Home Business 10 Things to Watch for at COP27 in Egypt 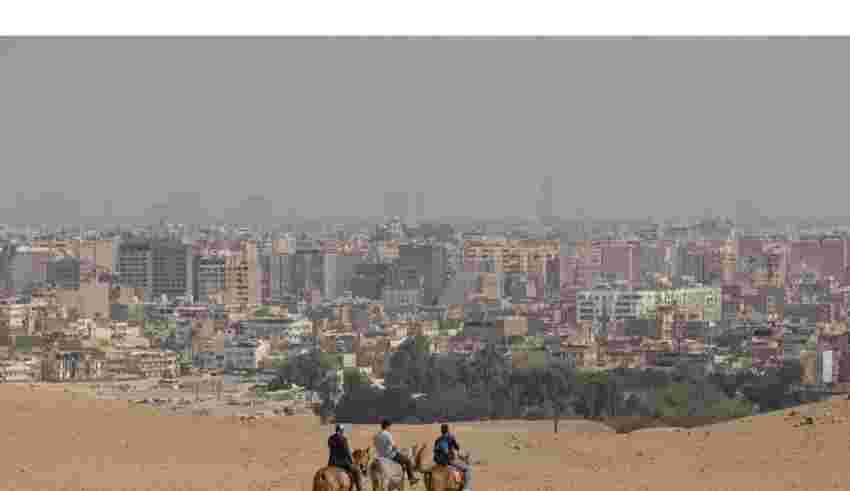 (Bloomberg) — The world faces threats from war, an energy crisis, and the risk of a global recession, but climate change is by no means a sleeper issue this year. Deadly extreme weather events have struck almost every corner of the planet in recent months, reminding leaders and citizens of the need to act fast.

Few nations have more at stake at the COP27 gathering in the Egyptian seaside town of Sharm el-Sheikh than Pakistan, the country exemplifying the deep inequality lying within the climate change conundrum. Pakistan contributes less than 1% of planet-warming fossil fuel emissions today, but this summer it suffered devastating rains made worse by climate change that flooded a third of its territory and caused an estimated $30 billion in damages.

“The global North must realize that this is a global issue which is impacting developing countries at the moment in a disproportionate way, but its impacts are climbing and they are spreading,” said Munir Akram, the Pakistani diplomat chairing the G77 group of developing nations. “It’s the ultimate test of human rationality to be able to work together despite all the differences that we have politically.”

Disagreements over who should pay for the harm done by climate-driven extreme weather events will be at the heart of discussions at COP27, the first to be held in Africa since 2016. While developing nations want to see compensation for the impacts of a warming they didn’t cause, rich countries remain wary of opening a door that could lead to unlimited financial claims.

Some past COP meetings have resulted in landmark agreements that shaped humanity’s fight against climate change. In 1997, signatories of the Kyoto Protocol acknowledged that the planet was warming because of manmade greenhouse gas emissions and committed to reducing them. In 2015, global leaders agreed under the Paris Agreement to make the necessary emissions cuts to keep global temperatures below a 2C increase by the end of the century, and ideally close to 1.5C.

COP27 is unlikely to land a historic deal in that fashion. Labeled as the “implementation” COP by the Egyptian presidency, it instead aims to turn past commitments into reality.

Here are 10 things to watch out for in this year’s climate gathering:

Who’s going – and who isn’t

Over 100 heads of states and governments will descend into Sharm el-Sheikh for the conference. Among the most relevant names are US President Joe Biden, Brazil’s presidential election winner Luiz Inacio Lula da Silva and UK premier Rishi Sunak, who made a U-turn on an initial decision not to turn up after former Prime Minister Boris Johnson announced he was attending. Also there will be European Commission President Ursula Von Der Leyen, along with European leaders like France’s Emmanuel Macron and Germany’s Olaf Scholz.

Possibly the most relevant absence will be that of Chinese leader Xi Jinping, although activist Greta Thunberg’s decision not to go made headlines too.

There’s little time for frivolities as the first day is expected to be dominated by an agenda fight over a key bit of climate jargon: loss and damage. That’s the term used to describe the economic and cultural devastation caused by centuries of unchecked fossil-fuel use by industrialized nations.

While it is looking increasingly likely that there will be such an agenda item, the key question is what it will cover. Developing countries and small island states want a clear reference to new funding facilities that will help cover the loss and damage caused by increasingly extreme weather events, but the US and the EU are loath to be on the line for what they see as potentially unlimited compensation claims. The outcome of the fight has the potential to make or break the summit right from the start.

“We shouldn’t discount the importance of just having this on the agenda,” said Ani Dasgupta, president and chief executive officer of the World Resources Institute, a nonprofit research organization. And if it doesn’t happen, “there’s a big risk of vulnerable countries walking away from this.”

Should they walk away, it’s because they’ve been burned before. Rich countries have repeatedly failed to live up to a pledge to provide $100 billion of climate finance annually — a goal that is already seen as woefully insufficient to cover poorer countries’ needs. One of the key barometers for success will be realizing that goal, but also working on a post-2025 climate finance target that could be in the trillions of dollars. In addition, last year’s outcome called for a doubling of adaptation finance to help the global south future-proof themselves for worsening climate impacts.

Mobilizing trillions of dollars will not be possible without the support of the private sector, but there are still major doubts over its commitment to the climate and whether it can prevent “greenwashing,” especially as the climate crisis has once again boosted the allure of fossil-fuel investments. Multilateral development banks — like the World Bank, the International Monetary Fund and the European Investment Bank — will also be in the spotlight to stump up more cash.

UN climate summits have tended to focus on the responsibilities the richest owe to the poorest, often leaving out one key demographic that will be crucial to transition: coal-reliant middle-income countries. An $8.5 billion package for South Africa was announced last year in a bid to redress that, and there are plans afoot for more. Indonesia could announce its own Just Energy Transition Partnership alongside donors like the US and the EU at the Group of 20 meeting in Bali, which runs during the second week of COP27. Similar deals with Vietnam and Senegal are in the pipeline before the end of the year, while one with India is slated for 2023. Also watch to see if rich donor countries and South Africa finally agree on how the funds are spent.

Since its unveiling last year, the Global Methane Pledge — a commitment to cut emissions of one of the most potent greenhouse gases by 30% by the end of the decade — has garnered more than 120 signatures. China and India are the main absentees, but there is hope that the former may still announce its own methane-cutting plan during COP27. Work is ongoing to get other major methane emitters like Algeria, Azerbaijan and Turkmenistan to sign up.

The main thing now is to show that countries are making efforts to actually live up to that commitment, especially as emissions are still rising. Watch out for a methane ministerial meeting that includes all the signatories, as well as a joint declaration by fossil-fuel importers and producers on how they plan to clean up. Countries will also present their status reports, which will likely show that cutting emissions is still an uphill struggle. The EU, for example, is making major progress on cutting discharges in the energy and waste sectors, but doing the same for agriculture remains near impossible.

One COP after delegations agreed on rules or a global carbon market under the Paris Agreement, negotiators at COP27 will need to establish strict guidelines to ensure the credits used in the global carbon market represent real emissions reductions. The current agreement allows for the trading old carbon credits that don’t necessarily reduce emissions.

Countries can update their climate commitments any time under the Paris Agreement, and many committed to do so at COP26 in Glasgow. Very few of these commitments have been honored, but watch out for surprise announcements at the meeting in Sharm el-Sheikh. Last year, India unexpectedly set a net-zero emissions target for 2070.

Negotiations at COP27 will be highly technical, with delegates likely to spend hours fighting over commas and wording. But diplomats will need to keep in mind that, despite recent progress, the world is still on track to warm above the 2C target set by the Paris Agreement. The latest research forecasts warming between 2.1C and 2.9C by the end of the century and scientists warn the window to act is closing fast.

The over 45,000 people accredited for COP27 include climate diplomats, but also some of the world’s most famous people. Last year, actor and water activist Leonardo DiCaprio turned up, along with actress Emma Watson and former US President Barack Obama. Expect actors and singers to liven up the mood, and to gather crowds of enthusiasts.

And the serious side

Traditionally, mass protests by climate activists have brought the voice of global citizens to an otherwise dull and secluded gathering. This time might be different, with activists reporting unprecedented difficulties and unaffordable costs to arrive to Sharm el-Sheikh. Still, on everyone’s minds will be prominent Egyptian-British activist Alaa Abd El-Fattah, who is currently in jail and started a hunger strike last April. Abd El-Fattah has vowed to stop drinking water on the first day of COP27.

—With assistance from Jennifer A Dlouhy.