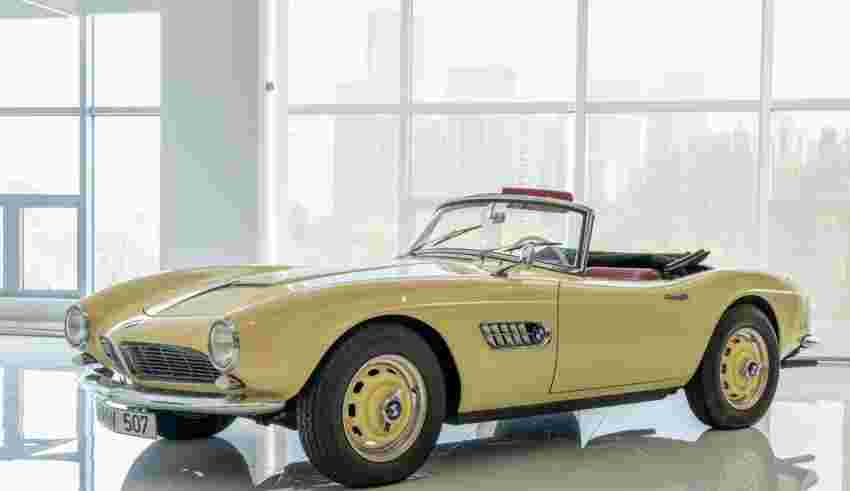 For all its industrial might, the United States’ automotive sector arguably failed to produce anything, particularly sporting until the arrival of the Chevrolet Corvette. It was a gap in the market that was filled for decades by affordable sports cars from the likes of Austin-Healey, MG and Triumph. US importer Max Hoffman was one of the first to recognize an appetite for higher value, higher performance cars. After introducing American buyers to the Mercedes-Benz 300 SL and Porsche 356, he convinced BMW to tempt customers with its own prestige offering: the 507 Roadster.

Entering production in 1956 and aimed squarely at US buyers, the 507 was a glittering jewel of a car styled by New York-based designer Albrecht von Goertz. The strict two-seater was both elegant and sporting, with a shark-like body created from lightweight aluminum and dripping with luxurious chrome embellishments. It was a machine that emanated both class and exclusivity, built for silver screen starlets and cruising down Sunset Boulevard on hot Hollywood nights.

Beneath that sensuous coachwork lay a shortened version of BMW’s 501-series chassis, equipped with double wishbone and torsion bar front suspension, a Panhard rod-located live rear axle, and Alfin drum brakes at each corner. The package was completed by a glorious V-8 soundtrack courtesy of an improved version of the 3.2-liter engine found in the 503. Thanks to a higher lift camshaft, revised ignition timing, and a higher compression ratio, the newly minted M507/1 could deliver 152 PS, which was channeled to the rear wheels via a four-speed manual gearbox. These revisions—coupled with a relatively low kerb weight—meant the 507 could reach 97 km/h in around 11 seconds, on its way to a respectable top speed of 201 km/h.

By the summer of 1957, the 507 had undergone changes to improve both cabin and boot space, resulting in the first 34 cars being retrospectively titled as Series Is. The redesigned Series II featured more room for driver, passenger, and luggage, while also refining the dashboard and stowing of the fabric roof. Already an order of magnitude more expensive than Hoffman had initially intended, the redesign pushed the asking price to $10,500—more than three times that of a Porsche 356 Speedster. Due in no small part to the colossal price tag, just 252 BMW 507 Roadsters were built during three years of production, ensuring the model remained one of the most desirable and exclusive machines ever built.

Chassis 70143, a Series II Roadster, was completed on 12 June 1958 before being delivered to Casa dell’ Automobili in Rome on 19 August. Originally finished in Dolomite Grey, little is known of the 507’s early life until its reappearance in March 1973, when it was offered at auction in Geneva. It is believed to have passed into the care of a prominent Swiss BMW dealer, who is understood to have had it restored before finally selling the car in 2013. Photographs of the car mid-restoration feature in Michael Kliebenstein’s SuperFinds, published in 2020, while correspondence with BMW confirms that both chassis and engine numbers match factory records. In recent years, the BMW has formed part of an automotive museum exhibition. As a result of its time spent on static display, this car will require mechanical inspection prior to returning to road use.

Today, chassis 70143 is smartly finished in cream paintwork with matching wheels over a red leather interior, and presents a rare opportunity to step into one of the most celebrated BMWs of the 20th Century.