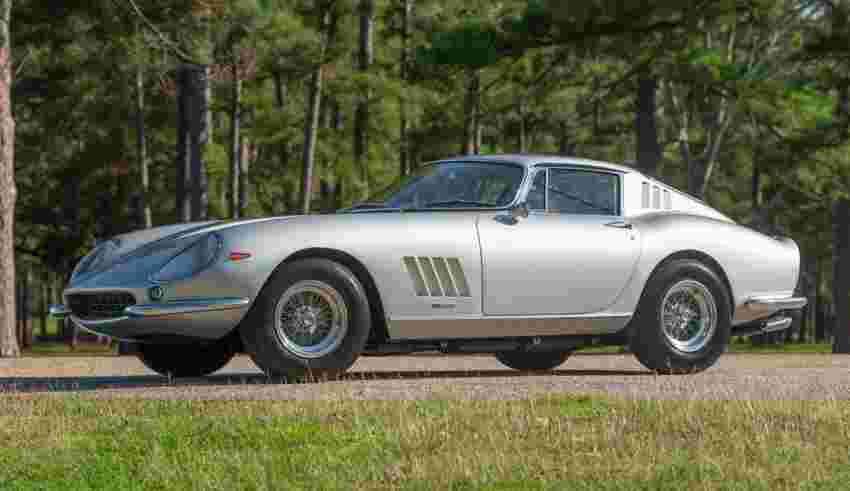 EVOLUTION OF A PERFORMANCE ICON

At the Paris Motor Show in October 1966, Ferrari introduced an upgraded version of the 275 GTB that had debuted two years earlier. In most respects, the new car was nearly identical to its predecessor, as it also employed the long-nose body style that had been adopted later in the original 275’s production run to prevent front lift at speed.

The major difference in the new car was under the hood, where an upgraded version of Gioacchino Colombo’s short-block, 3.3-liter V-12 engine (now dubbed the Type 226) was fitted with dual overhead camshafts; this was the first appearance of such valve actuation in a production Ferrari road car. A slightly modified hood with a raised center section was added to the Scaglietti bodywork to accommodate the taller engine profile. Equipped with dry-sump lubrication and six Weber 40 DCN/9 carburetors, the new engine developed 20 horsepower more than its predecessor, giving the nimble 275 chassis an added jolt of performance. The GTB/4 was also standard equipped with a revised driveshaft arrangement in a solid torque tube, effectively eliminating vibration issues that often plagued the earlier variants.

The new four-cam 275 Berlinetta was Ferrari’s most dynamic road car yet, and it would forever be remembered as the last of the classic V-12 front-engine models, as the forthcoming 365 GTB/4 would feature completely different aesthetics, marking a transition to 1970s styling. Only 330 examples of the 275 GTB/4 were produced before the model was discontinued in 1968, adding a degree of rarity to the revered Ferrari, as well.

Benefitting from 45 years of single-family ownership and in largely original condition, this well-presented 275 maintains a remarkable purity. According to the research of marque expert Marcel Massini, chassis number 10325 is approximately the 203rd example of the 330 four-cam cars. It was specified for the American market with instruments in miles and equipped with power windows and full leather seats. Finished in Grigio Argento paint over an interior of Nero Vaumol Connolly leather, the berlinetta was sold new through Luigi Chinetti Motors in Greenwich, Connecticut in September 1967.

According to a SEFAC invoice on file, the Ferrari was initially purchased the same month by Barnett Sumski, a resident of Tiburon, California. It appears that Mr. Sumski bought the car with the intention of using it for European touring, as it was immediately registered with Italian tourist plates, implying that the owner took delivery at the Maranello factory. Indeed, Mr. Massini’s research demonstrates that the car was serviced soon thereafter by the Ferrari Factory Assistenza Clienti in Modena before being exported in October 1967, shipped from Milan to San Francisco via London.

In December 1967, Mr. Sumski sold the 275 to its second owner, G. Ernest Lopez, who was an attorney based in San Leandro, California. Mr. Lopez kept the GTB/4 about a year before selling it to Ferrari distributorship Modern Classic Motors, William Harrah’s well-known concern based in Reno, Nevada. By this time a Motorola AM/FM radio had been installed.

In 1971, the Ferrari found more lasting ownership when it was acquired by Wade Carter Volkswagen in Seattle, Washington. Wade Carter was a respected and accomplished dealer in the Pacific Northwest, first practicing his trade in the 1950s in Salem, Oregon, before founding his own dealership in Seattle. Also an avid amateur racer, Mr. Carter amassed a significant collection that included marques such as Bentley, Ferrari, Jaguar, Porsche, and Rolls-Royce.

The 275 became a centerpiece of Mr. Carter’s collection, and he retained possession for many decades. Following his passing in 2001, his family continued to keep the Ferrari for another 15 years before offering it for sale in March 2016, capping a remarkable period of almost 45 years of single-family ownership. Some years prior, the GTB/4 underwent at least one bout of mechanical maintenance, including reappointment of the seats with proper Nero leather upholstery, rebuilds of the brakes, master cylinder, slave cylinder, and wheel cylinders, and installation of new exhaust tips. In preparation for the 2016 offering, the car was reportedly submitted to the racing shop J&L Fabrications in Seattle, whose specialists rebuilt the carburetors and distributors, and serviced the ignition system. At this time the wire wheels were also reconditioned.

By the end of 2016, the Ferrari was acquired by the consignor, a significant collector based in Louisiana. The 275 has accrued very little mileage during present ownership, mostly being stored in a climate-controlled facility. In addition to other freshening measures, the car was dispatched in July 2017 to the respected shop Restoration & Performance Motorcars in Vermont, and the type 213/226 engine was treated to a comprehensive rebuild that cost $44,855, according to an invoice on file. It is worth noting that the car retains component stampings that demonstrate the continued presence of the matching-numbers chassis, engine, and gearbox.

Still presenting in exceptionally original condition thanks to fastidious attention by just four caretakers, and documented with a sizeable file of paperwork, this wonderfully maintained 275 GTB/4 is a highly desirable example of Maranello’s celebrated late-1960s berlinetta. It is ideal for marque enthusiasts searching for well-preserved examples benefitting from a minimal ownership chain, offering the potential for concours presentation or touring enjoyment, and worthy of the legendary cry, “Forza Ferrari!”

This vehicle will be offered at RM Sotheby’s Arizona sale, kicking off the 2023 collector car auction calendar 26 January. View more and register to bid online at rmsothebys.com today.