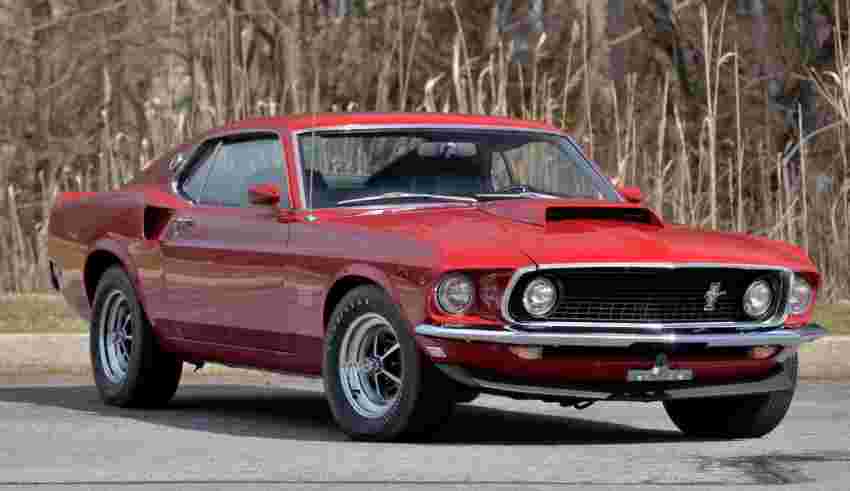 This Candyapple Red example of Ford’s mighty Mustang Boss 429 (KK No. 1934) remained with its original owner until 2013. That owner kept much of his sales documentation, including dealer paperwork, a “welcome” letter to him from Ford and a copy of the original title. Further verification of the Boss Nine’s provenance comes from a build sheet and a Marti Report.

Earlier in its life, the Mustang was restored, and that work was recently freshened by Anghel Restorations of Scottsdale, Arizona, using a selection of NOS parts. The car has also had a brush with fame, having appeared on YouTube’s “Jay Leno’s Garage.” The Mustang retains its original driveline, including the matching-numbers 820-T version of the Boss 429 engine. The 820-T engines were the second batch of Boss 429s built in 1969, made with lightened rotating assemblies to help them rev faster. Behind the engine is the Boss’ original close-ratio Toploader 4-speed manual transmission, sending the engine’s 375 HP and 450 lb-ft of torque to the Traction-Lok differential with 3.91 gears. The chassis retains its power steering, power brakes and suspension, including what Ford called its “ultra-heavy-duty performance front and rear springs and shock absorbers” and “extra-heavy-duty competition front and rear stabilizer bars.” At each corner are the correct Magnum 500 wheels with flat-black inserts that are found only on Boss Nines.

The Mustang’s black Comfortweave bucket-seat interior is accessorized with the Deluxe Décor group and an AM radio—a simple sound system that won’t take anything away from the rumble of the “shotgun” mill underhood. Considering the Boss 429 was the peak of Mustang performance in 1969, the cars were far more subdued than other muscle machines on the streets. The massive, functional hood scoop was painted body color in 1969, and a simple “Boss 429” decal on each front fender identified this NASCAR homologation special.