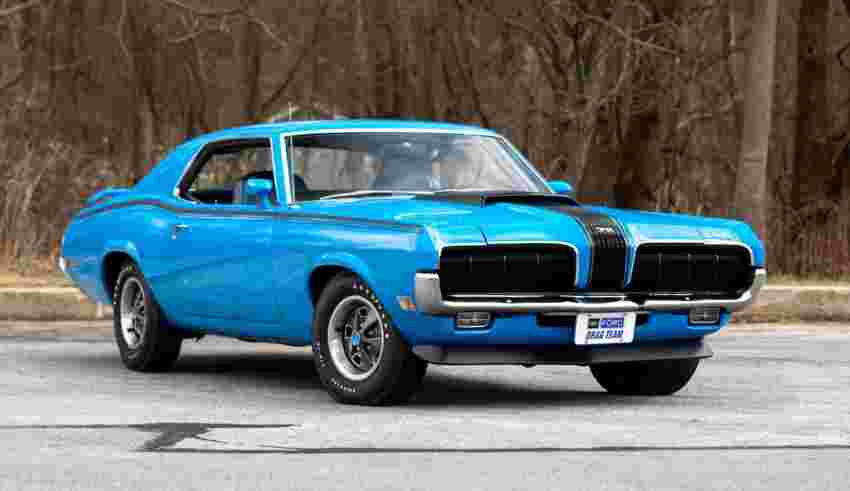 The production figures listed in this Cougar Eliminator’s Marti Report indicate that it is the only one that Mercury built in 1970 with its unique combination of speed equipment and optional accessories. While there were more than 70,000 Cougars built in the 1970 model year, just 2,268 of them were the hot Eliminator models. The Cougar Eliminators were cats apart from the rest with their bold hood and fender stripes, a hood scoop, front and rear spoilers and three high-performance engine options.

This Competition Blue Eliminator has the rarest of the three V-8s—the 428 Cobra Jet, which had power ratings of 335 HP and 450 lb-ft of torque. The car’s Drag Pak option—consisting of a beefed-up bottom end, external oil cooler and 3.91 gears in the Traction-Lok rear end—not only upgraded the Cobra Jet to Super Cobra Jet status, but also made this Cougar rarer still as one of 127 built. Cougar Club Eliminator Registrar David Wyras said this car is one of five that combined the Drag Pak option and a C6 automatic transmission (“Select-Shift” in Mercury speak). Collectors take note: the Cougar’s driveline, from the matching-numbers 428 SCJ to the nodular rear end, is factory-original equipment.

All Cougar Eliminators with the 428 CJ were equipped with Mercury’s Competition Handling Package, which included firmer springs and shocks, as well as a larger front sway bar. Also ordered for this car were the optional power front disc/rear drum brakes and power steering. F70-14 tires were standard equipment; on this Cougar, they are mounted on Mercury’s optional styled-steel wheels. The Cougar’s interior includes blue vinyl high-back bucket seats and a console surrounding the C6’s floor shifter. An earlier restoration by Cougar Specialist KTL Restorations retained the car’s original sheet metal, and, more recently, the car went to Marcus Anghel of Anghel Restorations of Scottsdale, Arizona, for the addition of NOS components and freshening to make this car as factory-correct as it can be.