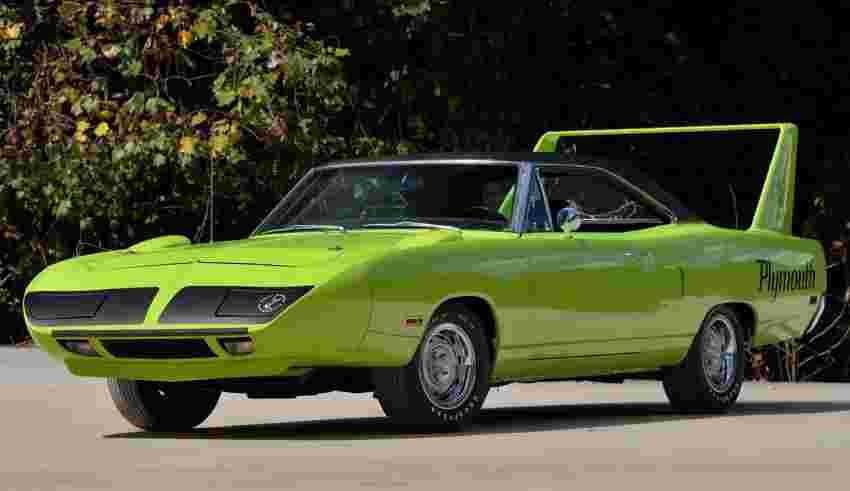 There will always be “the one,” that single item that stands apart even amongst its peers. This particular Superbird is a car that could anchor any collection, even among other Superbirds. Of the 1,920 units constructed, just 135 were Hemi-powered, and this car is one of only 58 4-speed Hemi Superbirds to be delivered new by Plymouth. Of all six standard paint colors offered, FJ5 Limelight Green was the lowest volume color known, applied to approximately 11% of the overall production run. Add in the individual options on this car, and it is certainly one of one as equipped.

As expected, the 426/425 HP Hemi V-8 engine here features the components that made it legendary. Two Carter AFB 4-barrels, large-port hemispherical heads, high-flow exhaust manifolds with H-pipe exhaust, a NASCAR-developed reciprocating assembly and performance ignition were all standard equipment on this engine. It is backed by the D21 Hemi A833 4-speed manual transmission, which in turn mandated the A33 Track Pak with its Dana 60 Sure Grip differential and 3.54:1 final gearing, as well as power steering, power brakes with front discs and heavy-duty cooling equipment. Ordering the Hemi installation automatically upgraded the frame and suspension as well.

The FJ5 exterior color was an added cost, and the Superbird-specific components were installed accordingly. The replacement steel rear window opening meant a black vinyl top, while the rear wing, nose cone and rear-facing fender scoops were finished in body color. In the case of this car, the interior is black vinyl but features premium pieces led by the rare rim-blow steering wheel, bucket seats with a center fold-down buddy seat, an AM radio with 8-track player, the Tic-Toc-Tach and a Hurst Pistol Grip shifter. Outside, the unique hood uses functional pins as part of the actual hold down, while large Plymouth fender decals, Road Runner trim accents and chrome exhaust tips complete it.

Among the provenance included are a broadcast sheet and window sticker, plus copies of historic titles. The combination of this car’s options and driveline allowed its original owner to have a dream car, as very few people spent the money for some of them, such as the AM/8-track radio and rim-blow steering wheel, both which added significant cost after purchasing the more than $800 Hemi engine. For those who want a Hemi Superbird that will make even people who know these cars pay attention, this one has few, if any, equals.

This vehicle will be offered at MECUM Auctions annual Kissimmee Florida,  The World’s Largest Collector Car Auction®, along with almost 4,000 cars and thousands of Road Art items.  Taking place January 4-15, 2023.  View more cars and register to bid online at https://drive.mecum.com/kissimmee-2023.