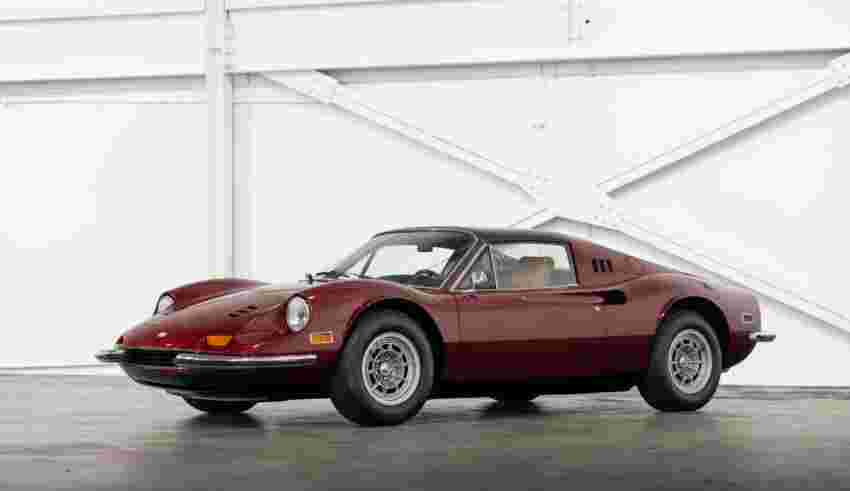 Completed on 4 April 1973 this 246 GTS was specified in Rosso Cordoba over Beige Scuro Connolly leather with black inserts. Dino afficionados will know that ‘Daytona’ style seats were introduced as an available option over the course of E-Series production. Additionally, in late 1972, the list of optional features grew to include 7.5in Campagnolo wheels with fender flares. Now knows as ‘Chairs and Flairs’ the option was largely limited to US bound examples. According to Matthias Bartz’s authoritative book on the model, Dino Compendium, it is estimated that only 200 to 300 vehicles were equipped with this option making them among the highest prized examples.

Chassis 05004, destined for Bill Harrah’s Modern Classic Motors in Reno, Nevada, was re-directed to Algar Enterprises in Paoli, Pennsylvania instead. Serving as the company car for one of the dealerships part owners through the end of 1973, it was then dispatched in 1974 for a magazine test. In February 1974 chassis no. 05004 would serve as the cover car on Road & Track magazine where it featured prominently in an eight page sports car comparison article. An original copy of the magazine is on file and included with the car. By 1980 it passed to Frank Higgins of Flourtown, PA now painted black.

In 2016 after three decades of ownership the car was offered for sale as a restoration project. The car, partially disassembled, but was offered complete with the assemblage of parts that were removed. Shortly thereafter the car was sold to a very experienced and prominent Ferrari collector in Florida who commissioned GTO Engineering in the UK to fully restore the car. Work began in March 2017 and finished in 2019. A complete restoration, nothing was left undone with a total of £300,000 of invoices on file and available for review. Emerging from restoration in early 2019 now returned to its original and splendid colors of Rosso Cordoba over Beige Scuro. Only 51 cars were finished in Rosso Cordoba originally.

Now fully Ferrari Classiche Certified as fully matching, chassis no. 05004 is offered with a set of books, corresponding leather pouch, and a tool roll. This Dino, just three owners from new, specified with Rosso Cordoba paint in ‘Chairs + Flairs’ surely must be one of the finest examples in the world.