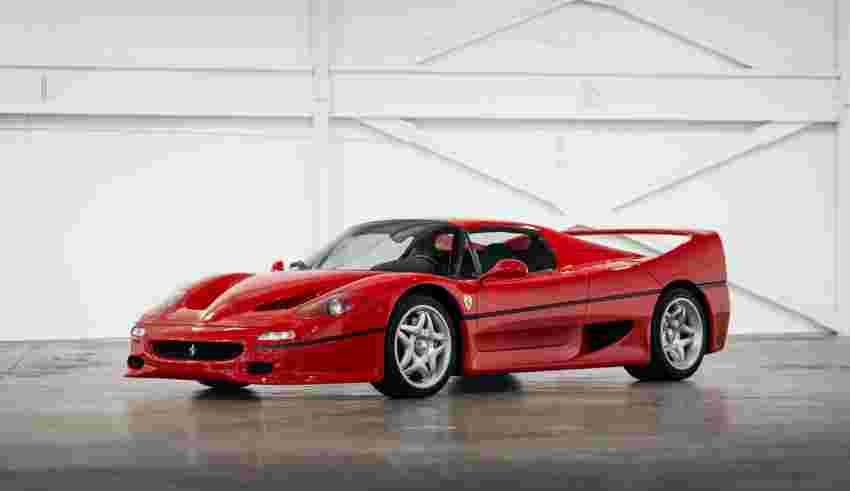 With only 349 examples produced of the F50, production number 206 of 349 may very well be the reference example. With only 179 km from new it is quite likely the lowest mileage example in the world. In fact, very little has changed since delivery to Damgaard Nielsen Ferrari of Denmark on 19 December 1996. With the rise of ‘instant collectibles’ and the seemingly endless flood of new cars from manufacturers today, it only takes a few clicks of a mouse to find the newest undriven supercar. However, the F50 represents something different entirely with only 349 examples and Ferrari’s final open-top, manual V12 supercar.

The lowest mileage example to come to market in the past decade had 1,318 km (819 miles). Production number 206 is in a different category entirely with only 179 km from new. Furthermore, if one were to omit the 1,318 km example from consideration, the next example would be a comparatively ‘well driven’ 1,100 mile (1,770 km) example before working one’s way further down the ranks to a typical example with 5-10,000 miles. Finding a true delivery mileage F50 was thought to be virtually impossible.

Those who have inspected or are familiar with any 1990s supercar know that condition is paramount. Mileage is only one measure of a car and other aspects of condition can become apparent if one were to only look at the odometer. While the odometer may indicate ‘as-new’ condition, one will not be disappointed when looking over 206. The Alcantara dash, which customarily suffers from stretching and subsequent wrinkles due to sunlight is pristine, presumably from never leaving the garage. Further still it has been known for the carbon fiber to yellow and brown overtime with heat cycles and UV exposure – a phenomenon which is absent here. Of course, it goes without saying with only 179 km the underside of the nose has not suffered the usual rash from curbs or speed bumps.

Fully Classiche certified in March 2018 with all original engine, chassis, and body, 206 of 349 is offered with flight case, roll bars, soft top, books, three-piece luggage, tools, and the ultra-rare F50 flashlight. With luggage still in the original bubble wrap, original tape on the flight case, and a mere 179 km, a collector looking for absolute perfection would be hard pressed to find a better preserved example.