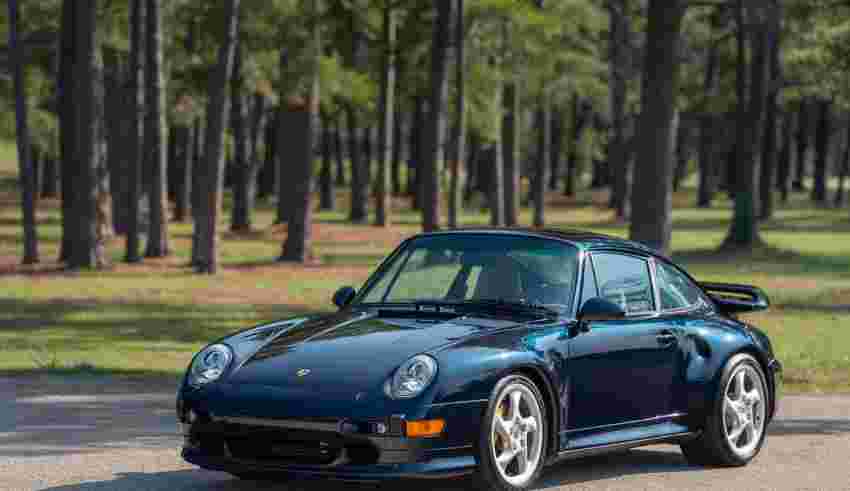 Porsche built its reputation and enduring legacy on air-cooled engine performance, starting with the 356. This was followed in 1964 by the arrival of an evolutionary six-cylinder successor called the type 901 and badged as the 911. One of the most successful stories in automotive history, with a continuous production run nearing 60 years, the 911 offered a near-perfect blend of timeless looks, balanced handling, chassis and engine reliability, and performance perfectly suited to both the road and the track.

As air-cooled 911 development continued, Porsche occasionally debuted limited-production, high-performance variants to widespread acclaim. These included the Carrera RS in 1973, the type 930 Turbo in 1975, the all-wheel-drive variant of the type 964, and, finally, the ultimate iteration of air-cooled technology, the type 993 Turbo S—recognized by many enthusiasts as the ultimate air-cooled Porsche.

The type 993 Porsche 911 Turbo S provided a dramatic and fitting final chapter for the air-cooled era, being the last air-cooled 911 Turbo built by Porsche. A true limited-production model, 183 examples were manufactured for North America, each carefully and uniquely prepared by Porsche’s Exclusive department with bespoke features and numerous engine and chassis upgrades. Powered by a 3.6-liter flat-six engine featuring an alloy crankcase and cylinder heads, the Turbo S received larger twin KKK K24 turbochargers for instant throttle response and a new Bosch Motronic engine-management system modified to handle the additional output, which increased to 424 horsepower at 6,250 rpm for the US market. A secondary oil cooler was also added to better dissipate heat.

Many of the 993 Turbo S’s technical advancements were adapted from the legendary 959, including electronically controlled all-wheel drive—a first for the Porsche Turbo model. Stopping power for the Turbo S came from larger cross-drilled, multi-piston, ventilated disc brakes. To prevent brake fade during intense, extended driving sessions, Porsche added discrete air ducts near the fog lamps on the front valance and on the rear fenders above the wheels.

Production of this vehicle was completed in March of 1998 and the car sold new through Roger Beasley Porsche in Austin, Texas. Over the next two decades it was sparingly used, with just 22,017 showing on the odometer at the time of cataloguing. Service invoices from 2013 through 2015 document a shifter repair, clutch pressure reservoir replacement, and repair of the air-conditioning system. Also included is a copy of a Porsche Certificate of Authenticity.

Exhilarating performance, one-year, US-only production status, advanced 959-inspired engineering, bespoke features, and assembly by Porsche Exclusive with upgraded factory components throughout, the Turbo S came together in one definitive sports car that only select few Porsche enthusiasts could acquire in 1997. The serious collector seeking an exceptionally uncommon, elegant, and powerful turbocharged, all-wheel-drive Porsche could do no better than this fine example, the final evolution of Porsche’s air-cooled tradition, heralding an end to what many aficionados consider as the 911’s greatest era.

This vehicle will be offered at RM Sotheby’s Arizona sale, kicking off the 2023 collector car auction calendar 26 January. View more and register to bid online at rmsothebys.com today.