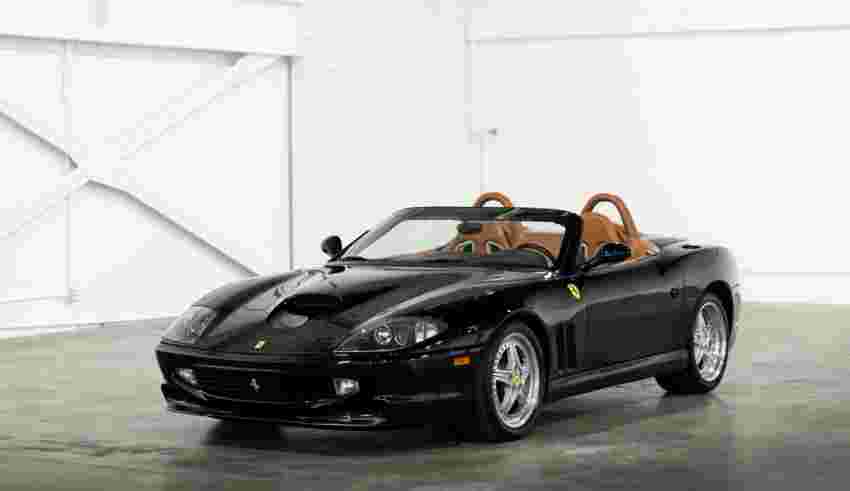 Ferrari introduced a roadster version of the 550 Maranello at the Paris Motor Show in 2000 to commemorate the 70th anniversary of Pininfarina. Here in the US, the model debut took place in the Solomon R. Guggenheim Museum in New York City. A fitting location for one of the most beautiful modern Ferrari’s produced. The 550 Barchetta was a true ‘barchetta’ (open-top) with no real convertible top provided. The factory did provide a cloth soft top, but it was intended only for temporary use to protect the interior from rain as using the top above 70 mph (113 kmh) was not deemed safe. In addition to speed limitations, the soft top is not quick to erect and is only be used in emergency situations when black clouds are imminent. The mechanical underpinnings of the car remained the same as its coupe counterpart but the engine was given a different internal designation. A total of 448 cars were produced worldwide with the minority of those destined for the US.

Delivered new to Miller Motorcars Ferrari of Greenwich this example is numbered 24 of 448. Specified in Nero over Cuoio leather the first owner certainly had taste and avoided the pitfalls of another Rosso Corsa example. Displaying just 5,007 miles from new, it presents as one would expect with such limited use. Retaining five-piece luggage set, books, and tools one would one be disappointed to learn US destined cars, like this example, did not include the open face leather encased driving helmets that European cars did. Last serviced in September 2021 at the cost of $15,782.78 (invoices on file) this spectacular looking 550 Barchetta is presents beautifully inside and out.