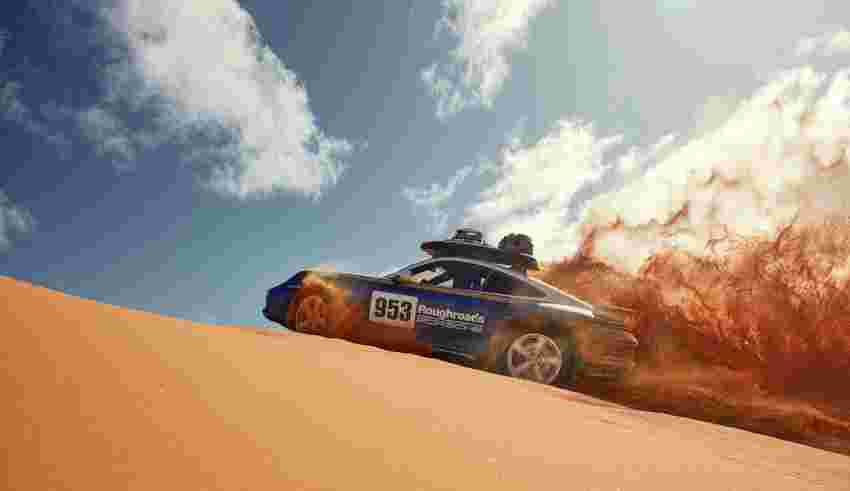 Following months of countless leaks and real-world sightings, Porsche has finally pulled the cover on its latest high-riding creation.

It’s called the 2023 Porsche 911 Dakar, and it’s a factory-built off-roading sports car. Its name pays tribute to the 1984 Paris-Dakar Rally, which showcased the first 911 ever to use an all-wheel-drive system.

The German carmaker’s well-known twin-turbocharged 3.0-liter flat-six powers the Dakar and delivers 473 hp and 420 lb-ft, all of which goes to all four wheels via an eight-speed PDK. It’ll rocket to 60 mph in 3.2 seconds and continue onto a top speed of 150 mph, which is limited thanks to its all-terrain tires. As standard, the Dakar also gets rear-axle steering, engine mounts out of the 911 GT3, and Porsche Dynamic Chassis Control.

The most significant changes live in its suspension. The Porshe 911 Dakar is 50 mm taller than a base 911 Carrera. However, a standard lift system can raise the car by an additional 30 mm when needed. According to Porsche, the goal was to achieve a ride height and ramp-over angles similar to an SUV. Its tallest mode is only available up to 105 mph, at which point it’ll return to its normal ride height.

Pirelli developed a new Scorpion All Terrain Plus tire specifically for the Dakar, measuring 245/45 ZR 19 in the front and 295/40 ZR 20 in the rear. These feature a tread pattern that is nine millimeters deep and reinforced sidewalls. Summer tires are also available, but the all-terrain set is standard.

To make use of its new equipment, the Dakar employs two new drive modes, Rallye and Off-Road. A new Rallye Launch Control system is available within those two drive modes and allows up to 20 percent wheel spin.

The 911 Dakar continues to borrow from the GT3 with a carbon-fiber-reinforced plastic hood with large air extractors. Out back, it features a fixed rear spoiler complemented by new flared fenders, rocker panels, and stainless steel elements throughout. Its unique air intakes feature mesh grilles to keep rocks and other small objects out.

Porsche offers a roof basket as an optional extra, which features headlights that plug directly into a 12-volt socket on the car’s roof. It can carry up to 92lb. However, a roof tent is also available if you’d like to sleep on your off-roading sports car.

Inside, the 911 Dakar comes standard with bucket seats and a rear-seat delete. These will feature Race-Tex upholstery as standard with contrasting Shade Green stitching. Porsche also employs lightweight class to keep its weight down, giving this off-roading sports car a curb weight of 3,552, or about the same as a Carrera4 GTS equipped with PDK.

An optional Rallye Design Package gives the 911 Dakar a two-tone White and Gentian Blue Metallic exterior, which pays tribute to the 1984 Dakar winning car. The Shade Green finish mentioned earlier is also available as an exterior color and exclusive to the Dakar.

Porsche plans to build just 2,500 units of its high-riding sports car, each with a starting price of $222,000 plus a $1,450 delivery fee. The first customer cars will reach dealerships in the Spring of 2023.