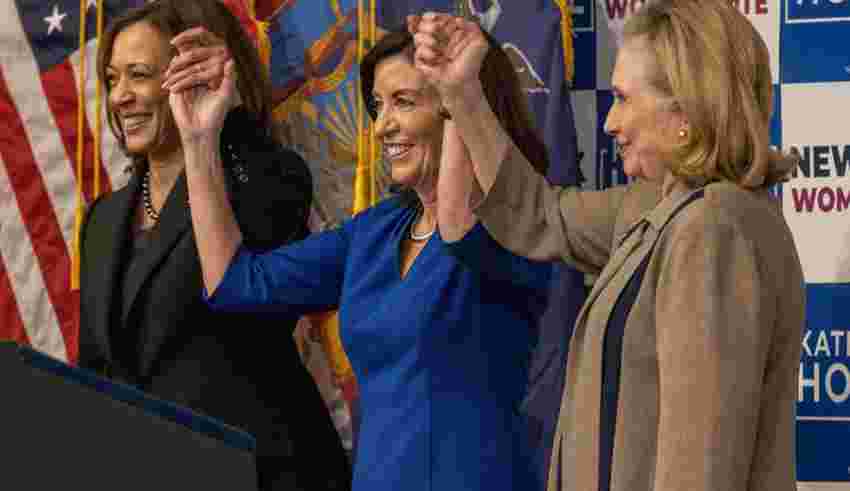 LIARS R US – three smiling vipers in NYC. Was Elizabeth Warren too busy to attend?

Bob McManus penned a few opinion pieces for The New York Post about the trio:

“Certain to be missing amidst the high-wattage smiles will be a woman who truly has something to say: Tammy Hudson, the mother of Keaira Bennefield — a 30-year-old Buffalo woman executed in front of her three children last month by an abusive husband free to kill because of New York’s cashless bail laws. Hudson blames Hochul for her daughter’s death; it’s a complicated matter, but she has a point. Hochul didn’t approve the bail “reforms” that arguably led to the shocking murder — but she’s done nothing to mitigate their impact, either.”

“I don’t know why [crime is] so important,” Hochul declared at the debate.

Hochul is choosing the ‘just ignore it’ policy for rampant crime that is ravishing the streets of the Big Apple and beyond.

“Sisterly solidarity was the order of the day at Barnard College Thursday — with Hillary and Hochul standing shoulder-to-shoulder before a cheering, fully committed array of feminism-centric true believers.”

It’s truly a sad day for the Democrats when these three politicians are considered role models for liberal ladies in the USA. Will clueless Kamala and the Hildebeast inspire citizens to sprint to the polls? Will the last-ditch push for female voters work? Let’s hope not.

Melissa Martin, Ph.D., is a freelance columnist published in various national and international newspapers. She is a semi-retired therapist and educator and lives in Southern Ohio.

Disclaimer (varies based on content, section, category, etc.): News articles on this site, especially those in the opinion category, may contain opinions of the author, and if opinion, may not necessarily reflect the views of the site itself nor the views of the owners of The Published Reporter. For more information on our editorial policies please view our editorial policies and guidelines section in addition to our fact checking policy and most importantly, our terms of service. All links on this site could lead to commissions paid to the publisher. Please see Advertising Disclosure in sidebar.