It seems as if their new attacking approach has worked wonders against a very dangerous England under Jos Buttler. Is this the start of India’s return to white-ball domination?

“We will not leave that thought process behind. For us, the aim is to understand white-ball cricket, how to play (as) new guys are playing. 50 over is an extension of T20 (cricket). Maybe you take less risk in ODIs as compared to T20 cricket but you have to take it,”

During their dismal T20 World Cup in the UAE last October/November, they were often criticized for taking the old-school type of approach, which was to keep wickets in hand, and then launch at the back end of the innings, which meant that they were not posting challengeable totals on the board.

If we look at their first two defeats to Pakistan and New Zealand, 151 and 110 were never going to be enough against those two highly talented sides. Part of that problem was not capitalizing on the first six overs. In the Pakistan game, Virat Kohli’s side were 36-3, and against New Zealand, they were 35-2, when you really ought to be 50 or 60-0.

You could say both New Zealand and Pakistan have high-quality bowling attacks, but if the top three had a little more intent and had taken a few more risks against them, rather than trying to play themselves in, there may have been slightly different outcomes to the totals they were setting.

if you look at the first two T20s in the England Series, Sharma’s side was 62-2, and 61-1, which meant that they were able to post huge scores of 198 and 170 on the board. Even though Suryakumar Yadav’s heroics nearly got them over the line, India was 38-3 inside the first six, which was always going to be a huge task to get 216 from there.

If the Men in Blue can consistently go hard at the top, particularly in the first six or ten overs, like England, they will be able to consistently put challenging scores on the board.

what is also impressive about the squad, is the depth of batting. when you have the likes of Hardik Pandya, Ravindra Jadeja, Shardul Thakur, and Harshal Patel down the order, this allows the top three or four batsmen to go a little harder, and continue the momentum throughout.

Look at England, why do the top three or four go hard, because they have the depth in batting to continue the process throughout the innings, which is why they struck fear in the eyes of the opposition, especially under Eoin Morgan’s Captaincy.

Another thing they did constantly well, was looking for wickets in the powerplay and middle overs, something which they failed to do in the early stages of the World T20 in the UAE. Pakistan was 40-0 in their first six and the Kiwis were 44-1, which meant that they were always in control of the chase. had India been braver with bat and ball, in terms of looking for more runs and wickets, then those two games may have been different in terms of their outcome.

This is exactly what they did in this series against England, 33-3, and 36-3 really put England on the back foot, particularly with the sheer pace of Umran Malik. Perhaps India could mix up their bowling combinations in the powerplay for each game so that batsmen find it difficult to adjust, i.e give Bhuvneshwar Kumar and Jasprit Bumrah the first two/three overs, and then bring Ravindra Jadeja or Umran Malik in the 5th or 6th Over.

We now move on to the three ODI’s with the first taking place on Tuesday at the KIA Oval.

This is India’s squad for that Series:

Sharma will most likely be opening with Shikhar Dhawan, but how they approach the powerplay will be fascinating, as the old India would generally look to keep wickets in hand and then launch in the final 15. England with no doubt will go hell for leather at the top with Roy and Bairstow for sure.

Will this three-match One-Day Series be the start of India’s return to White-ball dominance? 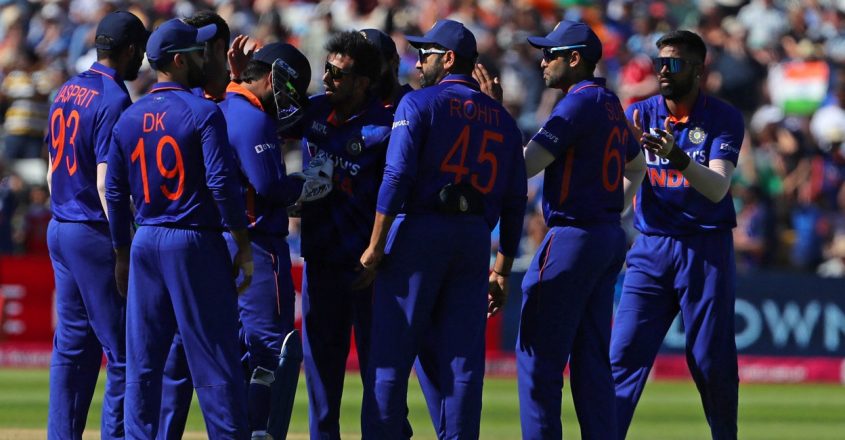