Home Automotive A Step Above The Rest 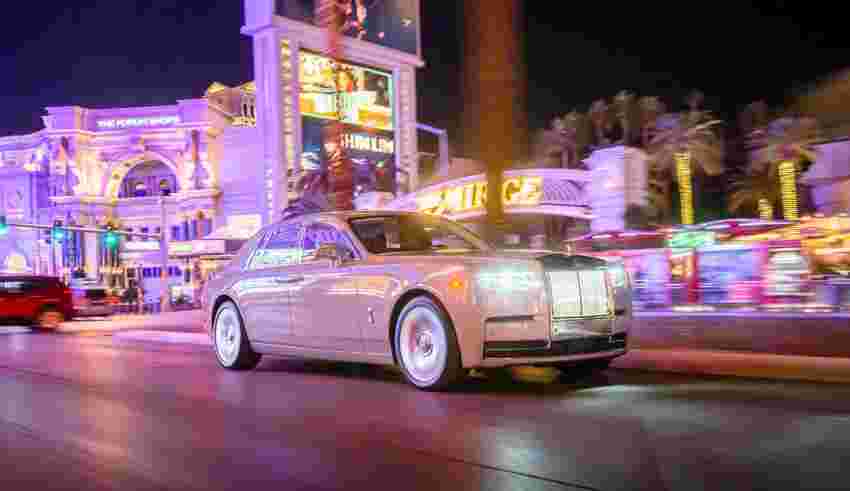 For decades, the Rolls-Royce Phantom has been the benchmark for how quiet, comfortable, and expensive a luxury sedan can be.

It is one of few vehicles that doesn’t have to consider value. With a starting price of $475,000, the new 2023 Roll-Royce Phantom is less about its individual skills and more about how they come together to deliver a unique driving experience. With its closest competitors costing half as much, this opulent machine can’t just be good. It has to be the best.

There’s also rising competition on its home turf. Previously, the delta between a Ghost and a Phantom was significant, but with the introduction of the former’s latest generation, that gap has closed dramatically. This recent innovation begs the question: is the brand’s flagship still a step above the rest? I recently flew to Las Vegas for a drive into the Valley of Fire to find out.

The eight-generation Phantom is now in its sixth model year, and Rolls-Royce recently refreshed it with the introduction of the Series II. If it looks strikingly similar to the car that debuted back in 2017, you’re not wrong. This update is more evolutionary than revolutionary, focusing less on exterior updates and more on available interior options. According to Rolls-Royce, the Series II is far more customizable than the car it replaces.

This new focus hasn’t stopped the British carmaker from implementing some exterior changes. These include new wheel options, a tweaked headlight design complete with laser-cut starlights, and an updated Pantheon grille. A clear indicator that you’re looking at a Series II is the new horizontal line that starts in the headlights and matches up perfectly with the updated grille. It accentuates the front end’s already squared-off design.

The newly available wheel options don’t rely on a business-as-usual approach to styling. Take the 22-inch Forged Painted Disk Wheel option as an example, a nod to 1920s design. This $13,000 set represents a real risk given how visually striking they are, yet their chunky design fits seamlessly with the Phantom’s proportions. There’s a similar adventurous theme going on in the interior, where a new limited Platino trim offers a fully silk interior. These new extras aim to increase the number of one-off cars rolling off the production line. According to Rolls-Royce, the goal isn’t to sell more cars but higher-value ones.

While Rolls-Royce did not engineer the Phantom with speed in mind, that doesn’t stop it from being properly quick. A 563-horsepower twin-turbocharged V12 sends ample power to the rear wheels via an eight-speed automatic transmission. Thanks to its 664 foot-pounds of torque output, even this 5,700-lb sedan can reach 60 mph in 5.1 seconds. However, these on-paper stats give little insight into how the Phantom actually drives.

What makes the Phantom’s driving experience is just how smooth it is, regardless of the driver’s inputs. Clever tuning delays throttle response so that this sedan doesn’t wake up and dash even if you mash the gas. Instead, it progressively delivers power as its speedo climbs. The same goes for its eight-speed transmission, which shifts nearly imperceptibly in the background, even during wide open throttle. There’s no way to change gears manually, and unlike the Black Badge Ghost or Cullinan, there isn’t a “Low” mode to extract a more aggressive demeanor.

There’s a pleasant disconnect from the road. Even as you cross triple-digit speeds, no wind or road noise permeates the Phantom’s cabin. It is startlingly quiet behind the wheel, easily dulling out a 130 mph run and making it feel more like 65 mph. The only proper indication of acceleration is a muffled bark from the sizable V12 up front. Even this subtle reminder of internal combustion will vanish shortly as the 9th-gen Phantom will be fully electric.

Quietness aside, the Phantom is easily the most comfortable vehicle I’ve ever tested. To say it glides over pavement is an understatement. There are moments behind the wheel where you eye a pothole coming up, brace for it, and nothing happens. It is almost as if the car flattens the road ahead. This is all thanks to the Phantom’s self-leveling suspension, which scans the pavement’s surface and adjusts the car’s dampening accordingly.

The Phantom’s steering is effortless. Its weight is unusually light like you could almost blow on it and turn. Rotating the wheel by grabbing onto its thin spokes is like waving your hands underwater. Even if you want quick and sharp movements, you get a dampened, slowed-down experience. It doesn’t translate any of the road’s imperfections. Instead, it builds on the foundation set by the sound deadening and suspension to disconnect you from the outside world.

Phantom owners spend most of their time puttering between fancy restaurants and five-star resorts, likely in congested cities across the globe. This is where Rolls-Royce’s rear-wheel steering system comes into play. It effectively shrinks the car’s wheelbase, allowing it to dominate tight spaces, making it feel much more like a standard large sedan than the luxury land yacht it truly is.

The Phantom is a car its owners will want to drive. Despite being a sizable luxury sedan, it isn’t best enjoyed from its back seats. Whether crossing a crowded city, tackling a large highway, or even on a scenic winding road, the Phantom offers a rewarding driving experience.

Read More Of Our Exotic Car And Supercar Reviews

The Phantom’s seemingly endless interior customization options make each car’s character unique. Whether it be a more classic take with wooden panels or a more modern interpretation with glossy finishes, each Phantom is a clear reflection of its owner’s creativity. With the introduction of the Series II, nearly every panel, surface, and material are customizable.

Tech-wise, the Phantom II remains mostly unchanged and follows a similar layout to what we see in the Ghost and Cullinan. In front of the driver sits a 12.3-in digital instrument cluster with three gauges and a 10.25-in retractable infotainment screen in the center. New to the Phantom is the Rolls-Royce Connected system, which interacts with the brand’s private Whispers app to deliver vehicle data such as location and condition.

Whether you sit in the plush chairs behind the wheel or recline in the second row, the Phantom offers heating, cooling, and various massage settings for all. The rear seats can be productive with their retractable picnic tables or comfort-focused with optional elevating footrests. Buyers can also choose between a standard row of seats or two individual ones.

Given its level of customization, the Phantom can now be more expensive than ever. Despite its $475,000 base price, the two cars I tested and rode in cost $628,300 and $651,450, respectively. However, more than enough options are available to get even closer to $700,000. Given its higher level of customization and substantial pricing increase, this is how the Phantom now differentiates itself.

Like the Phantom, the Ghost is also an opulent, quiet, and comfortable sedan. It gets most of the way there to what a Phantom offers from a driving perspective. However, the fine details allow the Phantom to achieve a level of disconnect from the real world like no car I’ve ever tested. Be it road imperfections, weather, or city noises, the Phantom dissolves them all. It’s as if the outside world doesn’t matter.

With the Series II, the Phantom further reinforces itself as the head of its household. It already delivers the most luxurious drive of any sedan on sale today. With its new customization options and one-off opportunities, it dives deeper into the heightened level of luxury that defines it. After all, what allows the Phantom to be a step above the rest is not what it does, but how it makes you feel.