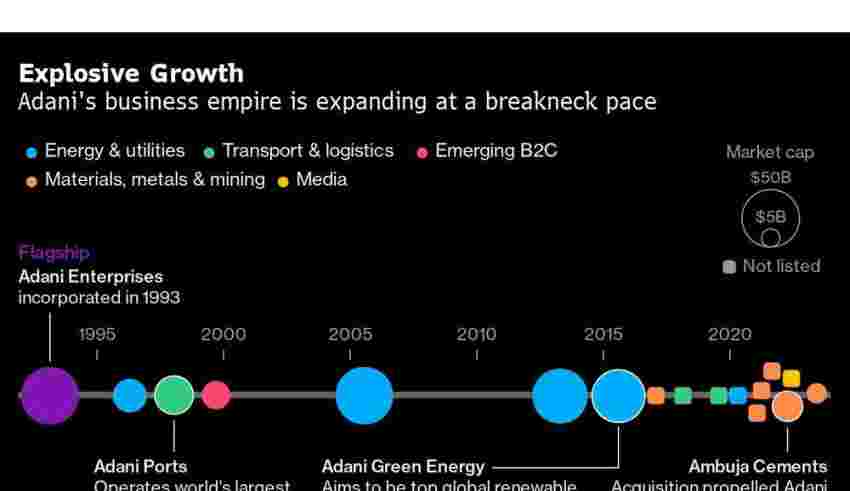 (Bloomberg) — Asia’s richest person, Gautam Adani, is considering setting up a family office overseas to manage his ballooning wealth, according to people familiar with the discussions.

The chairman of the ports-to-power Adani Group conglomerate is looking at Dubai or New York as the base for the office, which will invest the Adani family’s personal funds, the people said, asking not to be identified because the matter is private. The group’s founders are in the process of hiring a full suite of specialized family office managers, one of the people said.

The move comes amid a $58 billion surge in Adani’s personal wealth this year — the most among the world’s richest people, according to the Bloomberg Billionaires Index. It also reflects the tycoon and his family’s increasingly global ambitions, as the Adani Group makes significant overseas acquisitions beyond its traditional stronghold in India.

If Adani, with a net worth of $135 billion, follows through on this plan, he’ll join a crop of ultra-rich who have family offices to manage their wealth, personal investments and philanthropy. Hedge fund billionaire Ray Dalio and Google co-founder Sergey Brin have set theirs up in Singapore while Adani’s compatriot and Asia’s second-richest person, Mukesh Ambani, is in the process of opening a family office in the city-state, Bloomberg News reported last month.

The Adani family is currently talking to consultants and tax experts about the plans, the people said. The location of the office is still in flux, and may change based on the advice they receive and availability of resources. A spokesperson for the Adani Group, who also fields media inquiries for the billionaire, didn’t respond to an emailed request for comment on this initiative.

The tycoon’s elder brother, Vinod Adani, is based in Dubai and manages trading businesses there, as well as in Singapore and Jakarta. Vinod, who is the richest non-resident Indian in the world, according to the latest Hurun India Rich List, runs Adani Global Investment DMCC, a closely-held firm set up in 2016 to invest in commercial enterprises and manage them, according to the company’s website.

The Adani family’s $6.5 billion deal earlier this year to buy Holcim Ltd.’s two India cement makers was executed “through an offshore special purpose vehicle,” according to a media statement in May, showing the conglomerate’s growing clout in international financial dealings.

Adani is a first-generation entrepreneur who started off as a diamond trader in Mumbai in the 1980s before setting up an agri-trading firm. He later branched into coal trading and ports, and in the past few years, has been rapidly diversifying his sprawling infrastructure empire into green energy, airports, digital services, data centers, cement and media.

The Adani empire’s breakneck pace of expansion has in part fueled  blistering rallies in the shares of his listed companies, with the flagship Adani Enterprises Ltd. more than doubling in value this year for the steepest surge on the Nifty 50 Index. Those gains have fed the tycoon’s wealth gains, but have also sparked concerns that the Adani companies are trading at far higher valuations than global and local peers.