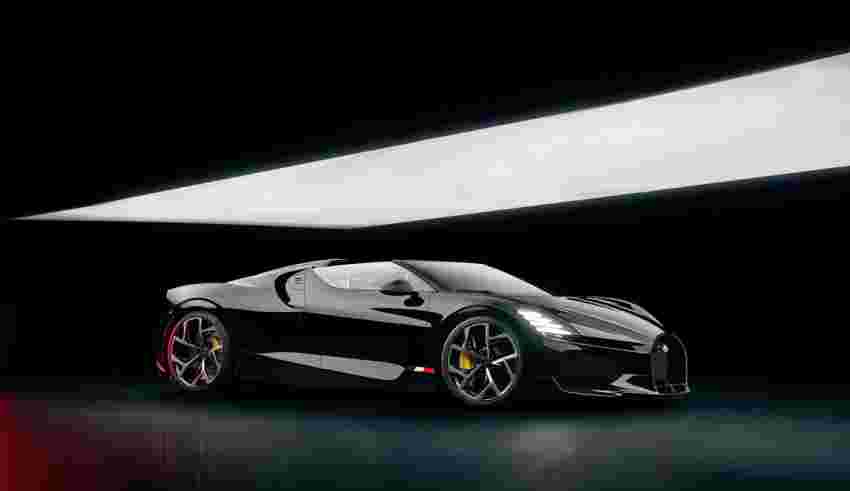 This year’s Monterey Car Week was a big one for Bugatti design director Achim Anscheidt, as he and the French carmaker unveiled the W16 Mistral — the brand’s final W16-powered vehicle.

Anscheidt joined Bugatti in 2004 and has worked closely with all of its VW-era products, from the Veyron all the way through to the Chiron and its many variants. The Mistral, however, is different. It required a clean-sheet design, structural changes, and bespoke elements not shared with other models.

This article appeared in our December 2022 issue.

Amid the Car Week hustle and bustle in August, we sat down with Anscheidt to chat about the Mistral, electrification, and which modern Bugatti is his personal favorite.

duPont REGISTRY: What was your primary goal when designing the W16 Mistral?

Achim Anscheidt: One of the main targets was certainly to wrap up the great story of the W16 engine. This is the last of its kind celebrating that engine. Stylistically, considering what that means, we had to assess how it would stand in a customer’s collection next to cars like the Chiron, Divo, La Voiture Noire, Centodieci, and Bolide. It’s almost the final piece in a collector’s Lego set.

dR: Were any parts of your original sketches changed as you moved to the production version?

AA: The car was actually more extreme. A couple of months ago, we were planning to make it a limited run as a show and display homologation. After we saw customer interest and how much the U.S. market means to us, we opted for worldwide homologation. That meant quite a lot of work for us because it needed to pass rollover, side, front, and rear impact tests. The result is what we see now.

dR: Was the W16 Mistral envisioned as a roadster from the very beginning?

AA: It was. We already have Divo as a car for more lateral acceleration. We already have Centodieci as an homage. We have La Voiture Noire as a one-off, one person, one customer, and we have the Bolide, which is the most extreme way to experience the W16 engine. If we did anything else coupe-wise, it’s just another one of those. So the roadster gets us out of that zone. This is the best for a collector to add to their collection. It’s not just another one-off. It’s something that has never existed before. The “few of” business is tricky. If you do too many “few of” programs, the “few of” becomes the new normal.

dR: What’s your favorite part of the styling?

AA: Aside from the taillight, it’s the translation of the Bugatti line. We’ve never done such a clean Bugatti line as we find it here. It starts at the horseshoe grille and is indirectly translated to the wheel arch. It’s not directly connected, but your eye continues on. We were able to design a new upper part for the car’s mono structure because it is a roadster, and this line has a chance to be so harmoni- ous and clean. For a car designer, this is great because everything transitions neatly.

dR: The W16 is a massive engine. How will smaller electrified powertrains affect future proportions and design languages?

AA: A new powertrain will offer opportunities for sure. This is always the most difficult thing. People very often do not know why things look sexy and nice. It is a proportion first. That setup might give us tastier proportions, which we are very happy about. But we are also very sensitive not to throw Bugatti DNA away just because we can. Our customers would not appreciate it if the modern-day Bugatti now looked like a Ferrari or a McLaren. We have such an individual, recognizable DNA from all sides that I think it’s sensible to bring this into the next stage of interpretation.

dR: Which is your favorite car you’ve designed for Bugatti?

AA: It’s obviously this one. They’re like kids to me. I’ve been responsible for 10 major cars in my career — actually, nine. I’m just finishing up the 10th, which is the Chiron’s successor. The cars we’ve produced over the last four years are very dear to me. They came in an era when Bugatti president Stephan Winkelmann forced engineering to do those “few of” projects. This is something that never would’ve happened over the years before. When Winkelmann came to our brand, he opened up these possibilities. It’s been fantastic in my old age to have still the chance to work on cars like this. And that’s the goal moving forward, to keep creating these sorts of expressions.

Responses have been edited for clarity.