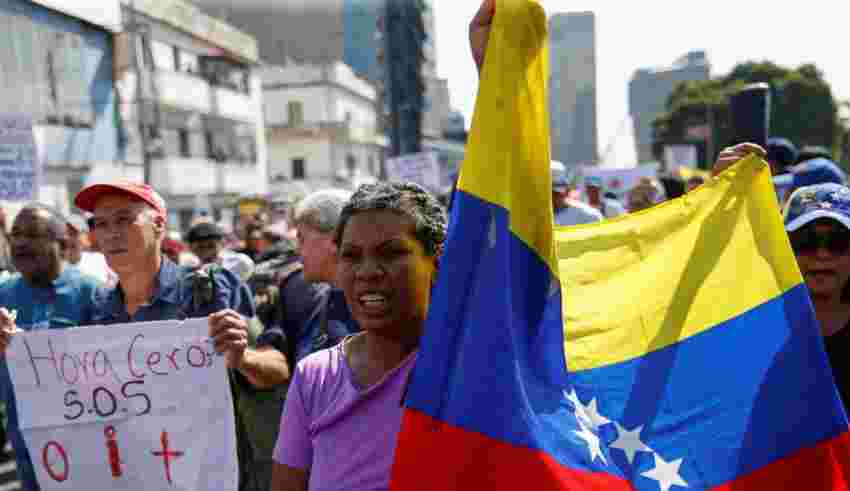 Teachers marched through downtown Caracas on Monday, the latest in a growing number of protests by public sector workers demanding higher wages as they fall behind in an economy that has embraced the United States dollar.

Hundreds of public school teachers were joined by nurses, pensioners and others who are paid in the rapidly depreciating local currency. The average monthly wage for teachers of around 500 bolivars — about US$25 — is barely enough to pay for public transportation costs, protesters said.

“As well as being a teacher, I am a nail technician, a baker and graphic designer,” said Ines Gil, 43, a teacher at a Caracas public school who, like others, donned black to symbolize her mourning for decent pay. “I have to do whatever it takes to survive.”

By allowing the dollar to freely circulate, President Nicolas Maduro’s socialist government helped orchestrate a rebound from the 2013-2020 economic crash — one of the deepest slumps in world history. But while many private sector employees now get paid in dollars, and are enjoying rising living standards, public sector workers paid in inflation-hit bolivars are being left out.

Workers organized at least 50 protests on Monday and more than 150 across the nation in the past week, according to preliminary estimates from the Venezuelan Observatory of Social Conflict, which tracks social unrest in the country.

In Monday’s demonstration, protesters ripped up and stomped on bolivars while chanting that they needed dignified wages to stay in their country. More than seven million Venezuelans have fled the country in recent years.

“Protests are daily in Caracas, but with 40 or 50 people,” said Carlos Julio Rojas, an activist who joined the march. “A protest like this, of this caliber, had not been seen in Caracas since 2019.”

Maduro may be reluctant to order a violent crackdown of the kind seen in the past. He is waiting for the release of more than US$1 billion frozen by U.S. sanctions, and another wave of bloodshed could cause Washington to block his access to the funds.

In a bid to calm the protests, the government gave Gil and other teachers a US$30 bonus on Sunday. The government has often appeased such protests with handouts and bonuses payments, but is unable to be very generous given its weak finances.

Bloomberg’s own Cafe con Leche index, which tracks the price of a cup of coffee, jumped 53 per cent in December. Venezuela’s central bank hasn’t published official inflation figures since October.

“I am sick and have no health insurance or money to pay for the scans I need,” said Heyra Vega, 49, who didn’t elaborate on her medical problems. “This time we’ve lost our fear. We’re tired of this situation.”

—With assistance from Fabiola Zerpa.