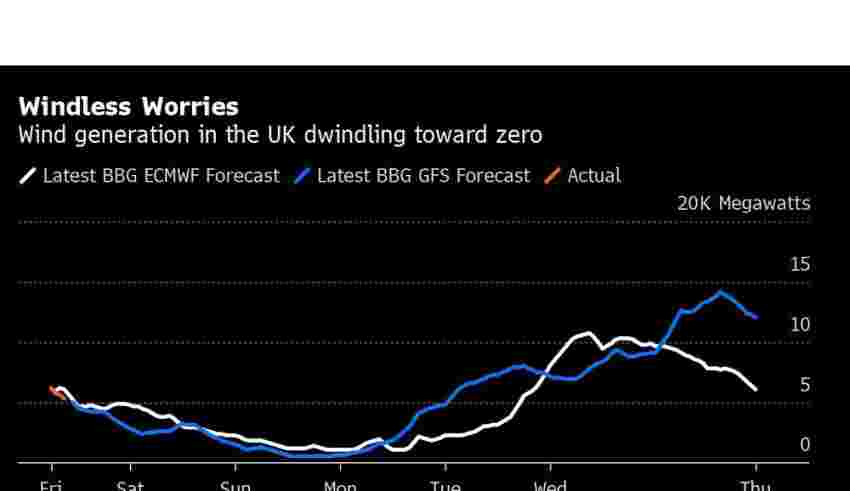 The winter chill is finally setting in across Europe.

With an arctic blast hitting, Stockholmers woke on Friday to a fresh dusting of snow and skaters came out in force to enjoy the giant ice rink in the city’s historic Kungstradgarden park. The cold snap gripping the continent will continue into next week — with forecasts for sub-zero temperatures in Germany and snow in parts of the UK.

While the conditions will help add to the festive spirit, they’ll start to put pressure on energy supplies that are crucial to Europe surviving the winter without blackouts.

A mild autumn limited gas usage and helped storage sites to fill up, easing worries about potential shortages with the loss of Russian flows. But the challenges are now starting. More heating demand and a dearth of supply from UK, German and Nordic wind parks will test grids just as French and Swedish nuclear fleets are struggling.

And although the government in Germany, Europe’s largest economy, expects to have enough energy over the colder months, the country’s network regulator BNetzA on Friday urged homes and businesses to reduce heating to conserve fuel.

“It is very likely that there will be an increase in heating demand to cope with the colder conditions that are likely to persist through most of the month,” said Alexandra Sherred, an associate meteorologist at The Weather Co.

A blocking high pressure dome over Greenland is causing low pressure waves to move eastward near and over the Nordics, Marex meteorologist Alexandre Fierro said. Though it will be warmer around the Mediterranean, northern Europe will feel the freeze through to next week.

The mercury will plunge as low as -23 degrees Celsius (-9 Fahrenheit) in the very north of Scandinavia on Monday, Sweden’s state forecaster said. Other forecasters see most chance of snow in the short-term in northern and eastern Scotland, and the UK’s Met Office issued a warning for snow and ice in southeast England and London from Sunday.

“Everything suggests that the cold weather will last for at least the next 10 days,” said Mattias Lind, a meteorologist at Sweden’s state forecaster. “There might be quite a bit of snow in the coming days.”

The worry is that the biting conditions are accompanying a worsening power crisis in Sweden, with an outage at the country’s biggest nuclear reactor raising the real risk of disconnections. That means the nation will have to rely on power imports from Norway, Germany and Poland to ensure there’s enough to go around.

In Germany, citizens were praised for saving gas when temperatures were still mild in November. And while heating demand is rising now with temperatures reaching around -7 degrees Celsius in places like Berlin and Hamburg, households will be tempted to turn up the thermostat.

“We must keep in mind that the winter can drag on,” Klaus Mueller, president of the German network regulator, said in an interview with public broadcaster ARD.

There are also other weather threats to Europe’s energy system. Wind output will reach a low over the weekend in the UK before increasing on Monday — something that caused short-term power prices to rally.

For some, the wintry weather is very welcome.

This weekend is important for winter resorts in Sweden’s western mountains as the season kicks off with special ski try-outs and other events to attract visitors after a subdued few years due to the Covid pandemic.

The Stoten i Salen resort — about 5 hours northwest of Stockholm — opened its first slopes on Thursday and has seen a boost in late bookings due to the cold.

“Of course the weather helps,” said Magnus Dovallius, head of marketing. “It’s also good for us that it’s snowing in the rest of Sweden. We’ve already had good snow earlier in December that have lasted. It makes people take out their boots and winter coats.”