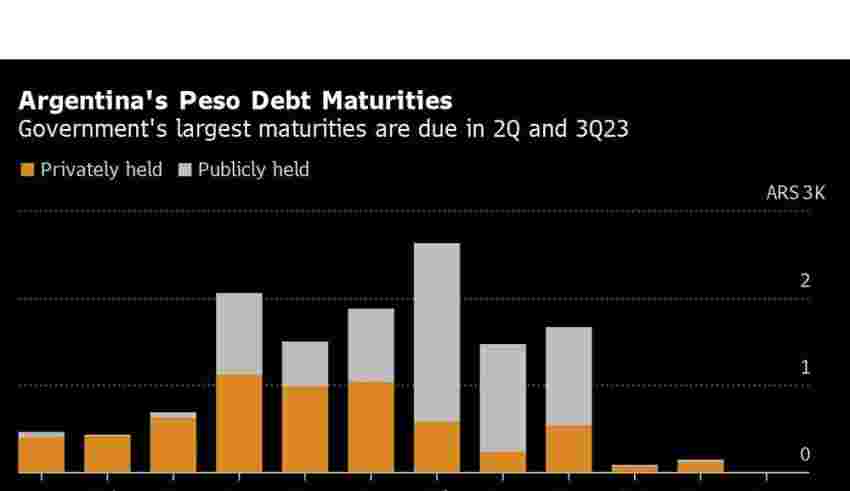 (Bloomberg) — Argentina’s international bonds leaped to their highest in more than a year after the government said it planned to repurchase about $1 billion of the debt, surprising investors in a country that is struggling to repay domestic securities.

The South American nation’s $16.1 billion in overseas bonds due 2030 rose as much as 3.2 cents to more than 36 cents on the dollar, the highest since October 2021, before paring gains. It is those bonds, plus ones maturing in 2029, that the government plans to buy back, Economy Minister Sergio Massa said Wednesday, without giving details. The central bank will lead the process.

“Where is the money coming from?” Portfolio Personal Inversiones analysts led by Joaquin Bagues wrote in a note. “Net reserves are hovering around US$6.08 billion, so this first phase of the program would consume 16.44% of this scarce stock.”

The buyback would mark the first major action by the government on the country’s global bonds since $65 billion of notes were restructured in 2020. Its bonds have been trading in distressed levels since then, but prices have almost doubled in recent weeks from an October low of 19 cents on the dollar.

“The decision would be justifiable if Argentina had excess reserves — but that’s not the case. International reserves currently stand at $42.9 billion and have long been running below the the IMF’s recommended level. Voluntarily disposing of $1 billion is a risky bet on sustainable improvement in commodity prices and international liquidity.”

Argentina is trying to comply with the government’s $44 billion agreement with the International Monetary Fund, build international reserves and battle annual inflation near 100% ahead of this year’s presidential elections.

“It’s hard to believe that the IMF has signed off on this, or maybe they haven’t and Argentina is going forward with it anyways,” said Edwin Gutierrez, head of emerging-market sovereign debt at Abrdn in London. “There’s no way Argentina will overshoot their reserve accumulation target in the short term.”

Massa added on Wednesday that an ongoing drought is impacting the government’s economic forecasts included in its 2023 budget. Without providing specifics, he said Argentina would need to import less energy than projected in the budget.

The country’s key export crop, soy, is facing the prospect of its worst harvest in 14 years as drought-stricken farmlands anticipate poor yields. That outcome would risk shaving 1.8 percentage points from gross domestic product, according to estimates last week from the Buenos Aires Grain Exchange.

Before Wednesday’s announcement, economists surveyed by Argentina’s central bank last month had projected economic growth would slow to less than 1% this year from over 5% in 2022 amid the drought and election uncertainty.

At the same time Argentina is seeking to buy back some of its foreign currency bonds, trouble is also brewing in the local debt market.

Local investors have been unwilling to refinance their holdings of peso denominated debt amid fears soaring inflation is making the country’s CPI-indexed peso debt unsustainable, possibly forcing the government to default later this year.

A peso debt auction on Wednesday will serve as a litmus test for local investors’ willingness to fund the government in 2023, indicating just how close a possible default may be.

The sale is the first tests of the new year for the government to raise participation among private investors in local debt auctions. The Treasury is seeking to refinance around 365 billion pesos ($2 billion) in local notes and bonds, with about 86% of the total maturities held by the private sector, according to Portfolio Personal Inversiones.

If Argentina doesn’t roll over the full amount, it will need to cover any shortfall through money printing, further fueling inflation and increasing pressure on the government to devalue its official exchange rate, according to Javier Casabal, a fixed income strategist at Adcap Asset Management in Buenos Aires. That in turn adds to pressure for a reprofiling of the debt later this year.

“If Argentina doesn’t manage to refinance its local debt, the market will start to get nervous, and we could see more pronounced redemptions from mutual funds,” Casabal said. “There are already redemptions, but for now, everything is still manageable.”

The sale will run from 10am until 3pm local time, with a second round auction on Jan 19.