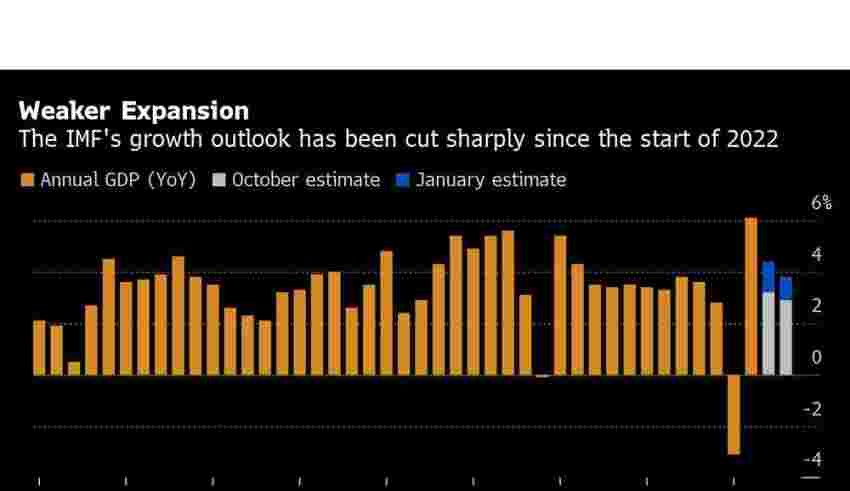 (Bloomberg) — Australia is set to raise interest rates as it closes in on the end of its tightening cycle, while nearby New Zealand just delivered a record hike and is poised to move higher, underscoring different central bank outlooks at year’s end.

All-but one economist sees the Reserve Bank of Australia hiking by a quarter-percentage point to 3.1% on Tuesday, with the sole exception forecasting a 15 basis-point move. Some economists expect the RBA to pause in 2023, while others see a couple more hikes, reflecting its aim to cool inflation without slowing the economy too much.

That contrasts with New Zealand, which has boosted rates by 4 percentage points and sees more to come, and the Federal Reserve which has hiked by 3.75 points since March and is also expected to go further. Both are willing to risk recession — New Zealand forecasts one — as they try to crush inflation.

The following charts look at what separates Australia and New Zealand’s outlooks, differences that point to some of the factors affecting the policy paths of other global central banks.

“The inflation problem in New Zealand appears to be more embedded. The cycle in the housing market has also been more extreme in New Zealand.”

New Zealand warned late last month when it delivered a 75 basis-point hike that inflation expectations were beginning to shift higher. Its central bank now sees the key rate climbing to 5.5% in 2023 from the current 4.25%.

Australia, by contrast, has seen medium-term inflation expectations remain anchored. While it’s partly achieved this through what would be its sharpest annual policy tightening since 1989, a quarter-point hike on Tuesday would still only bring its cumulative increases since May to 3 percentage points.

Another important point of difference is that Australia is not seeing the same wage pressures that New Zealand and the US are experiencing. New Zealand’s labor cost index has remained above 3% since the beginning of this year while the Australian measure only broke out of the 2% range last quarter.

The divide is even starker for average hourly earnings, according to economists at Australia & New Zealand Banking Group Ltd.

“In New Zealand, wage-price spiral dynamics are becoming increasingly robust and entrenched,” said Catherine Birch, a senior economist at ANZ. “In Australia, wages have not been a major driver of higher inflation so far.”

The RBA’s forecasts show inflation peaking at 8% this quarter and then beginning to slow over the ensuing two years before finally returning to the 2-3% target in 2025.

New Zealand’s is expected to peak at 7.5% this quarter and next and then fall faster, reflecting a sharper forecast tightening cycle.

“We want people to understand that, over time, inflation in Australia will average 2-point-something,” RBA Governor Philip Lowe says.

Lowe has emphasized the benefits of pandemic-era policy stimulus for Australia’s labor market. Unemployment has fallen to a 48-year low of 3.4% and the nation’s participation rate is hovering around a record.

New Zealand’s jobless rate is also very low at 3.3%, but is expected by the central bank to rise sharply to end 2023 at 4.8% amid a forecast recession.

Governor Adrian Orr has repeatedly highlighted that employment in New Zealand is above its maximum sustainable level and is helping to fuel inflation.

Another reason the RBA is willing to go slow is the country’s A$9.7 trillion ($6.6 trillion) property market. Australian households are among the world’s most indebted and vulnerable to sharp policy tightening.

While property prices have fallen rapidly since the start of this year, the decline has remained orderly and loan arrears are still low. Most economists predict a 15-20% peak-to-trough drop in home prices, an outcome the economy is likely to be able to weather.

RBA policy transmission is also more potent due to the prevalence of floating-rate mortgages, meaning that loan repayments rise a couple of months after a hike. In both New Zealand and the US, by comparison, a majority of home loans are on long-term fixed rates.

The RBA has recently expressed worries about the global outlook: the impact of rapid tightening on the US economy; Europe’s energy crisis triggered by Russia’s war on Ukraine; and a slowdown in Australia’s top trading partner, China, from its Covid policy and a housing downturn.

Lowe expects global weakness to reduce commodity prices, ease demand and help smooth some of the supply-chain bottlenecks. That will help bring inflation down and remove some of the need to move aggressively going forward.

—With assistance from Tomoko Sato.