Zach Shallcross got his heart broken by Rachel Rechhia on “The Bachelorette,” but now he will be the one handing out roses — and maybe a diamond ring — as the Bachelor!

Only “Extra’s” Jenn Lahmers was with him after his first-ever talk show interview, on “The Jennifer Hudson Show.”

Jenn asked if the 26-year-old from Southern California is “ready to date 30 women at the same time?”

Lahmers teased, “Do you have your lip balm ready, because you’re going to have to do a lot of camera kissing.”

He interjected, “And Listerine… and lots of mints.”

During the “After the Final Rose” special earlier this week, Zach got to meet five of the women he could be kissing. It was the fans, however, who got to vote on who should receive the First Impression Rose. They chose Brianna.

Shallcross shared his first impressions of the ladies, telling Jenn, “They all impressed me and did an incredible job, and it is going to be nice to see them on night one and already have that familiarity.”

As far as women making their limo entrance on the show, he said, “Gimmicks, I don’t know… I want to see you for you… so just be yourself. I know it is nerve-racking, but it is okay to be nervous and enjoy it. Have fun with it.” 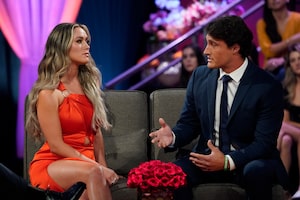 Zach also opened up about his time on “The Bachelorette,” explaining, “I really put my heart into it. Unfortunately, it just didn’t work out for us.”

How has that made him even more ready to find love? He said, “It is such a unique situation… It is all these incredible women that are going to be there, there’s cameras, there’s amazing dates, you’re traveling the world, just being comfortable with that. I’m still not 100 percent, but I’m getting there.”

So what are his dealbreakers when it comes to the women? Shallcross said, “Random drama over stuff… like, why cause a scene…? Another one is being rude to people around you, like a waiter. If they are rude for some reason that’s the biggest turn off for me.”

Zach’s season of “The Bachelor” premieres January 23 on ABC.

Do You Know Someone Who Has Cancer? Here’s How You Can Help.

Cancer is a 360-degree disease: It touches everything and everyone around the diagnosis. I…