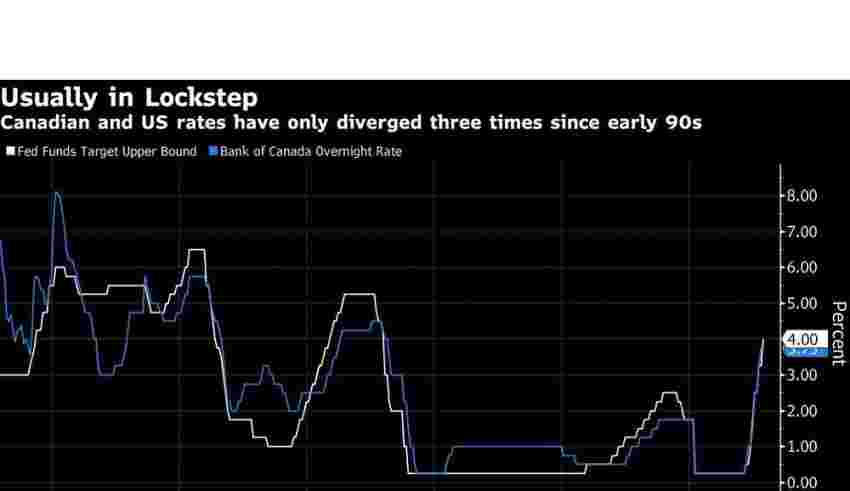 (Bloomberg) — The Bank of Canada has leeway to end its interest-rate hiking cycle in coming months even if the Federal Reserve keeps pushing borrowing costs higher next year, according to economists.

Governor Tiff Macklem and his officials can comfortably leave their benchmark rate as much as 100 basis points lower than that of their southern counterparts, a Bloomberg survey shows.

More than half of the 16 respondents say the Bank of Canada won’t end up signaling a pause. But Macklem is nonetheless expected to stop hiking after this month’s meeting or in January, leaving borrowing costs at 4.25%.

In the US, short-term money markets are betting that Chairman Jerome Powell will raise the Fed funds rate to between 4.75% and 5%.

That gap in expectations suggests Macklem has some flexibility as he searches for an endpoint to Canada’s aggressive rate hike cycle, just as momentum in the domestic economy starts fading.

“The only reason that the Bank of Canada would be worried about diverging from the Fed would be the currency reaction,” Royce Mendes, head of macro strategy at Desjardins Capital Markets, said by email. “Given that there is already a material divergence priced into markets, the exchange rate should already have taken that into account.”

Consensus in the Bloomberg survey is split on whether the Bank of Canada will hike rates by 25 or 50 basis points at its meeting next Wednesday. Jobs data due Friday will be a key input into the decision.

Macklem and his officials have already raised the overnight rate to 3.75% from the emergency pandemic low of 0.25% that held until March. The Bank of Canada surprised markets and most economists at its last meeting by opting for a half-percentage-point hike, down from a 75-basis-point increase in September and a full-percentage-point jolt in July.

The Bloomberg survey took place between Nov. 25 and 30.