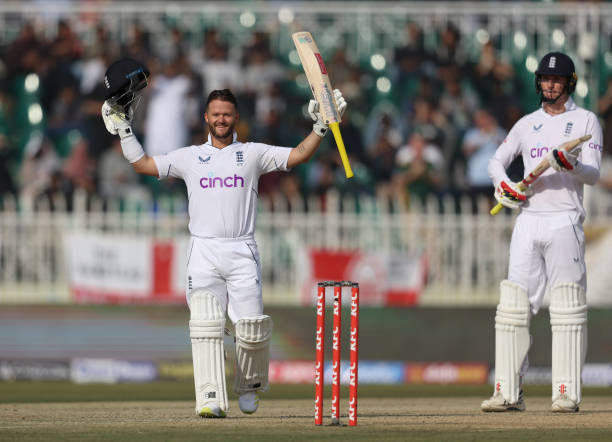 England took Bazball on tour as they became the first side to score over 500 runs on the first day of a Test. On an incredible opening day, England closed on a remarkable 506-4 in 75 overs of dazzling strokeplay, with four batters making centuries, including maiden Test tons for Ben Duckett and Harry Brook.

England’s first Test in Pakistan in seventeen years had been thrown into doubt yesterday, with the majority of the squad struck down with a virus and talks of a possible postponement. In the end, only Ben Foakes missed out from the initially selected XI, with Will Jacks coming in for his debut and Ollie Pope taking the gloves.

Crawley set the tone from the get-go, plundering 14 runs from the first over as England set off like a train. Pakistan’s bowlers struggled to adjust their lengths between the tall Crawley and the more diminutive Duckett, while the pitch offered scarce lateral movement. England’s century was reached in an incredible 83 balls, the first of several records to topple throughout a day which was quickly becoming a statistician’s heaven.

Shortly after lunch, Crawley reached his century, taking a mere 83 balls- the fastest ever from an England opener, after successfully reviewing an LBW decision when he was on 99. Crawley was at his eye-catching best, handsomely repaying the faith shown in him by Brendan McCullum and Ben Stokes. Duckett waited until the 35th over to bring up his century, continuing his winter of redemption with an innings of sublime confidence and skill. He perished shortly after, for 107, LBW after a review to debutant leg-spinner Zahid Mahmood after trying one reverse-sweep too many. They had added 233 for the first wicket; the highest opening stand for England in Tests since 273 between Marcus Trescothick and Andrew Strauss against South Africa in Durban, 2004.

Crawley was bowled by Haris Rauf in the next over for 122, offering Pakistan a brief glimmer of hope. Joe Root was typically busy until he became the only man to miss out on the run-fest, trapped LBW for 23 trying to sweep Mahmood. Ollie Pope and Harry Brook’s response was ruthless, embodying the positive approach that has become a staple of the McCullum era. They added 176 for the fourth wicket, with Pope playing some wonderfully wristy shots on the way to his third test match century. Brook mixed the artistic with the brutal, hitting poor off-spinner Saud Shakeel for six fours in an over. His century came from just 80 balls, as you had to constantly remind yourself England was facing a red ball, not a white one.

It was an extraordinary day of cricket and a far cry from England’s recent troubles in the sub-continent. England batted with calculated aggression, not reckless abandon, as they continue redefining Test cricket’s boundaries. Admittedly, the pitch resembled a bowler’s graveyard, and Pakistan’s bowling and fielding was especially ragged but take nothing away from England’s batters, who showed enormous confidence and conviction, making a mockery of their disjointed build up.

With Ben Stokes at the crease and Will Jacks and Liam Livingstone waiting in the wings, who knows what carnage tomorrow might bring?