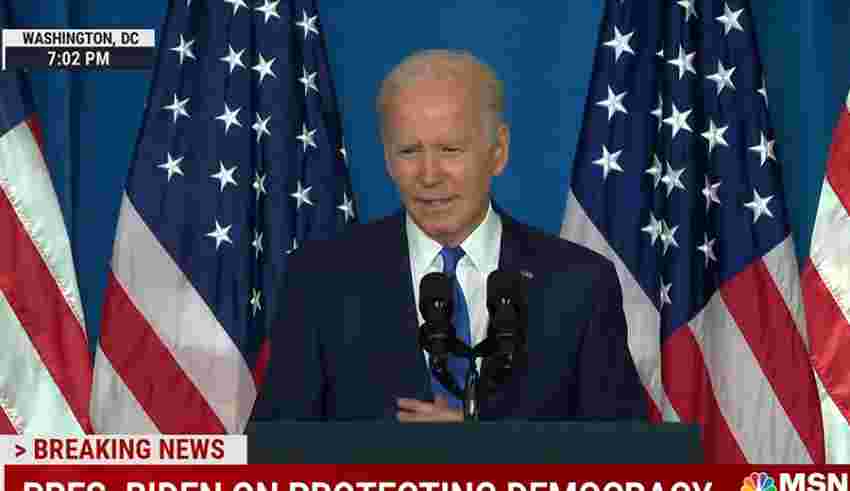 WASHINGTON, D.C. – President Joe Biden condemned former President Donald Trump and other Republicans during a televised speech on Wednesday evening, blaming them for political violence and for casting doubts on the outcome of the 2020 election, and claimed that the upcoming midterm elections are vital to the future of democracy in the United States.

While the majority of Americans cite the economy and crime as their major concerns heading into the midterms, President Biden – speaking from Union Station in Washington, D.C. – instead decried many members of the GOP for their support of “The Big Lie” perpetuated by Trump and his allies that he was robbed of his reelection bid in 2020 due to rampant voter fraud.

“As I stand here today, there are candidates running for every level of office in America – for governor, Congress, attorney general, secretary of state – who won’t commit to accepting the results of the elections that they’re running in,” Biden said. “This is the path to chaos in America. It’s unprecedented. It’s unlawful. And it’s un-American.”

Biden seemed especially upset over the attack that Paul Pelosi suffered last Friday at the hands of a home invader who police say intended to hold his wife, House Speaker Nancy Pelosi, hostage, and laid the blame for the incident at the feet of those who he claimed have been encouraging “political violence” in the country through support of Trump’s election claims.

“It’s a lie that fueled a dangerous rise in political violence and voter intimidation over the past two years,” Biden said. “This intimidation, this violence against Democrats, Republicans and nonpartisan officials just doing their jobs are the consequence of lies told for power and profit, lies of conspiracy and malice, lies repeated over and over to generate a cycle of anger, hate, vitriol and even violence. In this moment, we have to confront those lies with the truth. The very future of our nation depends on it.”

Biden never referenced Trump by name, but it was nonetheless crystal clear that he was talking about his predecessor, saying that he had “abused his power” and put himself before the Constitution in an effort to overturn the results of the 2020 election.

However, despite Biden’s arguments, recent studies indicate that voters on both sides of the political aisle – while both agreeing that the future of democracy is important – more highly value issues pertaining to inflation, the economy, abortion, and rampant nationwide crime as the main talking points they wish to see candidates address heading into next week’s midterm elections.

However, Biden seemed to dismiss those concerns, saying that while they were important, “there’s something else at stake: democracy itself. We can’t pretend it’s just going to solve itself.”