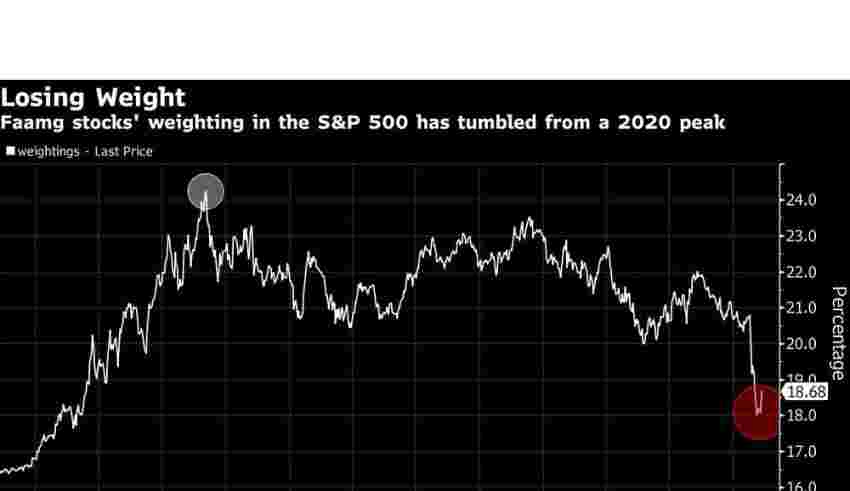 (Bloomberg) — The power the world’s technology giants wielded over the US stock market for years as it surged to record highs has been greatly diminished by the bust of 2022.

Even after last week’s rally, Apple Inc., Microsoft Corp., Amazon.com Inc., Alphabet Inc. and Meta Platforms Inc. have lost more than $3 trillion in market value this year as slowing revenue growth and rising interest rates battered valuations. That’s cut their weighting in the S&P 500 Index to about 19% from a record of more than 24% in September 2020.

The shift shows how much the contours of the stock market have shifted since the Federal Reserve made a sharp break from the easy money policies that set off a speculative frenzy. As the tech sector’s sway diminishes, more traditional sectors such as energy and banking are accounting for a greater share of the S&P 500, with companies like Exxon Mobil Corp. and Wells Fargo & Co. benefiting from high oil prices or rising interest rates.

The reversal of fortunes means that investors who piled into the S&P 500 back when tech stocks were surging are now far less exposed to the sector — and its potential rebound — than they were before. By the end of 2021, there was about $7 trillion invested in funds that are tied to the index.

“The average investor doesn’t have a clue about this stuff,” said Michael Mullaney, director of global market research at Boston Partners. “This is going to be something that plays out not just this year but into next year and longer.”

The technology sector got some relief from data on Thursday that showed inflation slowed more than expected in October, fueling optimism that the Fed could soon pause its most aggressive cycle of interest-rate hikes in decades. That sent the Nasdaq 100 Index up 9.4% on Thursday and Friday for its best two-day performance since 2008.

Even so, the Nasdaq is still down 28% this year, while the S&P 500 has lost 16%. And not everyone is convinced last week’s tech rebound will last.

Strategists at Ned Davis Research raised their exposure to value stocks on Thursday, saying an eventual Fed pivot could deliver more gains to sectors closely tied to the economy. Bank of America Corp. strategists said they expect the biggest tech companies to underperform over the next few years due to continuing cost pressures.

Apple, Microsoft, Alphabet, Amazon and Meta Platforms have been responsible for about half of the S&P 500 Index’s drop this year, according to data compiled by Bloomberg. If all the companies in the benchmark are weighted equally — instead of by market value, which is how the index is actually constructed — its drop would have been cut by six percentage points this year.

While investors are optimistic that interest rate increases will end next year, some big tech companies are bracing for the impact of an economic slowdown.

Amazon has warned of a weak holiday shopping season ahead. Last week, Facebook’s parent, Meta Platforms, said it would cut more than 11,000 jobs, the first major round of layoffs in the company’s history as it seeks to reduce costs amid a slowdown in digital advertising. Microsoft has also cut jobs, while Amazon, Alphabet and Apple have all slowed or paused hiring.

“Big technology stocks in particular have benefited from the almost endless liquidity and cheap money financed by the immense pace of growth,” said Dirk Friczewsky, market analyst for ActivTrades. “Now a different wind is blowing on the financial markets and investors don’t want to suddenly be without a chair when the music stops playing.”

—With assistance from Tom Contiliano.