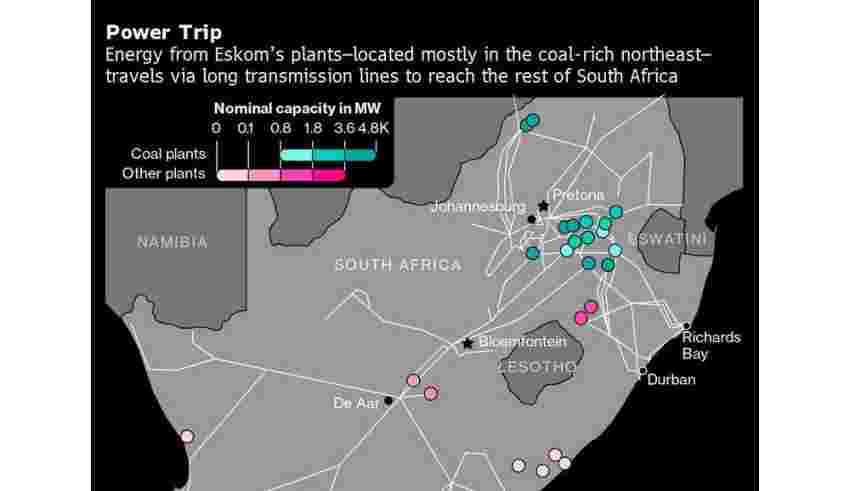 (Bloomberg) — South Africa needs to upgrade its coal-fired power plants rather than focus on renewable energy, according to a sanctioned Russian billionaire who made his fortune in part from generating electricity using the fuel.

“The priority for the country should be first to fix and modernize the existing fleet of power plants because that’s fast, that’s cheap and it allows at the same time to have a reasonable price of electricity,” Andrey Melnichenko said in an interview last week at a lodge in Irene, north of Johannesburg.

South Africa’s grid is concentrated in the northeast of the country, where its coal-fired electricity plants, which regularly break down, are located. Meanwhile, there’s little capacity in the provinces where solar and wind resources are readily available. The country uses the dirtiest fuel to generate 80% of its electricity.

Melnichenko, the founder of Suek JSC, said modernizing or repairing the state power utility’s 14 coal-fired plants would be cheaper and more effective, adding to a debate that’s raging in Africa’s most-developed nation. While President Cyril Ramaphosa has backed the drive for more solar and wind power, others in his government including Energy Minister Gwede Mantashe, a former coal-mine union leader, have decried the push to transition to green energy.

“There’s no electricity for six hours per day,” said Melnichenko, who is worth about $13 billion. “In which century are you living in?” he added in the interview, which was briefly interrupted by a power cut before the lodge’s generators started up.

Melnichenko is one of a number of affluent Russian business leaders who have been sanctioned by the European Union and the US in the wake of Russia’s invasion of Ukraine. While on his visit to South Africa, the tycoon — who also founded fertilizer company EuroChem Group AG — met government officials to discuss impediments to Russian exports of crop nutrients.

South Africa has had more than 200 days of power cuts this year, hindering economic growth and stoking criticism of the government.

Eskom Holdings SOC Ltd., South Africa’s state power utility, has said it needs 72 billion rand ($4.2 billion) over the next five years to expand the grid. Additional funding will be required to connect 53 gigawatts of clean energy capacity by 2032 as coal plants shut down.

—With assistance from Paul Burkhardt.