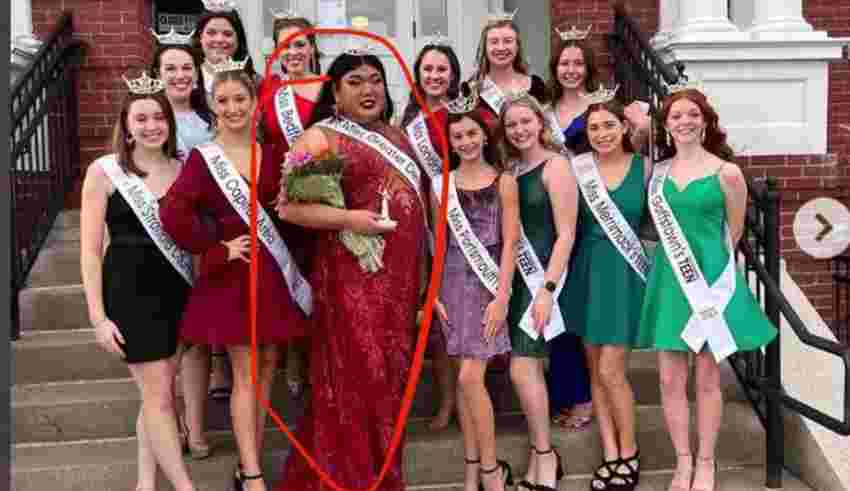 PORTSMOUTH, OH – Do the transgender women (bio males) that steal awards, titles, trophies, scholarships, and prizes from biological females feel the tiniest bit of empathy, sadness, or grief for the other contestants? Females that have sacrificed, worked hard, and put hours into training – then a male in a sparkly gown comes along and receives the undeserved accolade. Do trans care the slightest about bio women? It appears not. It appears these self-centered usurpers are just out for numero uno. It appears winning and the resulting validation from other gender-benders fuels their lack of otherness – no altruism under that wig. Entitlement reigns supreme.

“In a betrayal of good faith, good sportsmanship and good sense, the Miss Greater Derry Scholarship Program last week crowned 19-year-old Brian Nguyen its winner for 2023. It was an undeniable win for Nguyen and the small circle of dismayingly deluded individuals who think overweight men compare favorably to lithe young women in evening gowns,” according to a commentary in The Western Journal.

What is wrong with the judges? Fear of backlash by woke weirdos living in crazy cultureville. Soggy brains from too much coach roach milk. Or just gender-bending knuckleheads.

Robinhood stole from the rich and gave to the poor – but the man in green tights didn’t steal scholarships from deserving girls.

Take a gander at the group photo with the trans winner in the middle – no problem picking him out among the lovely ladies.

The responding tweets say it all. It’s disturbing. Folks, we are witnessing the erasure of females.

Rewind to 2021. A transgender woman was crowned Miss Nevada USA — for the first time in the pageant’s history, according to The New York Post.

“These 17 trans women have won national or international competitions or championships,” is an article in Outsports, a website that heralds bio males (trans) competing against bio females.

Females are being bullied in schools, universities, and society by wokeness and bio men believing or pretending they are women. Elizabeth Cady Stanton, Susan B. Anthony, and other women’s rights reformers would be appalled. Why is the women’s movement fighting against woke culture?

“The women of the suffragist movement, no longer accepting their fate as subservient, were loud and steadfast.”

The younger generation of women must resist woke pressure, peer pressure, and cancel culture pressure – or bio females are going to sitting in the back of the bus once again. Fairness is slowly swirling down the rabbit hole. Furthermore, the older generation of women must speak out against bio males in female pageants, sports, bathrooms, and locker-rooms. It’s not discrimination – it’s common sense.

Bio females are being forced to be subservient to bio males who’ve labeled themselves as trans. A skunk is a skunk – call a skunk by another name and it still stinks.