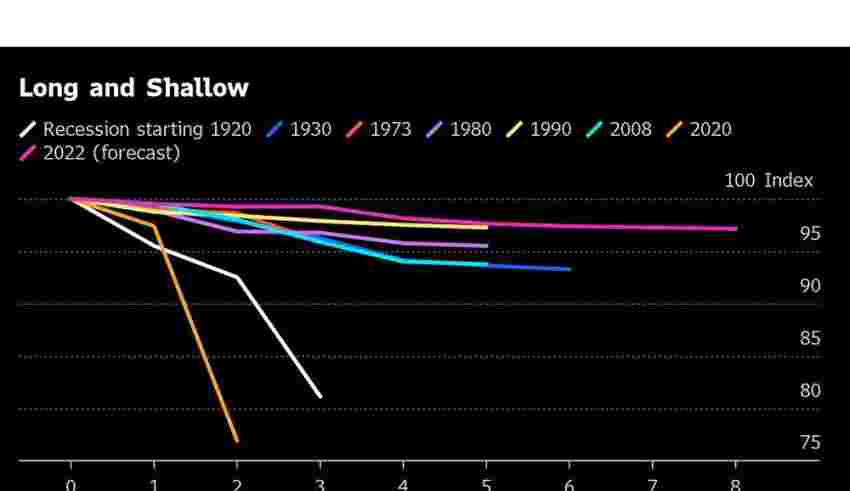 Britain’s darkening economic outlook is set leave Bank of England policy makers the most divided ever over how much to raise interest rates, with the prospect of the first-ever four-way split.

Investors are betting the nine-member Monetary Policy Committee led by Governor Andrew Bailey will boost the key lending rate a half point to 3.5%, the highest in 14 years.

However, deepening concern about a recession and historic cost-of-living squeeze have opened a debate on how forcefully the BOE should respond to inflation, which is lingering at a 41-year high. That will leave Governor Andrew Bailey struggling to find consensus for a decision scheduled for Dec. 15 and perhaps using his casting vote to tip the balance.

The meeting will be “hotly debated, and we shouldn’t be surprised if this ends up being a four-way split,” said George Buckley, European economist at Nomura.

The scale of dissent highlights the UK’s unusually weak and uncertain outlook, which is drawing comparisons with the 1970s when the country was characterized as the “sick man of Europe.” The range of views on the committee has never spanned more than a half percentage point, and there has never before been four different votes in a single meeting.

Rob Wood, UK economist at Bank of America, said the vote could be 2-5-2, with two members voting for no change, five for a half point and two for a three-quarter point increase. But he said “we see potential for a four-way split,” with one of the doves opting for a quarter-point increase.

That would mark the deepest division on the MPC since the BOE won authority to set interest rates in 1997. Before then, the Chancellor of the Exchequer at the Treasury set rates after hearing advice from the BOE.

Inflation at 11.1% is more than five times the BOE’s 2% target.  But the central bank is forecasting a demand-sapping recession that will squash price growth and drive up unemployment even if rates remain at their current level of 3%.

“The Bank of England’s December decision will probably be a closer call than the market is pricing. Data released since policymakers last met have held up, muddying the case for a downshift in the pace of tightening.”

The BOE, the Office for Budget Responsibility, the Organization for Economic Cooperation and Development, the CBI and the British Chambers of Commerce all expect a recession next year as high inflation hammers incomes and rising rates hit investment.

Markets and economists expect the BOE to raise rates to between 4% and 4.5%.

Complicating matters is the tight labor market, where participation has dropped so sharply that employers are having to pay higher wages for staff, and unions have been emboldened into calling strikes for higher pay. With the economy’s supply capacity weakened, experts fear inflation will prove harder to tame than elsewhere.

At the same time, central banks globally are showing signs of pivoting now that inflation appears to have peaked, with the US Federal Reserve recently signaling that it plans to slow the pace of tightening. The BOE is unlikely to talk about rate cuts for now before inflation falls.

“The experience of the last few months has been that inflation has become broad based, so they don’t want to ease prematurely just to have inflation come back again,” said Sonali Punhani, head of UK economics at Credit Suisse.

At the last two meetings, the BOE’s committee has been split three ways. Some members were concerned about persistent tightness in the UK labor market and signs of rising inflation expectations. Others feared the 18 month lag for policy to take effect will mean the impact of rate hikes will hit just as the economy needs support.

In November, the majority of members indicated that more tightening would be needed. Bank of America and Investec expect a half point rate rise this month. Nomura sees a three-quarter point hike, matching November’s, which was the biggest increase since 1989.

Contributing to the uncertainty at this meeting are key economic data points to be published before next week’s vote.

GDP figures on Monday may show the economy bounced back in October after a sharp decline in September, when many businesses closed for the death of Queen Elizabeth II.

The jobs report on Tuesday may show wages continue to grow faster than the BOE’s comfort level. On Wednesday, inflation data for November may show a dip from the previous month’s 11.1%.

“Not only are an array of decisions completely justifiable next week, but we have a number of key data points that should be highly influential,” said Buckley from Nomura.

Wood said surveys suggest the labor market “has turned,” with both vacancies and employment now falling, but “wage growth remains far too high.” Buckley pointed out that core inflation, which strips out volatile food and energy prices, remains a problem at 6.5%.

Further muddying the outlook is the autumn statement from the Treasury, which the Chancellor of the Exchequer published after the last BOE meeting.

Although he announced a £55 billion tightening of fiscal policy at the end of the five-year forecast, the immediate outlook is for further stimulus. That comes largely through an energy-support package that will cap the typical annual household bill at £2,500 a year until April, when it rises to £3,000.

Dave Ramsden, the BOE’s deputy governor for markets, has said it will have “very little effect” on the rate decision.

—With assistance from Harumi Ichikura, Liza Tetley and Andrew Atkinson.