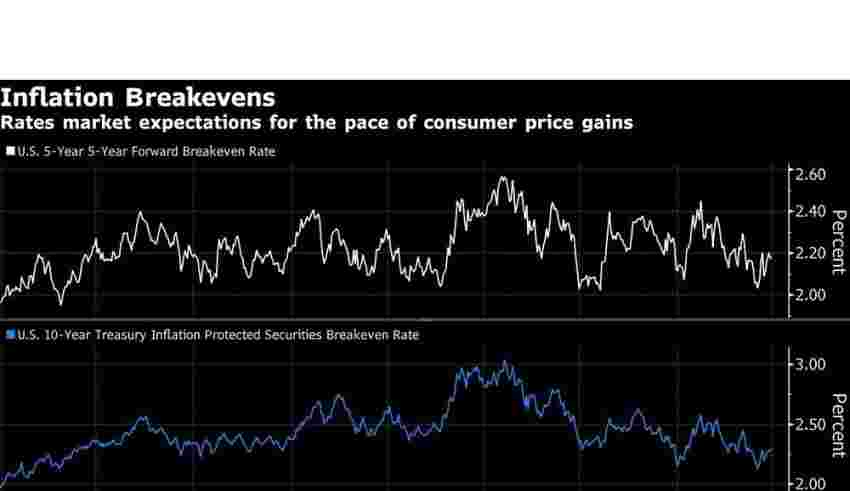 (Bloomberg) — Bond traders have pulled back, over the course of this year, on their expectation for where US inflation will be in a decade, suggesting growing confidence that 2022’s consumer-price blowout is under control.

With economic data showing signs that the series of supersized interest-rate increases from the Federal Reserve is beginning to have an effect on price pressures, market indicators are showing an annual pullback in traders’ inflation perceptions for the first time in at least two years.

The so-called breakeven rate on five-year five-year forwards — a widely watched proxy for the market outlook — has fallen 9 basis points to around 2.18% since last December. While that’s still above the 2% pace that the Fed tries to target for actual inflation, it’s the first annual decline in that measure since 2019. A similar gauge for Treasury Inflation Protected Securities, meanwhile, is down year-on-year for the first time since 2018.

Of course, for much of this year it did not look so benign. The five-year five-year measure, at one point, spiked to almost 2.7% amid fears that inflation would remain persistent as the energy shock from the Russia-Ukraine war turbocharged concern. That helped steel the Fed’s resolve to tighten policy, which has in turn lifted market interest rates across the spectrum — both nominal and real.

But with signs that the Fed’s tightening, among other factors, might ultimately push the US into recession, upward pressure on both rates and inflation expectations is now somewhat abating.

The following is a series of indicators on how the market views US inflation.