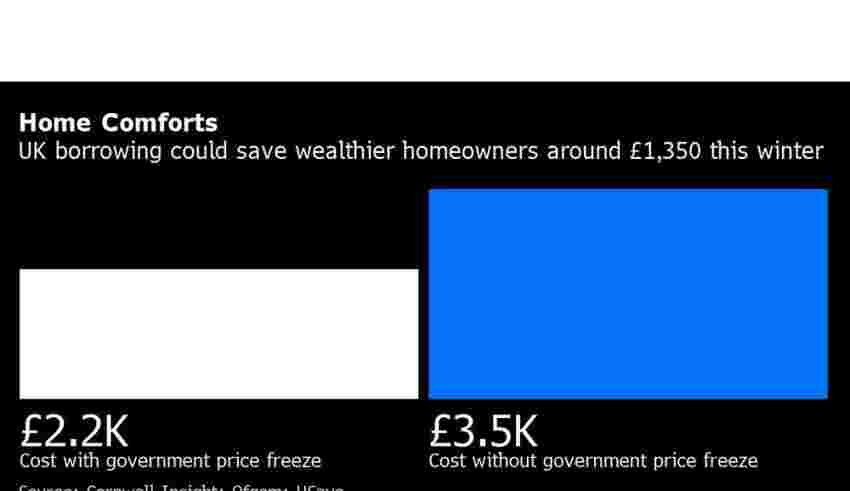 (Bloomberg) — Britons are paying more than £2 billion to help people heat the country’s biggest houses because of the government’s decision to cap energy bills for everyone rather than target the aid.

Subsidizing the gas and electricity for homes with at least five bedrooms will cost approximately £1.62 billion between October 2022 and March 2023, according to Bloomberg calculations. A £400 grant on top of that will add about another £460 million.

There are about 1.2 million properties with at least five bedrooms in Britain, based on estimates from property portal Zoopla.

While not all are owned by people who are well-off or have high incomes, the figures highlight how untargeted subsidies often benefit the wealthy to a greater degree. That’s a point made by the Institute of Fiscal Studies in its response to the aid plan, where it said that half of the giveaway will go to the top half of the income distribution.

Given that energy prices are forecast to remain elevated, the government may have to repeat the subsidies in some form next year, and there are calls for it to better target any future aid toward those on low incomes.

With inflation in double digits and many already struggling with their energy bills, so-called indoor warm spaces have sprung up across the country in libraries, community centers and churches to help.

Chancellor of the Exchequer Jeremy Hunt has said the Treasury is already looking at a replacement program that supports lower-income households from April next year. The Treasury declined to comment further, while the Business Department said: “We know that a broad range of households are struggling with the cost of living and that support needed to be provided in time for winter.”

The government’s package protects all consumers by capping how much they pay per unit of gas or electricity. Costing billions of pounds, it’s added to the strain on the public finances, and the government is examining spending cuts and tax rises in response. There’s concern that another round of austerity will disproportionately affect the most vulnerable, indirectly adding to the unequal impact of the aid.

“I agreed with the policy in terms of it helping people,” said Matt Cole, head of the Fuel Bank Foundation. “But I think where it went too far was it provided support to people who maybe didn’t need it.”

Under the subsidy, the electricity unit price is frozen at 34p per kilowatt-hour until April, and the gas unit price froze at 10.3p.

Without the subsidy, those prices would have been as high as 52p for electricity and 15p for gas between October and December, figures from energy regulator Ofgem show. For January-March 2023, the costs would be even higher. Analysis firm Cornwall Insight forecasts 67p and 17p.

Based on those numbers, a home with at least five bedrooms will have saved around £1,350 by April next year, when the government cap is lifted and the default supplier tariff looks set to return.

The government’s emergency measure ensured everyone was covered, at the expense of also paying for the energy bills of some wealthier people, said Peter Levell, associate director at the IFS.

“The government is going to have to take greater account of people’s energy needs,” he said. “The question is whether the government can, in the short period it’s given itself, find the right information to target in the right way.”

—With assistance from Todd Gillespie and Joe Mayes.