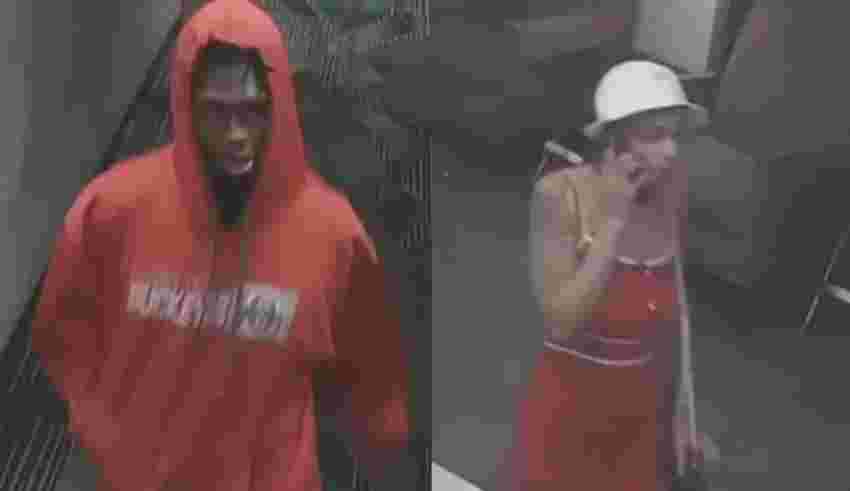 DANIA BEACH, FL – A sports fan in town for a Miami Dolphins game was pistol-whipped and robbed at a hotel in Dania Beach. Detectives with the Broward Sheriff’s Office Robbery Unit are releasing surveillance video of the robbers in hopes of identifying and locating them.

According to authorities, the robbery occurred at approximately 5:17 a.m., Monday, Oct. 24, near the 300 block of North Federal Highway. According to the victim, he was asleep in his hotel room when he heard a knock at the door. Thinking it was his hotel roommate, the victim opened the door and was instead greeted by a tall thin female wearing a white hat and red dress. A few seconds later, a male wearing a red hoodie, camouflage pants, and red shoes appeared armed with a gun.

The victim told detectives that once inside, the armed subject threatened to kill him, demanded money and jewelry, and then pistol-whipped him while the female subject rummaged through the room. The robbers left with cash, electronics and other miscellaneous items.

Surveillance video from the hotel shows the female robber entering the lobby, walking toward an exit door, and letting the male robber inside. The subjects appeared to have a conversation before entering the stairwell adjacent to the exit door. Both are seen walking toward the victim’s room a few minutes later. The female robber can be seen knocking on the door while the male robber paced the hallway. Following the robbery, the subjects leave the hotel in a newer model black Toyota Corolla.

Detectives are asking anyone with information on the subject’s identity to contact BSO Robbery Detective Keith Rosen at 954-321-4253 or submit a tip through the SaferWatch App. If you wish to remain anonymous, please contact Broward Crime Stoppers at 954-493-TIPS (8477), online at browardcrimestoppers.org, or dial **TIPS (8477) from any cellphone in the United States.