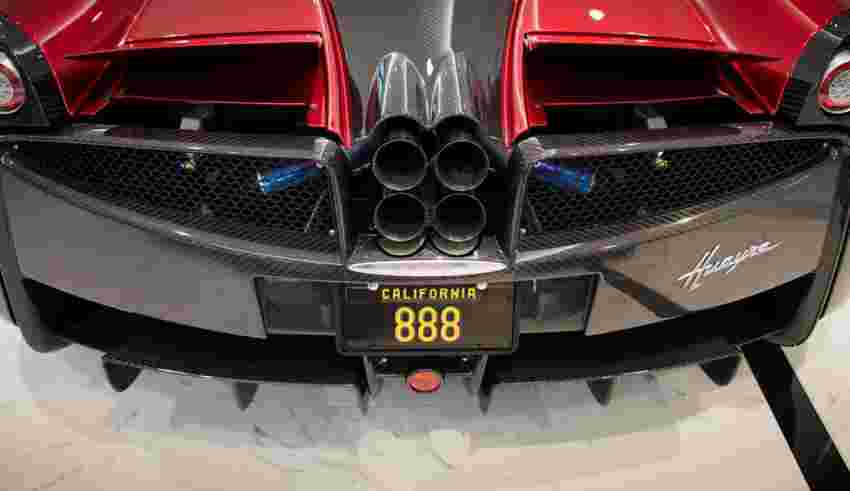 It’s been nearly eight years since Michael Modecki started developing PlateBroker.com. California had begun allowing current plate owners to release interest in their plates directly to new owners. With this new opportunity for an aftermarket, Modecki wondered what plates would surface.

The MM plate created international buzz last year and helped unearth plates like MD, BE, CASH, CINEMA, and COMPOSE. Modecki hoped to see the auspicious plate 888 surface, but never thought he’d see it in person, let alone be part of its history.

The number eight has long been associated with Chinese culture. In the Chinese language, the word for “eight” sounds very similar to the word that means “to make a fortune,” so 888 is a triple fortune. It has appeared in phone numbers and domain names, and chances are their owners paid a premium for them.

Just like domain names, the plate market is not like the real estate market where values can be determined by reviewing comparable sales. It’s more akin to the art market, where motivation is subjective and ultimately based upon the preference and taste of the purchaser. Certain pieces are better investments than others, considering the artist and historical significance of the work being purchased. In this scenario, the state is the artist, the license plate is the artwork and the car becomes the gallery. Artwork is significant no matter what gallery displays it, so, as cars change over time, the plate remains valuable.

One-of-one by design and function, license plates are held to the highest standards and are protected against counterfeiting and fraud by the governments that issue them. Plates have become generational assets and unconventional investments around the world.

When discussing the value of 888, Modecki remarked that it’s “ultimately priceless.” So, why sell it?

“Legacy,” Modecki said. “I get immense joy and satisfaction from this number plate, but in the end, I cannot split that evenly among my family. There is someone out there who understands the value and significance of the 888 plate. Perhaps they will keep it for generations. For me, I know the timing is right to let it find a new owner.”

The United States is late to high profile license plate sales, but it has an opportunity to make a grand entrance. The world record of $14.3 million for the plate “1” was set in Abu Dhabi in 2008, while a sale in Qatar made headlines in 2021 for the plate “123” for $12 million. Modecki has a target price in mind and invites offers from serious buyers.

“I see this plate not only breaking the world record, but establishing a very high watermark for future competition,” Modecki said. “In doing so, it will define the license plate market in the US, and set a new international standard.”

California regulations allow companies to acquire custom plates for their vehicles, so this is also an opportunity for a business to add a unique asset to their brand marketing arsenal.

“I’m excited to see how the market for 888 unfolds,” Modecki said. “I will enjoy my time as the custodian of this rare treasure as I wait to see who emerges as its next fortunate owner.”

Serious inquiries can be sent to 888@platebroker.com.