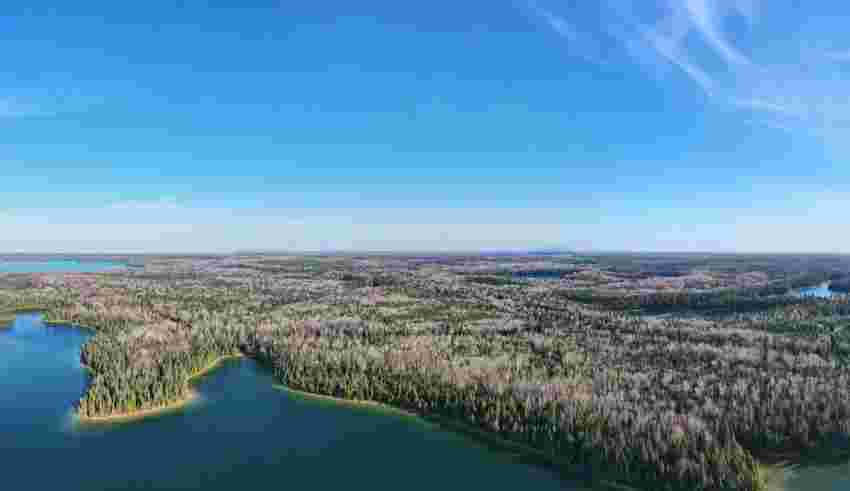 TORONTO — Banks know a growth market when they see it, and they’re increasingly seeing one in the buying, selling and generating of carbon offsets.

The concept of paying a few bucks when, say, buying a flight, to have the carbon emissions “cancelled out” by a project elsewhere is decades old, but with corporate net-zero promises piling up and the urgent need for action being emphasized at the latest UN climate conference that runs this week, offsets are being thrown into the global spotlight.

Since many companies can’t cut emissions entirely, or the technology to do so isn’t quite there, they’ll be relying on offsets to deliver on their net-zero promise.And while there’s still tremendous skepticism about their effectiveness, banks are positioning themselves as ready brokers.

“In terms of what’s happened in the last 12 to 18 months, I think, really is this mainstreaming of carbon markets,” said Andrew Hall, managing director of TD’s new carbon markets advisory unit.

“We’ve seen it grow very, very quickly, and I expect that trend to continue.”

Meanwhile, the Canadian Imperial Bank of Commerce has been working to build the foundations for a global carbon credit transaction network called Carbonplace as part of a group of international banks and Royal Bank of Canada, which first launched an environmental commodities trading desk back in 2008, said voluntary offsets make up an increasingly large percentage of total trades and strong growth is expected.

The global voluntary offsets market, which covers a wide range of projects from cleaner burning cookstoves to peatland preservation, is still relatively small at around $1 billion last year. (That compares with the more established, and regulated, compliance carbon market in places like Europe that runs in the hundreds of billions of dollars.)

It’s expected, however, to grow to upwards of $50 billion by 2030, consultancy firm McKinsey & Co. estimates, while former Bank of Canada governor Mark Carney was only last year talking about the market possibly topping $100 billion by decade’s end.

Carney made the comments as one of the key people behind the Taskforce on Scaling Voluntary Carbon Markets, established in late 2020 to expand options in anticipation of the need ahead.

The taskforce, however, became a focal point for long-standing criticism on offsets generally, with critics arguing both that the concept itself is a dangerous distraction from companies actually reducing their emissions, and that the way offset projects are actually assessed and carbon credits tallied is highly flawed.

In March, the group announced a name change it’s now the Integrity Council for the Voluntary Carbon Market, with a focus on improving the credibility of the market more than its growth.

The group is not to be confused with the Voluntary Carbon Markets Integrity Initiative, also working to bring legitimacy to an unregulated and fragmented space.

RBC said the new efforts at standardization will be key to enhancing credibility and driving growth, while TD said it also still has faith in the four main verification standards that have been around for years, as well as its own ability to assess projects.

“We’re going to be very intentional on who we transact with, and we’re going to be dedicated to making sure we’re using different registries that are best in class,” said Amy West, TD’s global head of ESG solutions.

She said the bank will also be focusing on areas it knows well, with North America its key focus, as it looks to instill trust and transparency in the market.

But even projects closer to home have come under scrutiny. A British Columbia auditor-general report was highly critical of NCC’s Darkwoods project, finding that the forest would have been protected without the carbon offset payments. A key component of offsets is that only though money paid in would the carbon be trapped.

It’s a widespread problem in forestry-based projects, trying to guess what might have otherwise been cut. There’s also the problem of trying to figure out once a forest is protected, whether a logging company just cut the same amount of wood elsewhere.

The NCC said it accounts for these problems by setting aside portions of the credit, along with setting aside more for the potential that the forest burns, which is an increasing problem as climate change effects accelerate.

But while debates around the process and accounting continue, some dismiss the concept entirely.

Offsets not only have too doubtful a track record on how well they perform and reliably trap the emissions promised, but they are a distraction from the pressing needs to reduce direct emissions, said Ervine.

“Banks getting into offsetting are providing their clients with a tool that they will then obviously profit from, but I don’t think it’s about dealing with climate change.”

Greenpeace has also been vocally opposed to offsets, with Shane Moffatt, Canadian head of nature and food, calling them “total greenwash and a barrier to actual emissions reductions.”

He did, however, give a slight window of allowance where good-faith actors are making genuine emissions reduction efforts and have tricky short-term issues, or where reductions are very hard, but overall believes they’ll be overused as a panacea.

The expectation that offsets not be used in place of emissions reductions is becoming more common as part of improving standards around the concept. The Net Zero Banking Alliance for one, of which Canada’s big banks are members, says offsets should only be used on residual emissions when there are limited technologically or financially viable alternatives.

Canadian banks have also emphasized that offsets are an add-on as part of the wider push for neutral emissions.

Dominque Barker, head of sustainability advisory at CIBC Capital Markets, said that there’s still much to improve in carbon markets, including fragmentation and a lack of transparency, but that offsets are an important part of the necessary global push to emission reductions, especially in pushing more funding and assistance to projects in the Global South, a key area of discussions of the climate talks in Sharm El Sheikh, Egypt.

“We need this. It’s not a choice, we need to move ahead, and the role of banks in this is absolutely critical.”

This report by The Canadian Press was first published Nov. 6, 2022.