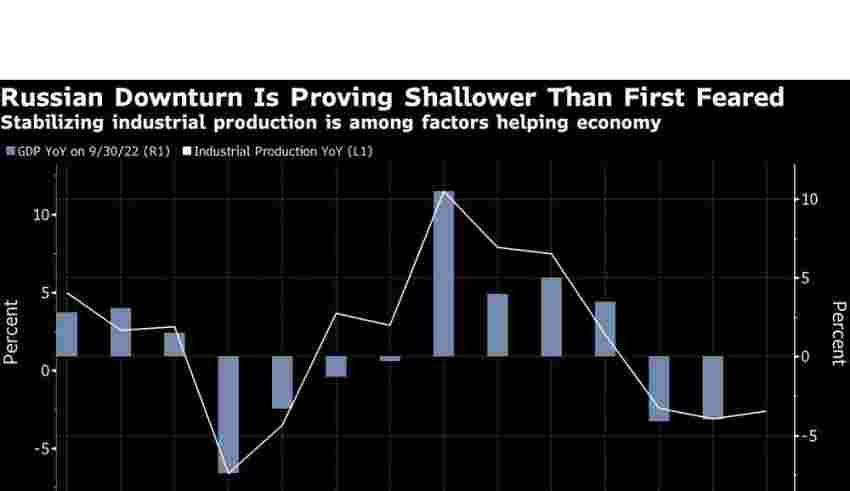 (Bloomberg) — Russia’s car market is eking out growth again, in a sign of what may lie ahead for an economy retooling under the pressure of international sanctions over the war in Ukraine.

Perhaps no industry in Russia suffered a bigger fallout from President Vladimir Putin’s invasion of Ukraine in late February, with output of light vehicles collapsing by nearly 97% three months later and car sales down more than 80% when the crisis peaked in May and June.

But the story didn’t end with the exodus of dozens of foreign companies and a slump in demand after multiple rounds of sanctions by the US and its allies. Fast forward to now, and car sales have almost doubled since May as a fragile turnaround has taken hold thanks to government spending and monetary stimulus, aided by a surge in imports of vehicles from China.

A breakdown of gross domestic product for the third quarter, due to be published on Wednesday, will likely show gains in sectors like manufacturing and mining that may have even put the economy on course for an expansion in sequential terms.

While a preliminary assessment from the Federal Statistics Service suggested GDP shrank an annual 4% last quarter, Bloomberg Economics estimates output actually grew 1% from the prior three months if seasonal factors are taken into account.

“The automotive industry has seemingly become a leading indicator for the Russian economy, as it reacted most quickly to the changed economic conditions,” said Olga Belenkaya, economist at Finam. Still, “there is no certainty that a bottom in the economy has already been reached — perhaps it will happen next year.”

The car market in Russia, which once rivaled Europe’s biggest economies by sales, has survived but emerged shrunken and transformed. Sanctions by countries that accounted for about half of Russia’s foreign trade before the war have left manufacturers cut off from some technologies and struggling to cope with a disruption of supply chains.

The isolation has been one of the forces warping Russia’s wartime economy and driving it toward what its central bank called “reverse industrialization.” Although the downturn so far has been shallower than first anticipated, Bloomberg Economics forecasts GDP will contract 3% next year as oil output and exports come under pressure.

“Even if Russia got a bit of a relief last quarter, it’ll likely slip back into contraction in the fourth quarter. Crude oil sanctions will hit energy export in the next two quarters. Beyond that, the recovery will be slow.”

The travails of the car industry reveal some of the ways in which Russia is adapting.

In a market where the likes of Toyota Motor Corp. once vied for dominance with Russia’s AvtoVAZ, only 14 of 60 brands remain active, according to the Russian Auto Dealers Association. Three of them are Russian and the rest are Chinese.

Chinese vehicles now make up over 30% of market sales, more than triple their share at the start of the year, with the auto dealers group expecting it to reach about 40% in 2023. Should domestic production stagnate, sales by Chinese carmakers could eventually account for 70% of the total, according to the association.

A factory in the Russian exclave of Kaliningrad that BMW AG operated with local partner Avtotor for more than 20 years has already started test production of Chinese brands and Nissan Motor Co.’s former plant in St. Petersburg may soon follow.

AvtoVaz, the maker of Lada vehicles that date back to the Soviet era, is also pouncing on the opportunity to gobble up market share.

Following its split with Renault SA in May, AvtoVAZ initially had to produce cars without basic safety features like anti-lock braking systems because of a dearth of parts. It has now sourced supplies and started assembling cars with components such as air bags and expects to add ABS in the year ahead, the company’s chief, Maxim Sokolov, told the Russian edition of Forbes magazine.

AvtoVAZ’s sales in November are already comparable with its pre-war volumes and it’s hiring workers in anticipation that output in 2023 could exceed last year’s total.

Gray market sales, also known as parallel imports, are additionally helping fill the void, according to Andrei Olkhovsky, chief of Russian car dealer chain Avtodom. A range of foreign models, from Audis to Volvos, is available for individual delivery orders, he said.

Since motor vehicles are generally not subject to sanctions, the recovery in the car market has so far been easier to sustain, even as it’s left Russia far more dependent on Chinese products.

Still, a full turnaround to pre-war levels will take years. “It may happen no earlier than in 2025,” said Azat Timerkhanov of consultant Avtostat.