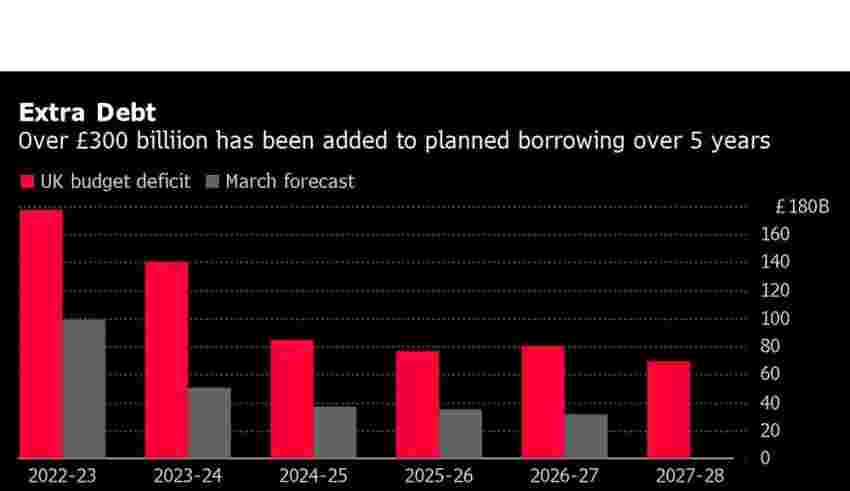 (Bloomberg) — Bank of Japan Governor Haruhiko Kuroda shocked markets earlier this week by doubling a cap on 10-year yields, in a move that helps pave the way for possible monetary policy normalization under a new governor.

The change, which blindsided all 47 economists surveyed by Bloomberg ahead of the decision, has the potential upend global markets as the cap has helped keep borrowing costs low worldwide. Later in the week, Japan’s key inflation gauge accelerated to the fastest pace since 1981, continuing to fuel speculation the BOJ will surprise markets again.

In the US, the Federal Reserve’s preferred inflation gauge continued to retreat, but wages are still rising much too fast for policymakers’ liking. Real consumer spending flat-lined, but officials will want to see more than a month of data to indicate demand is substantially cooling.

Kuroda’s decision to widen the trading band on 10-year bond yields triggered a jump in the yen and roiled global markets. The move shook markets — boosting the yen and bond yields, while sending stocks lower. The implications go far beyond Japan. With the BOJ — the last advanced economy holdout in a global monetary tightening shift — now letting the benchmark yield trade higher than before, the shock will echo across global financial markets.

China’s broad budget deficit hit a record so far this year, showing how damaging the now abandoned Covid Zero policy and the ongoing housing slump have been to the economy and to the government’s finances. The augmented fiscal deficit was 7.75 trillion yuan ($1.1 trillion) in January to November, according to Bloomberg calculations based on data from the Ministry of Finance.

Economic activity continued to fall in December for China’s small firms, with the business outlook weakening further as Covid cases surge amid reopening, according to Standard Chartered Plc. A gauge of business conditions at small and medium enterprises was in contractionary territory for a third straight month in December.

US inflation continued to ease into the end of 2022 and expectations of future increases dropped, reinforcing hopes that the worst bout of price pressures in a generation has finally passed. However, wages are still climbing much too fast as the job market remains tight.

US sales of previously owned homes fell for a 10th-straight month in November, extending a record decline as high mortgage rates continue to stifle affordability. Contract signings to buy single-family houses slumped to a 12-year low, while sales of condominiums also dropped.

UK household incomes fell for a fourth straight quarter, leaving Britons on course for the worst period for living standards in memory as officials estimated the economy was weaker than previously thought. Adjusted for inflation, disposable income per person declined 0.5% in the third quarter, while gross domestic product fell 0.3%.

UK government borrowing surged in November as the public finances came under mounting pressure from rising debt-interest payments and the huge cost of subsidizing energy bills for consumers and businesses. The budget deficit stood at £22 billion ($26.8 billion) –- the highest monthly total in records stretching back to 1993 and almost triple the £8.1 billion reading a year ago.

Vietnam is on track this year to bump Britain from its long-time place among the US’s top seven goods trading partners, which would be the first time the UK hasn’t been in that group in records going back at least to 2004. The UK’s share of the US merchandise trade slid to 2.6% through the first 10 months of this year while Vietnam’s rose to 2.7%, according to US Census Bureau data.

After some of the world’s most aggressive interest-rate hikes, Brazil’s inflation has plunged by half in the past six months. That sounds like mission accomplished — except the central bank doesn’t see it that way. While the bank’s benchmark now offers an inflation-adjusted return of almost 8% — a global high among major economies – traders reckon its next move is more likely to be another bout of monetary tightening because of fiscal policy.

Policymakers in Egypt, Morocco and Indonesia raised interest rates this week while those in Hungary, Paraguay and Czech Republic stayed on hold.