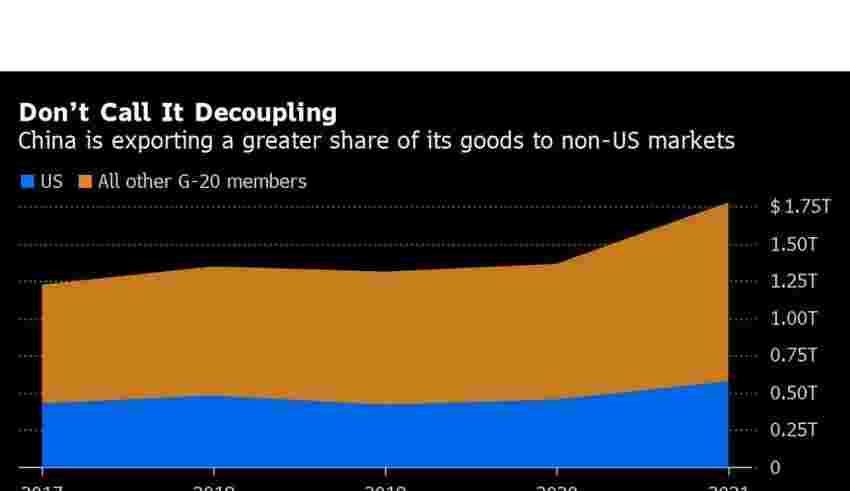 (Bloomberg) — Global central banks are pausing or nearing the end of their interest-rate hiking cycles as inflation shows signs of slowing and recession concerns mount.

Policymakers in Canada and Kazakhstan signaled they may soon hold steady, while central bankers in Brazil and Poland left their key rates unchanged for a third-straight meeting. Next week, the Federal Reserve is expected to step down its pace of rate increases but will likely determine it’s too soon to discuss a pause.

A US-China trade war, a global pandemic, Brexit and Russia’s war in Ukraine have rattled the once-entrenched ways that the world’s largest economies trade with each other. The shifting contours of the global trading system mark a kind of “reglobalization” where multinational companies are adapting their trade networks to accommodate the new economic and geopolitical challenges.

Australia’s central bank raised its key interest rate to a 10-year high and said it expects to tighten policy further as it seeks to cool the hottest inflation in three decades. Canada and Kazakhstan both raised rates but signaled a pause may be coming, while Brazil and Poland held steady.

A backlog of oil tankers at the Turkish straits continues to build up as negotiations failed to produce a solution to an insurance glitch caused by sanctions on Russian crude. Twenty-six tankers holding more than 23 million barrels of oil from Kazakhstan were unable to pass the Bosphorus and Dardanelles straits as of Wednesday, shipping data compiled by Bloomberg showed.

China’s exports and imports both contracted at steeper paces in November as external demand continued to weaken and a worsening Covid outbreak disrupted production and cut demand at home. Exports in dollar terms fell almost 9% in November from a year earlier, the biggest slide since February 2020.

Japan’s economy took a smaller hit than first thought during a summer marked by a renewed Covid surge and a plunge in the yen, with a return to growth expected this quarter. Still, consumption was weaker than first thought, raising concerns about the economy’s resilience.

German factory orders rose in October, a sign of hope for manufacturers in Europe’s largest economy as they struggle with inflation and elevated energy costs due to Russia’s war in Ukraine.

Hungarian inflation accelerated toward one of the European Union’s highest levels as a deepening rift between Prime Minister Viktor Orban and the central bank raised questions about economic policy. Consumer prices rose 22.5% in November from a year ago.

Producer prices rose in November by more than forecast, driven by services and underscoring the stickiness of inflationary pressures that supports Fed interest-rate increases into 2023. The producer price index for final demand climbed 0.3% for a third month and was up 7.4% from a year earlier. The monthly gains for October and September were revised higher.

Recurring applications for US unemployment benefits rose to the highest since early February, suggesting that Americans who are losing their job are having more trouble finding a new one as the labor market shows tentative signs of cooling. Continuing claims have now strung together the three largest increases since May 2020.

South African consumer confidence recovered to its strongest level in two years in the fourth quarter as households anticipated better employment prospects and an improvement in their finances.

Turkish inflation slowed for the first time in over a year and a half, though measures to revive the economy ahead of elections in 2023 may keep it elevated for some time. Consumer prices rose an annual 84.4% in November, down from 85.5% the previous month.

At least 15 of the 72 emerging markets in a Bloomberg index now have dollar debt trading at distressed levels, after Russia’s invasion of Ukraine fueled global energy and food price inflation. Although there has been a small rally in the bond market in recent weeks, distressed debt in emerging markets remains a serious weak spot in a global economy preparing for recession.