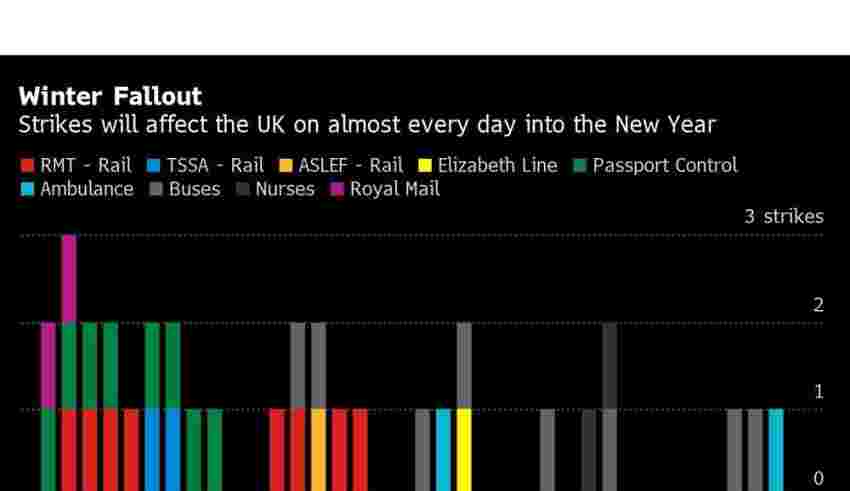 (Bloomberg) — An underlying gauge of euro-zone inflation flared to a record last month, indicating persistent price pressures that will likely extend the European Central Bank’s most-aggressive bout of interest-rate hikes in its history.

Stripping out food and energy prices, so-called core inflation rose to an all-time high of 5.2% in December. Slower growth in energy costs was the only reason for the moderation in the overall annual figure, which fell below 10% for the first time in four months.

In the US, robust hiring and a cooling in wage growth raised hopes that the Federal Reserve can tame inflation without triggering a surge in unemployment. The jobless rate fell last month to match a five-decade low.

Euro-area inflation returned to single digits for the first time since August, fueling hopes that the bloc’s worst-ever spike in consumer prices has peaked. December’s reading came in at 9.2%. Highlighting how inflation continues to menace Europe’s economy, however, a measure of underlying price pressures that strips out energy and food edged up to a record 5.2%.

German factory orders fell in November, a reminder that the country’s manufacturers are still struggling — even as the economic backdrop improves. Demand declined 5.3% from the previous month, driven by foreign orders, especially from the euro zone, and the drop was exacerbated by large-scale orders, the German statistics office said.

British rail workers walked off the job for much of this week, paralyzing transport and adding to the troubles piling up for Prime Minister Rishi Sunak’s government. The protests stem from growing anger over the tightest cost-of-living squeeze in memory. Inflation reached a four-decade high last year, and wages aren’t keeping pace, especially in public services.

The US labor market stayed strong in December and wage gains cooled, reducing risks of a near-term recession and giving the Fed room to slow interest-rate hikes.

Home-sales activity slowed to a crawl in Canada’s largest city in December, with just 3,117 homes trading hands to end a year that saw prices decline by a record amount. The benchmark price of a home in Toronto fell 8.9% from a year earlier, the biggest drop for a calendar year since the benchmark was first compiled in 2005.

China’s economy ended the year in a major slump as business and consumer spending plunged in December, with more disruption likely in the first few months of the year as Covid infections surge across the country. Official data showed the decline in manufacturing worsened last month, while activity in the services sector plunged the most since February 2020.

Japanese workers’ real wages fell by the most in eight years, suggesting that there’s still some way to go before the central bank can achieve its wage-growth accompanied price goal. The decline was led by a sharp drop in bonus payments, as the gain in basic salaries remained relatively stable.

Brazil’s corn exports to China are rising fast, taking a mounting toll on US shipments and depressing prices on the Chicago exchange. Twenty vessels have left Brazilian ports for China since the start of December, according to Anec, a group of grain exporters. It’s a remarkable amount for a nation that only began supplying China two months ago and threatens to displace US farmers from one of their key markets.

Colombia’s inflation accelerated more than expected last month to the fastest pace in over two decades, adding pressure on the central bank to continue its steepest-ever tightening cycle. The consumer price index rose 13.12% in December from a year prior to the highest since 1999.

Spot rates for shipping containers showed signs of stabilizing from a 10-month plunge heading into a seasonal lull in global trade around Chinese New Year.

Israel raised interest rates to their highest level since 2008 on Jan. 2, marking the earliest start for a new year in global rate actions since 2009. Sierra Leone followed with a 125-basis point hike, while the Bank of Poland left rates unchanged.