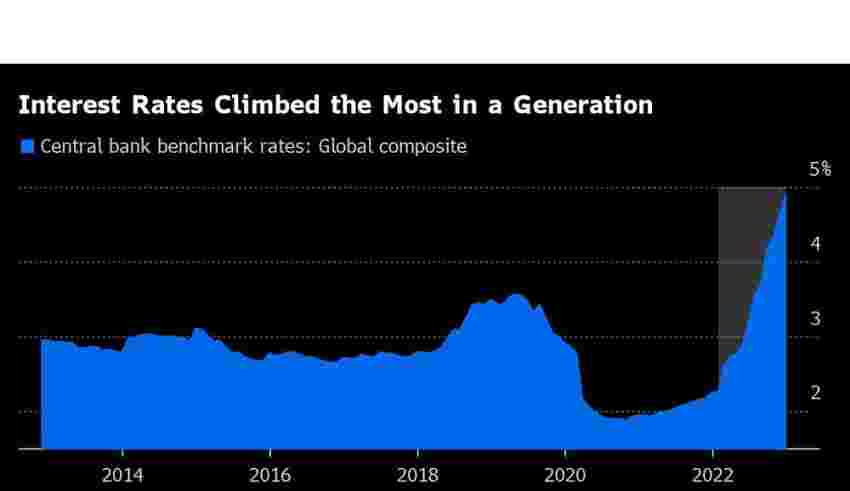 (Bloomberg) — Economic growth in China slowed significantly in 2022 from a year earlier as Covid-19 and the government’s response led to the second-weakest performance since the 1970s.

While economists expect activity to pick up steam this year, China is contending with near record-low consumer confidence, a property market in the doldrums and a shrinking population.

Meantime, at the World Economic Forum in Davos this week, central bankers warned against complacency about the fading of the global inflation shock, saying they’ll keep raising interest rates to ensure their job is done. In Japan, however, officials kept their main policy settings unchanged — a surprise to many that caused wide swings in financial markets.

In the UK, consumer prices eased for a second month in December, and a measure of US wholesale inflation fell by the most since the start of the pandemic. Price pressures in South Africa also eased at the end of the year to a seven-month low.

China’s economy proved more resilient than analysts forecast as a virus wave swept the nation, suggesting the worst of the slump may be over as a challenging recovery begins. While the 3% increase in gross domestic product last year was the second-slowest pace since the 1970s, fourth quarter and December data came in better than economists expected.

Bank of Japan Governor Haruhiko Kuroda looks set to end his tenure the same way he started it: sending yields careening in the world’s second-largest government bond market. Japan’s benchmark 10-year yield tumbled as much as 14 basis points Wednesday after the BOJ defied some expectations for another shift in policy. The size of the move matches the intraday drop on April 5, 2013, just after Kuroda initiated quantitative easing by pledging to double the monetary base.

India may have already surpassed China as the world’s most-populous nation in a milestone that adds urgency for Prime Minister Narendra Modi to create more jobs and ensure the country sustains its world-beating growth. China’s population started shrinking in 2022 for the first time in six decades, the latest milestone in a worsening demographic crisis for the world’s second-largest economy.

UK inflation dipped for a second month in December, boosting hopes that the worst cost-of-living crisis in a generation may be starting to ease. Consumer prices rose 10.5% from a year earlier, slower than November and down from a peak above 11% in October. Still, inflation is five times higher than the government’s 2% target.

Britain was in the grip of its worst industrial strife for more than 30 years even before the rail network and postal service ground to a halt over the festive period. Some 467,000 working days were lost to strikes in November, a 10-year high, after a wave of walkouts caused by the most severe cost-of-living crisis in a generation.

Investors’ sentiment for the German economy jumped to the highest level in almost a year, the latest evidence that confidence is building as a squeeze from soaring energy prices eases. Separately, Chancellor Olaf Scholz said he’s sure the country will avoid a recession this year, offering reassurance for Europe’s largest economy as it faces down Russia’s energy squeeze.

New US home construction declined for a fourth-straight month in December, wrapping up a disappointing year for an industry that saw annual housing starts fall for the first time since 2009. Separate data showed sales of previously owned US homes fell 17.8% last year, the biggest annual slide since 2008.

Retail sales fell last month by the most in a year and business equipment production slumped, raising concerns that the economy is losing momentum under the weight of tighter Federal Reserve policy.

South African inflation slowed to a seven-month low in December, though mounting price pressures including a sharp increase in electricity costs may force the central bank to keep interest rates higher for longer.

China’s reopening and the resilience of advanced economies provide hope for the world to weather 2023 even if some struggle to grow, according to a panel in Davos on the prospect of a recession. Against a backdrop of gloom within the business world and among forecasters as the World Economic Forum began, speakers at the Swiss resort congealed toward cautious optimism for the global outlook.

The slump in the world’s biggest asset class has spread from the housing market to commercial real estate, threatening to unleash waves of credit turmoil across the economy. Almost $175 billion of real estate credit is already distressed, according to data compiled by Bloomberg — about four times more than the next biggest industry.