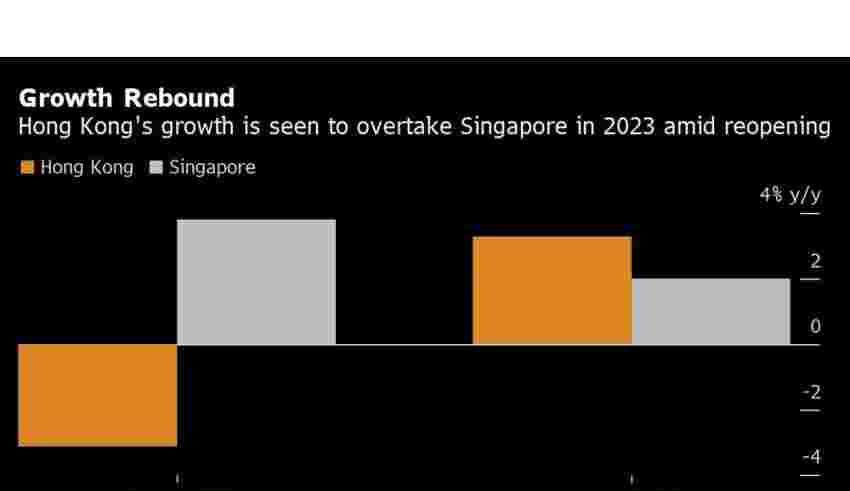 (Bloomberg) — Economists from Wall Street to the World Bank are increasingly convinced most parts of the world will be in a recession this year against a backdrop of sticky inflation and higher interest rates.

Global gross domestic product will probably increase 1.7% this year, about half the pace forecast in June, according to the Washington-based lender. That would be the third-worst performance in the last three decades or so, after the contractions of 2009 and 2020.

So far, the two-biggest economies in Europe have surprised to the upside, as consumers buoyed year-end GDP momentum in the UK and Germany. In the US, headline inflation fell to the slowest annual pace since October 2021.

The World Bank slashed its growth forecasts for most countries and regions, and warned that new adverse shocks could tip the global economy into a recession. The bank, which also cut its growth estimates for 2024, said persistent inflation and higher interest rates are among the key reasons.

After the shocks of 2022, a recession for large parts of the world this year seems a safe bet. Tougher to gauge, and more frightening, is the long-term impact of money itself being repriced and the assumptions that underlie more than 30 years of global economic history being overturned.

Central banks aren’t yet giving up their inflation fight, with the peak in interest rates still to come in most economies. But pauses will come at some point in 2023 — and perhaps even pivots. Policymakers in Romania, Serbia, South Korea and Peru raised rates this week.

Europe’s two-biggest economies may have succeeded in skirting a recession in the fourth quarter, defying downbeat expectations and offering hope of similar feats throughout the advanced world. Consumer-fueled momentum buoyed both Germany and the UK, according to official GDP estimates.

Emmanuel Macron’s government presented a plan to gradually raise France’s minimum retirement age to 64 by 2030 from 62, defying labor unions that have pledged to resist the change with strikes and protests. Making the French work longer is essential to boost relatively low employment rates among seniors and avoid persistent deficits in a system funded by worker contributions, the government has said.

Inflation continued to slow in December, adding to evidence price pressures have peaked and putting the Federal Reserve on track to again slow the pace of interest-rate hikes. The overall consumer price index fell 0.1% from the prior month, with cheaper energy costs fueling the first decline in 2 1/2 years.

Canada’s largest cities are getting bigger and more expensive, forcing hundreds of thousands of people to search for affordable housing elsewhere. Toronto, the country’s biggest urban center, saw nearly 100,000 people leave the area over a one-year period to July 1, while Montreal and Vancouver saw about 35,000 and 14,000 people exit, respectively.

Bank of Japan watchers see a policy shift coming much sooner than previously thought, following December’s surprise adjustments. While a survey of 43 economists showed all but one predicting the central bank to leave policy unchanged next week, some 38% of respondents now forecast moves either in April, when a new governor takes the helm, or in June. That’s a jump from 15% in last month’s poll.

After a near-certain contraction last year for the third time since 2019, Hong Kong’s economy is coming back stronger this year and may even grow faster than rival financial hub Singapore for the first time in more than a decade.

Chinese oil consumption is expected to hit a record this year as the world’s biggest importer leaves the straitjacket of Covid Zero behind, bolstering the global demand outlook and aiding prices. Oil’s bulls, of which there are many, have built a large part of their outlook on growth in Chinese demand, with Goldman Sachs Group Inc.’s Jeffrey Currie saying that crude is the “best reopening play.”

China’s trade deficit with Russia reached a record $38 billion last year as global energy prices surged following the outbreak of war in Ukraine. The world’s second-largest economy purchased $114.1 billion worth of goods from Russia in 2022, up 44% from a year earlier.