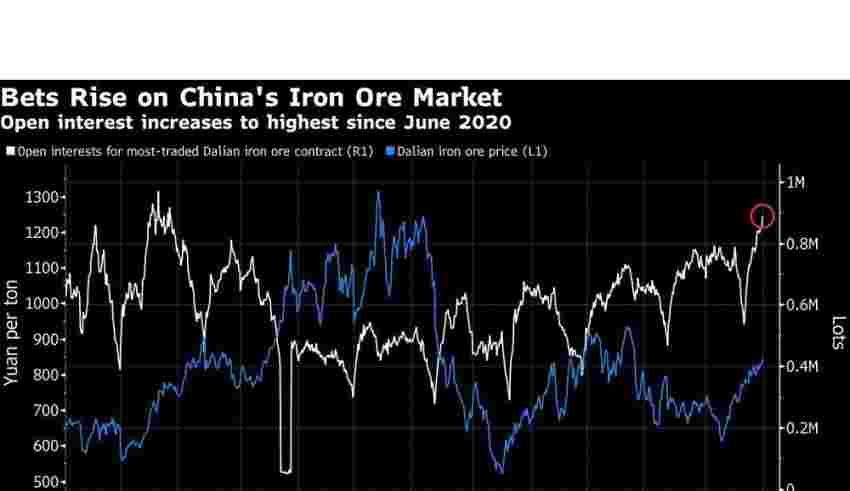 (Bloomberg) — China’s abandonment of Covid Zero is stirring hopes that a demand recovery in the world’s biggest commodities importer will boost prices once the country gets over the current virus wave.

Beijing’s retreat from virus controls since early last month has aided sentiment across raw materials. Traders are piling into iron ore futures, copper is rising despite the prospect of recessions in the US and Europe, and there’s talk of record annual soybean imports. China is also expected to buttress global oil demand this year.

There are still daunting risks, however, not least the severe Covid—19 wave that’s sweeping across Asia’s biggest economy. That’s a shaky starting point, but a stronger recovery is expected to eventually take hold. China’s GDP will rise 4.8% in 2023, compared with a meager 3% last year, according to a Bloomberg survey.

“It will definitely be a better year in 2023,” said Jia Zheng, a commodities trader at Shanghai Dongwu Jiuying Investment Management Co. “The first quarter might be the worst period as various economic policies are yet to take effect, but we will start to see improvement from the second quarter onwards.”

The shape of China’s recovery will help steer world commodities after they eked out a gain of around 7% last year. That came after a surge in prices in the wake of Russia’s invasion of Ukraine, followed by a gradual pullback on aggressive monetary tightening and slowdowns in major economies.

There are some encouraging signs that oil and energy consumption will recover quickly from the current virus wave. Traffic congestion across 15 major cities had rebounded nearly 60% by Dec. 28 from a week earlier, but was still 30% below January 2021 levels, an index compiled by BloombergNEF based on Baidu Inc. data showed.

Chinese oil consumption will be back at pre-virus growth levels by the third quarter, said Zhou Mi, an analyst at Chaos Research Institute in Shanghai, while demand for liquefied natural gas will rise about 6% this year, according to Wood Mackenzie Ltd. Overall energy consumption — including coal and gas as well as crude and renewable electricity — will be 2% higher this year than in 2022, oil major Sinopec’s research unit said.

“China is reopening much faster than we had expected, posing further upside risk to our oil demand figures,” Amrita Sen, director of research at Energy Aspects Ltd., said in a note last week. The industry consultant sees jet fuel demand — closely tied to tourism and travel — at 90% of pre-pandemic levels by the fourth quarter.

The recovery optimism was the major driver of a 17% jump last month in iron ore futures. In the domestic market, investors betting on a recovery in construction activity pushed open interest in contracts for the steel-making ingredient to the highest since June 2020 on the Dalian Commodity Exchange.

China’s property malaise remains a risk to demand for iron ore and other metals, however. Citigroup Inc. said in a note that it sees iron ore prices hitting $130 a ton in three months, compared with around $115 on Wednesday, but warned there wouldn’t be any meaningful turnaround in steel demand without a major easing of credit led by the central government.

The strict Covid-19 controls may have been dispensed with, but there’s also not many bright spots or growth engines, said Eric Liu, head of research and trading at ASK Resources Ltd. However, Tomas Gutierrez, an analyst at Kallanish Commodities, said improving credit support and the end of Covid Zero should set the stage for a steel recovery from the second quarter onwards.

In agricultural commodities, the hope is that Chinese spending on food and restaurants will come back quickly from the virus-induced slump. A strong pick-up could have a “momentous” impact on the country’s import flows, researcher Gro Intelligence said in a note.

Chinese soybean imports could jump to a record of more than 100 million tons this year, up from about 89 to 90 million tons in 2022, according to the most bullish forecasts in a Bloomberg survey. China buys almost two-thirds of the soybeans traded internationally.

There are plenty of counterpoints to the optimism, however. Activity is starting from a low base and while this Covid-19 wave may have already peaked in major coastal cities it will take longer to spread through inland centers and rural areas. That’s poised to deepen the usual demand lull around Lunar New Year in late January. There could also be more virus waves to come.

“I think we will see a bumpy and gradual recovery,” said Michal Meidan, director of the China Energy Research Programme at the Oxford Institute for Energy Studies. Officials may prioritize health and social spending over infrastructure, and economic uncertainty means consumer and household spending will take time to materialize, she said.

As well as the end of Covid Zero, the extent to which Beijing steps up with supportive economic policies will be crucial for commodities demand. The volume of new credit is likely to rise to a record this year, according to analysts cited by the state-owned Economic Information Daily on Wednesday.

“We expect monetary loosening this year,” Shanghai Dongwu’s Jia said. More stimulus and infrastructure spending will likely be unveiled at the National People’s Congress in March, she said.