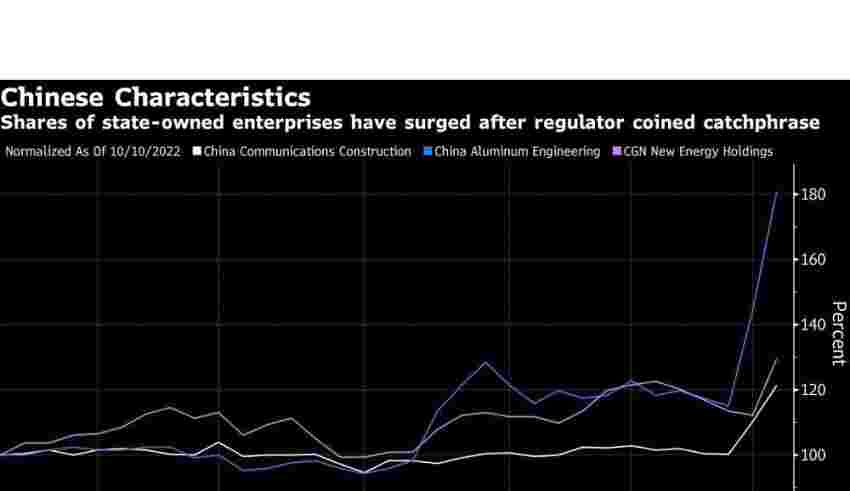 (Bloomberg) — A new term coined by China’s securities chief has investors debating whether it implies a premium for state-owned firms and companies better aligned with national goals.

A “valuation system with Chinese characteristics” has become the latest buzzword, after China Securities Regulatory Commission Chairman Yi Huiman devised the term during a speech this week and proposed a new method of valuing state, private and foreign controlled firms.

In his remarks, Yi singled out state-owned enterprises and state-owned financial institutions, saying they accounted for nearly half of the onshore market capitalization, which “shows their pillar role in the economy.”

Markets have taken note, with large SOEs posting big jumps. China Communications Construction Co. surged 10% in each of the past two sessions, China Aluminum International Engineering Corp. soared more than 50% during that period in Hong Kong, while CGN New Energy Holdings Co. gained as much as 22% on Wednesday.

“The emphasis from Chairman Yi has been on financial markets to better support the real economy, and that could pertain to undervalued SOEs,” said Zhang Xia, chief strategist at China Merchants Securities Co. “It could also refer to areas of higher end development that policies are encouraging, such as higher end manufacturing.”

Financial markets may lean toward areas that China is championing, and this could involve a reassessment of how to price SOEs, Zhang added.

China Communications Construction is trading at 6.2 times forward earnings, while China Railway Group is at just over 4 times in Shanghai. That compares with a multiple of 11 for the benchmark CSI 300 Index.

Still, some investors say Yi’s remarks may signal a move away from market-oriented reforms and others caution that the rally in SOE stocks is unlikely to last.

“The gains in the handful of SOEs is likely the result of some looking for a new speculative trade in the absence of a clear trend for growth and a lack of real investment opportunities during a time of confusion, rather than buying up these stocks in earnest,” said Zhang Fuzhen, senior analyst at Shanghai PD Fortune Asset Management LLP.

“If this were really about something deeper, like a fundamental shift, the broader gauge of confidence would have taken a much bigger hit,” he said.