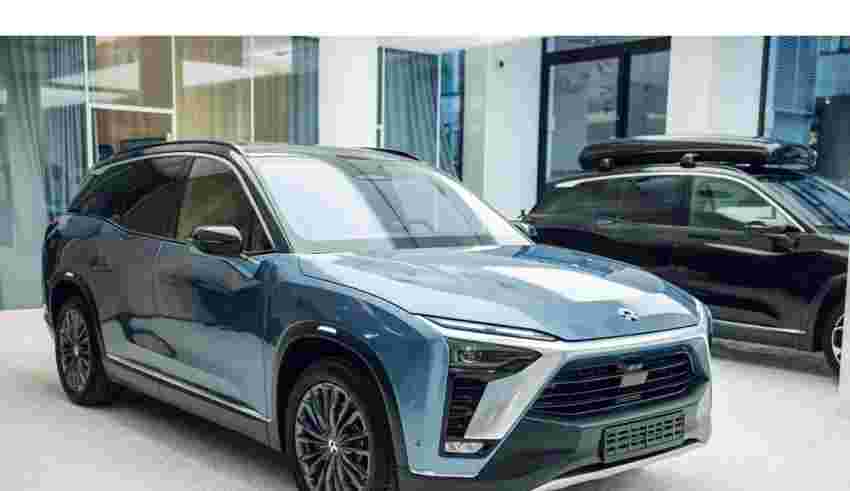 Chinese electric vehicle maker Nio Inc. unveiled two models at a glittering annual customer event on Saturday evening, expanding its lineup in a bid to grab a bigger share of the market as demand for cars in the nation slows.

At the weekend event in Hefei in central Anhui province, Shanghai-based Nio launched a revamped ES8, an iteration of the original electric sports utility vehicle it’s been selling since 2018, and a new pure electric coupe dubbed the EC7.

With a starting price of 488,000 yuan ($69,800), the coupe targets buyers who want more space as well as sporty performance. The new ES8 will start at 528,000 yuan. Deliveries are expected to kick off in May and June, respectively.

Nio Day, first held in 2017, is a gathering for corporate partners, customers and media meant to foster brand loyalty and a sense of community around the carmaker.

Nio on Saturday also presented its latest generation of battery swapping stations, which allow drivers to quickly swap out their battery for a new one instead of recharging the existing one. Each of the upgraded stations allows a maximum of 408 swaps per day, and can store as many as 21 replacement cells.

In addition, the company demonstrated a power swapping pilot for highways, with which the driver can stay inside the car and leave it all up to the vehicle to automatically plan the route for changing batteries, driving to the closest available power swap stations through intelligent navigation, completing the swap, and driving out of the service area, back onto the highway.

About 4,000 participants from across China attended the gala, despite surging Covid cases in various cities. As many as 248 million people, or nearly 18% of the China’s population, likely contracted the virus in the first 20 days of December, Bloomberg reported earlier.

In a year in which China’s major auto shows were delayed or canceled, Nio rewarded its followers not only with the new models, but also a concert featuring local pop singers, as well as short films and a charity bazaar.

Nio delivered 106,671 vehicles in the first 11 months of the year, up almost 32% from the same period of 2021. Even so, annual deliveries are expected to miss its original target of 150,000 units given the challenges posed by the pandemic and China’s strict adherence to a Covid Zero policy for much of 2022.

The company was particularly hard hit by Shanghai’s two-month lockdown in the spring. The restrictions forced a temporary suspension of production at Nio’s plant in Hefei, and kept consumers away from showrooms.

Read more: Not a Single Car Was Sold in Shanghai Last Month

Nio shipped only 12,098 vehicles in April and May, and by October had fallen behind on both producing and delivering thousands of vehicles due to component supply shortages and disrupted logistics caused by regional lockdowns.

The company continued to face challenges from of sick workers after China recently lifted the Covid restrictions, founder and Chief Executive Officer William Li said in an interview with BloombergTV after the show. “We and our suppliers are both affected under the latest wave,” Li said, adding that the overall supply chain “should be stabilized next March or April.”

The run of extraordinary conditions have put pressure on Nio’s progress toward turning a profit. To help mitigate spiraling costs and better control its own destiny, the company is establishing a research and development center that will concentrate on lithium-ion batteries and packing technologies. It also plans to spend around 3 billion yuan each quarter on R&D, with a focus on chips and batteries.

Li also noted panic buying of semiconductors, and called for all carmakers and suppliers to “reasonably place orders for chips.”

While China is the world’s biggest market for EVs, with almost one in every five cars sold now electric, consumer demand has been flagging. Some EV subsidies also fall away at the start of 2023 and that’s expected to make buying a cleaner car less attractive versus a gasoline model, which are still ubiquitous and affordable.

Deliveries of new-energy vehicles — pure electric and hybrid cars — to dealerships in China are expected to reach 6.5 million by the end of the year, and may touch 8.4 million in 2023, China’s Passenger Car Association said at a briefing earlier this month. But the year-on-year growth rate is slowing.

There’s also a lot more competition in China for EVs.

Warren Buffett-backed BYD Co., along with Tesla Inc., lead the market but there are scores of other companies selling electric cars. That includes SAIC-GM-Wuling Automobile Co., Zhejiang Geely Holding Group Co., Guangzhou Automobile Group Co. and Hozon New Energy Automobile Co. All told there are about 500 electric car models in China and most foreign auto brands also have an electric offering.

Nio, which has said it aims to break even in 2024, needs to expand its product lineup to better compete. Exporting its cars into Europe is also a big part of its strategy.

Following a year of modest sales in Norway, Nio will offer three models in Germany, Denmark, Sweden and the Netherlands, it said at an event in Berlin in October.

Nio’s US-listed shares are down almost 65% this year.