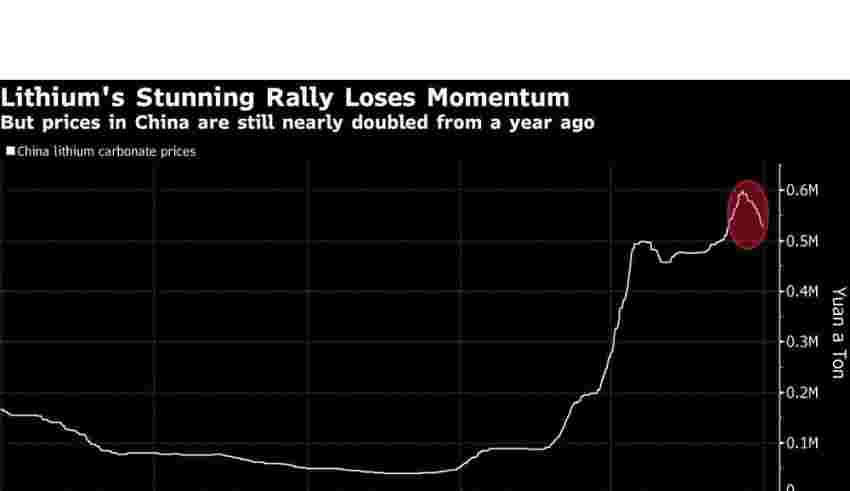 (Bloomberg) — Lithium’s going to get less expensive in 2023, according to a Chinese supplier of the battery metal, potentially offering some relief to electric-vehicle makers squeezed by soaring costs.

Prices have already softened after a spectacular two-year rally labeled “insane” by Elon Musk and “unreasonable” by China’s BYD Co. The cool-off is poised to continue as more supply emerges to trim abnormally high margins for lithium producers, Wang Pingwei, chairman of Sinomine Resource Group Co. said in an interview.

“We believe the gradual, downward trend for lithium will continue next year,” Wang said, predicting a fall of around a quarter from current levels that will still leave the company with “good” profits. Prices won’t fall off a cliff as the market remains tight, said Wang, whose company operates mines in Zimbabwe and Canada.

Lithium’s relentless rise since 2020 has hurt buyers and contributed to the first annual increase in battery costs since BloombergNEF started tracking them nearly a decade ago. Benchmark prices in China are still about twice as high as the start of 2022 — despite declining this month — as demand from the fast-expanding EV sector outstrips supply.

Sinomine’s Wang said he sees lithium carbonate prices drifting to about 400,000 yuan a ton in 2023. That compares with 527,500 yuan at present and a record of nearly 600,000 yuan in mid-November, according to data from Asian Metal Inc. The lower level would still offer good margins for Sinomine, he said.

Wang’s comments echo some other forecasts. More mine supply will push the market into a surplus next year and help soften prices, BYD’s Executive Vice President Stella Li said earlier this month. China’s withdrawal of EV credits, as well as uncertainties over the pandemic and global economy, are also weighing on the outlook.

“Over the next 6 months, demand softness is likely to dominate the lithium price discussions as demand in China is challenged by zeroing subsidies and surging Covid-19 cases,” Alice Yu, senior analyst at S&P Global Market Intelligence said by email. “Consumers in the West face growing affordability issues.”

Sinomine wants to expand output worldwide, just as geopolitical tensions are growing with the US, Canada and others moving to restrict China’s role in the EV supply chain.

Wang’s firm was one of three Chinese companies ordered by Canada to divest stakes in Canadian-listed firms under tougher rules for foreign investment. Separately, it still owns the Tanco mine in Canada, as well as the Bikita lithium site in Zimbabwe.

“Our confidence to invest in more mines in North America is relatively low at present,” Wang said.

The company is currently in talks for potential projects in South America, and will continue to look for opportunities in Africa, where developing mines is easier than other jurisdictions, he said. Central Asia is another prospect — including Afghanistan once the security situation improves there, he said.

Sinomine currently has 25,000 tons of annual production capacity for battery-grade lithium hydroxide and carbonate. The company expects that to increase to 60,000 tons next year, and targets 100,000 tons capacity by 2025, Wang said.