Summer’s off to a great start for Chris Pratt!

His movie “Jurassic World: Dominion” has already raked in a half-billion dollars, and now he’s promoting his new show “The Terminal List.”

“Extra’s” Billy Bush spoke with Chris about the series, as well as how he stays humble with all of his Hollywood success. 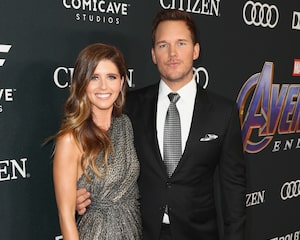 Joined by his co-star Taylor Kitsch, Pratt commented, “I think, like, you know, kids have that effect. She wakes me up and I’m like, ‘Hey, ‘Jurassic World’ just opened and no, you don’t care. Okay, cool. So we’re gonna change that diaper. Alright, it’s fine.’ You know, kids don’t seem to seem to care that it was a big week for us.”

Unlike many new parents, Chris has been able to get “some pretty good sleep” while making sure their oldest daughter Lyla sleeps through the night. He added, “Lyla, for the most part, does very well… I’m pretty blessed.”

He noted, “Katherine is focusing on our youngest daughter.”

He celebrated his birthday by having “pizza three times.”

In “The Terminal List,” Chris plays a Navy Seal with major PTSD after his entire platoon is killed in an ambush.

Billy brought attention to the brotherhood aspect of the show. Chris commented, “Our goal really was for them to be able to watch this and go, ‘Wow, Hollywood finally  got one right,’ you know?… We were surrounded by people who were gonna pick up authenticities.”

When Billy expressed excitement about Chris and Taylor sharing the screen together, Taylor said, “That’s what we are saying.”

Chris chimed in, “We were just talking about that.”

Pratt also praised Kitsch for getting into “incredible shape” for the series.

To get into shape for the series, Taylor stressed the importance of “a fine balance” of working out and eating pizza.

Chris joked that they didn’t have “a wardrobe department” after Billy mentioned the shirtless scenes!

Czar Joe Biden is scheduled to speak in Fort Lauderdale and Orlando next week. Gubernatori…