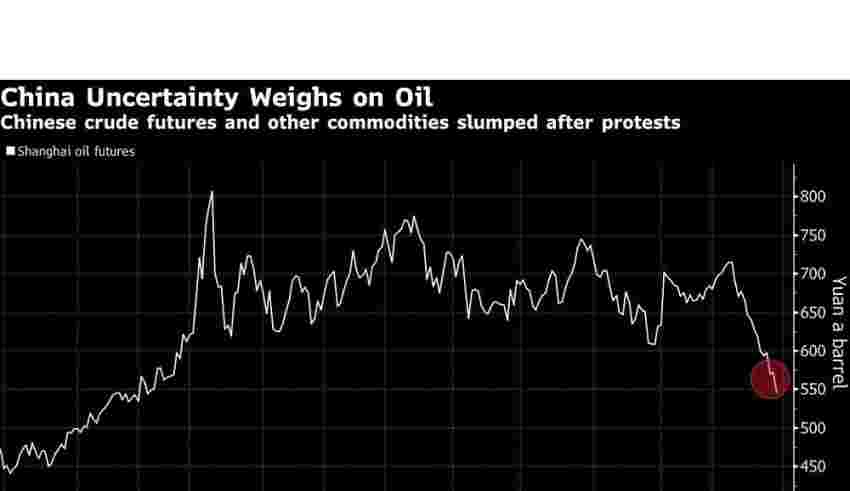 (Bloomberg) — Commodities sank as China’s Covid outbreak worsened and a series of stunning street protests in cities across the nation threaten to derail economic activity and sap demand for energy, food and raw materials.

Base metals in London and Shanghai dropped, with Chinese copper futures declining as much 1.7%. Iron ore in Dalian fell as much as 2%. Crude oil in Shanghai followed international markets lower, plunging as much as 5.4%. Cooking oil futures in Dalian tumbled as much as 3% on concerns over the threat to demand at restaurants and hotels already reeling from lockdowns.

Fears over China’s worsening virus situation and the government’s curbs have overshadowed the impact of Beijing’s latest stimulus measures — a cut in the cash buffers that banks are required to hold — enacted Friday, according to a note from Shanghai Metals Market. Sales at manufacturers are falling just as tighter Covid controls hit the real economy and copper consumption, it said.

The immediate cause of the public’s anger is the government’s restrictive policies to contain Covid, which have been blamed for contributing to a deadly fire in Xinjiang last week. Beijing could respond by further loosening controls — which it has already signaled is its long-term plan — or clamping down even more tightly as it seeks to quell social unrest.

A return to stricter lockdowns would further squeeze demand for a number of key commodities. China is the largest importer of everything from oil to iron ore and soybeans, and purchases have already slowed this year as the economy has stumbled.

An easing of restrictions, on the other hand, should boost the world’s No. 2 economy, supporting demand for fuels and metals and lifting industrial power consumption. In the meantime, the uncertainty has sent investors scurrying for the haven of the US dollar, which puts pressure on international commodities priced in the currency such as crude.

The protests come on the heels of a new set of measures that promised fewer disruptions to containing the disease. But those policies have been immediately tested by China’s worst outbreak since the pandemic began, with officials quickly reverting to lockdowns to control the spread.

That’s affecting factories, hitting demand for raw materials like metals, and the coal and gas that power operations, as well as the diesel needed to transport goods. The risk is that commuter traffic and airline flights also slow to a crawl, further weighing on oil demand.

Congestion data from Baidu showed peak hour traffic in major cities on Monday morning declining sharply from a year ago. In Chongqing, China’s biggest city, traffic fell by half while in Beijing it was down 45% and in Guangzhou it was 35% lower. Chinese oil demand could drop to an average of 15.11 million barrels a day in the fourth quarter, down from 15.82 million barrels in the same period last year, according to an estimate by Gregory Lackner, an oil products analyst with Kpler.

The weekly spot price for coal freighted from the top mining region of Shanxi to the trading hub of Qinghuangdao has fallen by 11% to 1,260 yuan ($174) a ton, according to Cinda Securities. The drop comes as consumption from power generators should be picking up as the first cold spells sweep much of the country.

While power plants may need to burn less coal, rising infections in the country’s three major mining hubs of Shanxi, Shaanxi and Inner Mongolia could reduce output as well, according to local reports. The country’s boom in installing renewable power may also hit a speed bump as workers are kept off job sites by virus measures.

Corn futures in Dalian, meanwhile, climbed to the highest in six months, with supply hampered by Covid control measures that are preventing the new harvest from reaching the market.

The outlook for commodities hinges largely on how China’s Covid Zero policies evolve from here. A broad easing of the rules may not emerge in 2023, according to Bloomberg Intelligence, slowing growth in China’s power demand to just 5%, similar to the expansion seen this year.

—With assistance from Winnie Zhu, James Poole and Sarah Chen.

(Updates with additional material throughout)