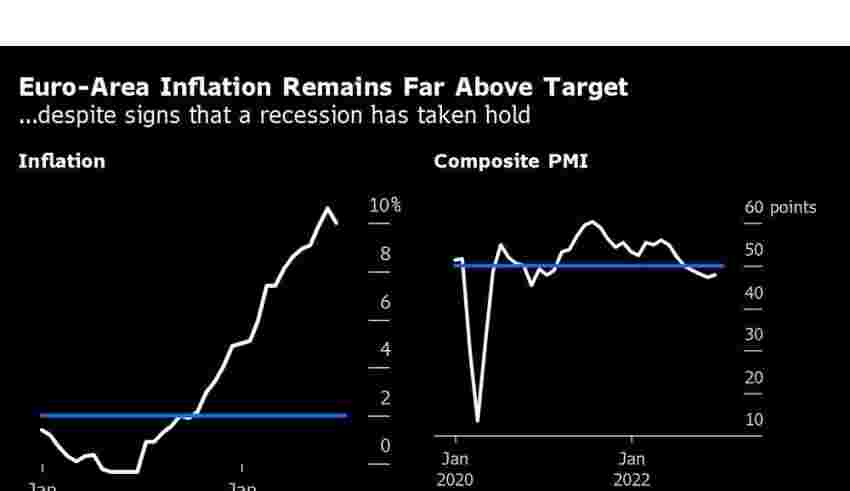 (Bloomberg) — Factories in Europe and Asia struggled in November due to weakening global demand, with the pressure unlikely to let up in the months ahead.

Business surveys by S&P Global on Thursday pointed to shrinking activity and a dire outlook in wide parts of both regions. Asian manufacturers are bracing for a further pullback in spending from US and European customers, where the fastest inflation in decades is weighing on companies and households.

The pace of the euro area’s downturn slowed, however, a signal that a widely expected recession may turn out to be less severe than initially feared. Softer demand also helped ease cost pressures linked to logistical snarls.

“Future output expectations have picked up slightly on improved supply-chain and energy-market signals, the latter buoyed by warmer than usual autumn weather,” S&P Global economist Chris Williamson said in a statement. “But confidence remains amongst the lowest seen over the past decade.”

The global economy is cooling as a result of soaring prices and uncertainty stoked by Russia’s war in Ukraine. Central banks, meanwhile, are continuing to move aggressively to stamp out inflation, weighing on purchasing power.

Manufacturing had just started to recover from pandemic-related lockdowns and supply-chain disruptions, making the global slowdown a rising concern.

While the euro-zone PMI rose to 47.1 from 46.4 in the previous month, it remained below 50 — the line separating expansion from contraction. Germany, the Netherlands and Spain were the report’s worst performers.

Vietnam recorded the sharpest deterioration in Asia. Its PMI fell to 47.4 in November from 50.6 in October — the first time in over a year the gauge dipped below 50.

In Japan, the gauge dropped below that threshold for the first time in almost two years. Electronic hubs Taiwan and South Korea were also sluggish as producers curbed purchasing and inventory amid weaker overseas demand.

The output downturn in Taiwan — whose PMI inched up slightly from October but was still well in contraction at 41.6 — “underscores the weakest performance of the sector since the global financial crisis in 2009,” said Annabel Fiddes, economics associate director at S&P Global Market Intelligence, in a statement accompanying the data.

She said firms are “not anticipating things to improve anytime soon,” based on an “incredibly downbeat” 12-month outlook. “An increasingly challenging global economic environment” of inflationary pressure and tightening financial conditions “is expected to constrain performance in the months ahead.”

In China, a gauge of manufacturing activity jointly published by Caixin and S&P Global on Thursday came in at 49.4 in November, remaining below the 50 mark for a fourth straight month. That followed dismal PMI readings on Wednesday, when official indexes measuring manufacturing and non-manufacturing fell to the lowest levels since the Shanghai lockdown in April.

The impact of Covid flareups and related restrictions was evident, according to the data. Companies reduced purchasing activity and cut staff numbers further as factory output fell at a faster rate than in the previous month amid movement restrictions, S&P Global said in a statement.

There were a couple of positive readings in Southeast Asia, where manufacturing PMIs for Thailand and Indonesia continued to expand — albeit at slower paces in November than the month before. The Philippines was the standout, with a region’s best PMI reading of 52.7.