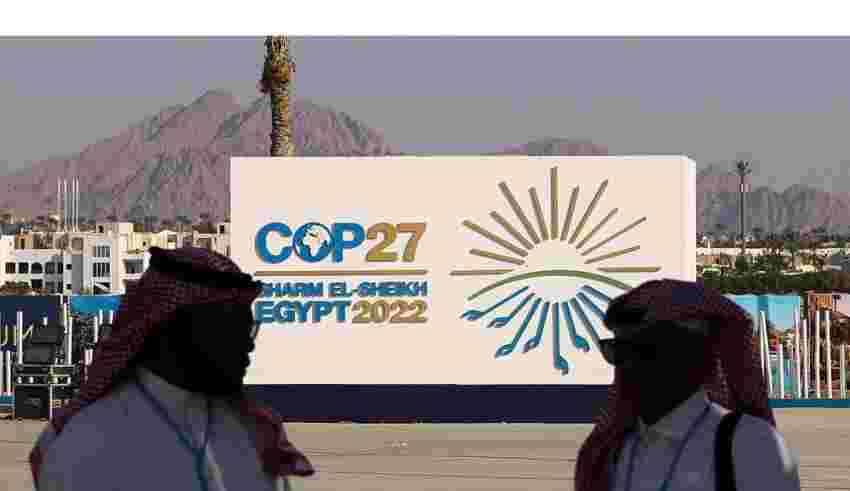 (Bloomberg) — The COP27 climate talks in Egypt, which came close to collapse in the closing stretches, ended with an early-hours deal to create a fund to pay poorer countries for the harm caused by climate change.

The agreement on loss and damage is a landmark moment in global climate politics — an acknowledgment that richer nations are responsible to the developing world for the harm caused by rising temperatures.

But the fractious summit, which took place against the background of a global energy crisis sparked by Russia’s invasion of Ukraine, exposed fault lines on how the world should navigate the transition away from fossil fuels. And it did little to advance the ambitions of last year’s COP in Glasgow to rein in harmful greenhouse gas emissions.

“While progress on loss and damage was encouraging, it is disappointing that the decision mostly copy and pasted language from Glasgow about curbing emissions, rather than taking any significant new steps,” said Ani Dasgupta, chief executive officer at the World Resources Institute. “It is mind-boggling that countries did not muster the courage to call for phasing down fossil fuels, which are the biggest driver of climate change.”

Final agreement came after 9 a.m. local time following a marathon final session that went through the night. The closing day started with a threat from the European Union to walk out if the text didn’t strengthen ambition to reduce carbon dioxide emissions and in the end there was no blanket pledge to phase down all fossil fuels and no target to see global emissions fall by 2025. German Foreign Minister Annalena Baerbock complained about stonewalling from “an alliance of oil-rich nations and major emitters.”

Still, the agreement on loss and damage is a breakthrough, even if it’s not clear how a fund will be financed or structured. It came after a flurry of last-minute negotiations over how to address the increasing toll climate change is exacting from developing nations that have contributed little of the emissions driving the phenomenon. The issue took on new urgency following monsoon flooding this summer in Pakistan that left more than 1,700 dead and caused at least $30 billion in losses.

Just getting the issue on the formal negotiating agenda was seen as a milestone. Even then, it appeared unlikely that COP27 talks would result in a new loss and damage fund.

“We have struggled for 30 years on this path and today, in Sharm El-Sheikh, this journey has achieved its first positive milestone,” said Pakistan Climate Minister Sherry Rehman. “The establishment of a fund is not about dispensing charity. It is clearly a down-payment on the longer investment in our joint futures.”

Looking ahead, COP President Sameh Shoukry pledged to work out what a loss-and-damage fund will look like over the next year before handing the presidency over to the UAE. The Sharm El-Sheikh agreement calls for a committee with representatives from 24 countries to lay out which countries and financial institutions should contribute, and where the money should go. The committee will have two co-chairs, one from a developed country and one from a developing country.

At the same time, the global energy squeeze is unlikely to make the task of reducing fossil fuel emissions any easier and Baerbock’s comments highlight one of the core tensions in the global climate debate after Saudi Arabia and others resisted language calling for a broad phase out of fossil fuels.

“It is more than frustrating to see overdue steps on mitigation and the phase-out of fossil energies being stonewalled by a number of large emitters and oil producers,” said Baerbock. “The world is losing valuable time to move towards 1.5 degrees” Celsius, she said, referring to the Paris Agreement’s goal of limiting rising temperatures.

That disappointment was shared by some of the countries most widely impacted by climate change and rising sea levels.

“We have heard the majority of parties over 80 countries attending this COP voicing their concern and support for stronger mitigation action,” said Prime Minister Kausea Natano of the Pacific Island nation of Tuvalu. “But that is not reflected in the cover decision before us and that is our challenge for the next 12 months leading to Dubai.”

—With assistance from Laura Millan Lombraña.

(Updates with details from 8th paragraph)