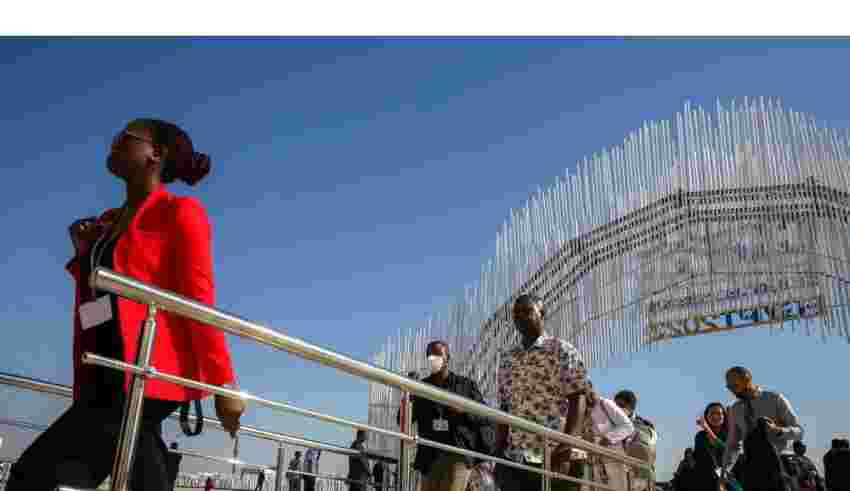 (Bloomberg) — The COP27 climate talks in Egypt hung in the the balance on Saturday afternoon as the European Union insisted the world toughen its ambition for reducing fossil fuel emissions.

Progress was made on the issue of loss and damage after the latest draft agreement established a new fund to compensate poor countries for the cost of climate disasters. But without stronger language on mitigation of greenhouse gases and a pathway to limiting global warming to 1.5 degress Celsius, it wasn’t clear whether the EU and other developed nations would sign up to the whole deal.

The day started with a threat from EU climate chief Frans Timmermans to walk out the negotiations in the Red Sea resort of Sharm El-Sheikh, risking the prospect of the first annual COP meeting without a deal for more than a decade. He has been a prime mover at the summit, trying to unlock progress through a grand bargain exchanging the promise of loss and damage cash for a harder line on emissions.

“The EU is united in our ambition to move forward and build on what we agreed in Glasgow,” Timmermans said, flanked by a group of European energy ministers. “Our message to partners is clear: we cannot accept that 1.5C dies here and today.”

An open plenary session to take stock of negotiations was expected in the late afternoon — a chance for delegations to air their outstanding demands.

“The text isn’t moving us forward on mitigation ambition from where we were in Glasgow,” said David Waskow, director of the World Resources Institute’s international climate initiative. “But where we have seen a shift here and where we are going beyond Glasgow is on loss and damage, and I don’t think that should be lost in the mix. That is an important step forward.”

Saturday also brought the resumption of climate cooperation between China and the US, a further sign that the meeting between presidents Xi Jinping and Joe Biden at the G20 in Bali thawed relations between the world’s two largest emitters. China’s chief negotiator Xie Zhenhua made the announcement in a press briefing. His US counterpart John Kerry is isolating becuase of a Coid infection.

“Today, we have agreed that after this COP we will continue our formal consultation,” Xie said.

Talks on climate were suspended after Speaker Nancy Pelosi’s visit to Taiwan earlier this year.