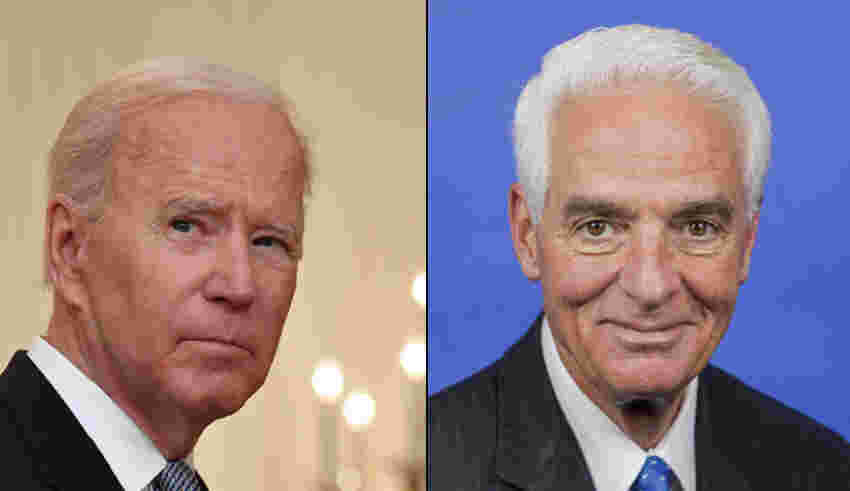 PORTSMOUTH, OH –  Hmmm. These two geezers will have to promise to pay for a sunny vacation to bus Dems to Orlando from outside of Florida. Free tickets to Disneyland for all Lefty liberals, but don’t leave until my speech is over or my FBI guy with hunt you down – Mickey nor Minnie can save you.

Czar Joe Biden is scheduled to speak in Fort Lauderdale and Orlando next week. Gubernatorial candidate Charlie Crist will join in the mayhem (I mean to say merriment). “I think he’s great. I think he’s doing a great job. He’s my friend. And I’m very proud of him. And he’s going to give our campaign a real shot in the arm,” declared Crist.

I wouldn’t follow either one of them in a line for free chocolate pudding at a senior citizen center. Being over 60 years myself, allows jest at other agers – especially pudding jokes.

Congresswoman and U.S. Senate candidate Val Demings, whose congressional district includes parts of Orlando, will not be attending, reports the Florida Phoenix.

Most Democrat contenders want to distance themselves from Biden, but not look-at-me Crist. Maybe they’ll perform a song and dance routine for the crowd.

Here’s a Funny Old People Dancing Compilation video the bad boys can use to practice.

Of course, Biden-the-Belittler will bash Gov. Ron DeSantis and former President Donald Trump. But, will he raise his wrinkled and weak fists in the air and insult conservative Republicans again? I cast my vote as yes, indeed.

“Biden has made some particularly divisive remarks at these events about his political opponents. While at a DNC fundraiser in Rockville, Maryland, late last month he referred to Republicans and their philosophies as “semi-fascism.” A week later, he would go on to demonize “MAGA Republicans” at an inherently political speech outside Independence Hall in Philadelphia,” according to a recent article in Townhall.

Moreover, Biden will probably spew ad nauseum about the migrants flown to Martha’s Vineyard, a sanctuary city, without one word about the dangerous border problems he’s created.

Perhaps, First Lady Jill can take Joey on an airboat tour through a swamp to see gators and pythons. Don’t forget to fasten his safety belt. Oops.