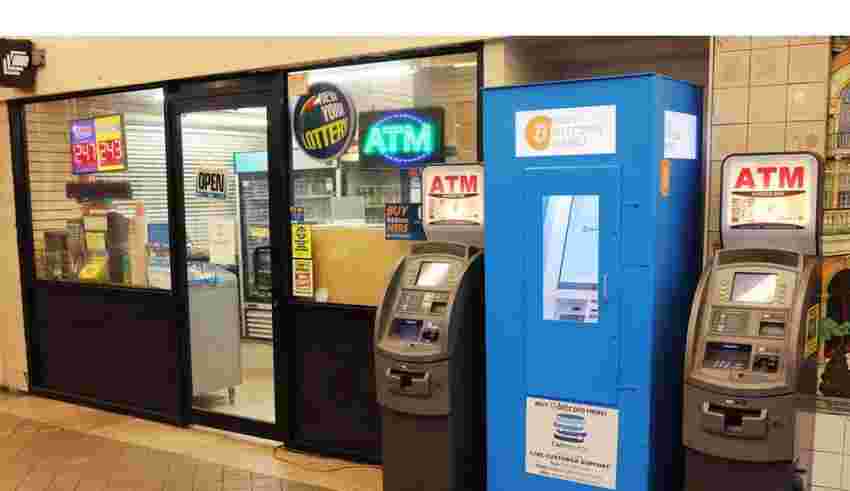 (Bloomberg) — Amherst County, Virginia, doesn’t have a hospital. It does have a Bitcoin ATM.

It’s inside the Dogwood Express Market, a convenience store just down the road from the local used-car dealership. The machine lets people buy, receive and send Bitcoin, the largest cryptocurrency.

Whether they choose to do so, however, is another matter. “I’ve never seen anybody even use it,” Chrissy Scruggs, a 27-year-old employee at the Dogwood Express, said in October.

Since the first Bitcoin ATM was installed almost a decade ago, the number of machines proliferated, impervious to cryptocurrencies’ boom-and-bust cycles. From the bustling streets of New York City to rural communities like Amherst County, they popped up everywhere, physical symbols of crypto’s growing mainstream appeal.

Then came 2022, and a “crypto winter” that sent Bitcoin plunging 64% and swept away companies from Celsius Network to Sam Bankman-Fried’s FTX. The number of crypto ATMs in the US peaked at just over 34,000 in August and has since dipped slightly, according to Coin ATM Radar, which tracks the machines. September marked the first month in the industry’s history that more ATMs were retired than installed, Coin ATM data show (October saw a small rebound).

Even worse, the amount of money the average machine handles has fallen sharply, calculations by Bloomberg News based on available industry data show.

The total amount of money funneled through crypto ATMs globally, expressed in dollars, fell to $230 million in October from $349 million in January 2021, according to data from researcher Chainalysis. The drop came even as the number of machines installed worldwide almost tripled in the period. That implies a roughly 75% decrease in the value the average unit generates.

Many ATMs now get little, if any, use. At the Smoke Shop convenience store in midtown Manhattan, there’s one tucked away between shelves of soda and snacks. Syed Alam, who works at the store, said he doesn’t pay much attention to the machine. At noontime on a recent Friday, he reckoned at least one person had used it that day. Every two weeks or so, someone comes to collect cash from the unit.

With demand waning, executives who had been used to plugging in units as fast as they could negotiate new leases are facing tougher choices.

Coin Cloud, which runs about 5,000 ATMs across the US and Brazil, has tapped advisers to help it rework about $125 million of debt accumulated to fund an aggressive expansion, Bloomberg News reported in November. The company has been seeking additional funding from troubled crypto brokerage Genesis, people familiar with the matter said.

Some of Coin Cloud’s kiosks are in rural areas with weak foot traffic, according to people with knowledge of its business. Coin Cloud declined to comment on its efforts to secure funding. Chief Executive officer Chris McAlary said in October that the firm hasn’t had to reduce its number of machines.

“You have to be more selective about the location than two years ago,” said Ben Weiss, CEO of rival CoinFlip. “You want locations that have long hours and high foot traffic.” CoinFlip hasn’t had to pull any machines this year and its revenue is rising, Weiss said in October, without giving details.

Running lots of underutilized machines can be costly. Operators negotiate rent individually with outlets, although some pay store owners a percentage of the revenue a unit generates, according to Eric Grill, CEO of crypto ATM manufacturer ChainBytes.

Grill also owns four crypto ATM companies that between them operate “a couple hundred” machines globally. He said his businesses typically pay stores around $300 a month to host a machine, but depending on how much money a unit brings in, the fee can reach as high as $1,000.

Crypto ATMs in the US generate anywhere between $1,000 and $10,000 in revenue per month, Grill said in early November. He estimated that 3% to 6% of that goes to operating costs such as rent, marketing and paying compliance officers and the people who collect money from the machines.

Executives interviewed for this story expressed confidence in their businesses even if the sentiment around digital assets has soured. Transaction volumes aren’t as vulnerable to market swings as at crypto exchanges, for example, they said.

The machines also offer a fast and convenient — and often anonymous — way into the world of digital assets. Grill’s companies require neither phone number nor identification for transactions of less than $500.

In part because of those attributes, crypto ATMs generate juicy fees, ranging from 11% to 25% according to operator Coinsource.

“A lot of people are just trying to be conservative,” said Brandon Mintz, founder and CEO of Bitcoin Depot, which Coin ATM Radar ranks as the largest crypto ATM operator in the US. Bitcoin Depot has slowed the pace of installing new units and is focusing on moving underused machines to better-performing locations.

Mintz plans to take Bitcoin Depot public by merging it with a special purpose acquisition company, or SPAC. In an August press release announcing the deal, Bitcoin Depot said it runs over 7,000 “kiosk locations” throughout the US and Canada. The company generated $6 million in net income on sales of $623 million in the 12 months through June, according to the statement, which didn’t give year-earlier comparisons for the unaudited figures.

Bitcoin Depot owed $42.4 million under a term loan bearing a 15% interest rate as of June 30, according to a proxy statement. That compares with a 10% yield on a US leveraged loan index.

The proposed deal, scheduled to close in the first quarter, values Bitcoin Depot at $885 million. Mintz said in a Nov. 22 email that the deal is still on track and that “the company has remained unaffected by the fluctuations in the industry.” He also said Bitcoin Depot is “comfortable” with its financial position and ability to repay debt.

One potential threat comes from regulators. Singapore in January banned crypto ATMs and ordered them shut down. In March, UK authorities said they hadn’t approved any machines and warned operators to remove any units still in use.

In the US, regulators have so far taken a hands-off approach. But in a report originally issued in September 2021, the Government Accountability Office said crypto ATMs can be used to facilitate drug trafficking. It has recommended that the Treasury Department’s Financial Crimes Enforcement Network and the Internal Revenue Service should review registration requirements for the machines. Both agencies agreed.

Whatever the outcome of that process is, a more immediate challenge for ATM operators may be to convince landlords that hosting a machine is still worth the trouble, even as usage cools.

Louis Pena, manager of the Orion Electronic store in the Bronx, guesses his machine gets something like one visitor a day. He’ll take it — it’s a potential customer, after all — and he has no plans to get rid of the ATM. But his patience isn’t infinite.

“When they start not giving me customers, it doesn’t make sense to have it,” he said.

—With assistance from Justina Lee.